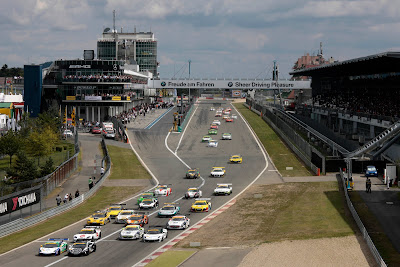 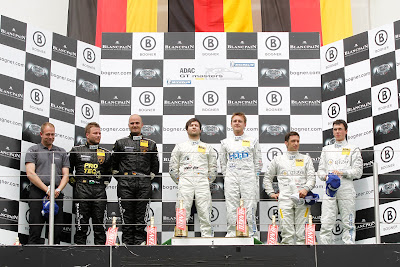 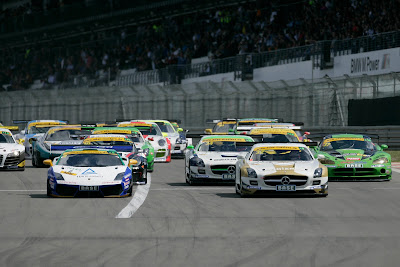 Stuck brothers take championship lead, first Mercedes victory on Sunday
ADAC GT Masters impress 212,000 Truck GP fans at Nürburgring
The ADAC GT Masters appearance at the ADAC Truck Grand Prix at the
Nürburgring was a complete success. The 212,000 fans were treated to a pair of
hard fought sportscar races during the event weekend. The Stuck brothers
Ferdinand (20, AUT) and Johannes (24, AUT) won Saturday’s race in the Team
Reiter Lamborghini Gallardo and in doing so defended their championship lead
despite retiring on Sunday. Former Champ Car driver Andreas Wirth (26, GER)
and Christiaan Frankenhout (29, NED) presented the Mercedes SLS Gull Wing
racer with its first ADAC GT Master’s race victory on Sunday.
In Saturday’s race the Stucks produced a perfect start-finish victory on the
traditional Eifel track’s 3,629 meter sprint circuit. However, they had to put in an
hour of hard work for this triumph. “This was certainly one of the closest ADAC GT
Masters races ever,” said a breathless Johannes Stuck. His brother Ferdinand
drove the opening stint but was unable to pull away from his closest rival Dominik
Baumann (18, AUT) especially after a safety car period stacked up the field again.
At the flag only 1.4 seconds separated the winners from Baumann and his team
mate Harald Proczyk (35, AUT) in the HEICO MOTORSPORT Mercedes-Benz
SLS. “The tyres deteriorated heavily towards the end of the race and I lost some of
our cushion,” said Johannes Stuck. The podium was completed by Andreas
Wirth/Christiaan Frankenhout who scythed through the field with a series of
spectacular overtaking manoeuvres from twelfth on the grid in the Gull Wing
Mercedes. On the penultimate lap Frankenhout forged past the a-workx-Akrapovic-
Porsche 911 of Sebastian Asch (25, GER) and Michael Ammermüller (25, GER) to
take third place.
The Wirth/Frankenhout duo’s surge to the front was unstoppable in Sunday as
well. This time their fight back took them from ninth on the grid to the first ADAC
GT Masters victory for the duo, the team and the Mercedes Gull Wing racer.
Victory for the brand with the star and HEICO MOTORSPORT was completed by
the previous day’s second place finishers Baumann/Proczyk who forced the ABT
Audi duo Christopher Mies/Luca Ludwig (GER) from third place on the final lap.
Finishing in second between them was defending champion Albert von Thurn und
Taxis and team mate Philip Geipel in a Reiter Lamborghini.
Former Formula 1 star Heinz-Harald Frentzen (44, GER) was also rapid. He
handed over the Callaway-Corvette to Sven Hannawald (36, GER) in third place.
However, the ski jump Olympic winner left the track while fighting for position and
was classified a lap behind in 29th place. Alexandros Margaritis (26, GRE) and
Dino Lunardi (32, FRA) who arrived as championship leaders had a weekend to
forget. On Saturday their BMW ALPINA fielded by LIQUI MOLY Team Engstler
retired with damaged suspension following a barging match, on Sunday they were
twentieth after receiving a time penalty.
In the standings Margaritis/Lunardi with 83 points lie eight points behind the new
leaders Stuck/Stuck at the half-way stage of the season. Following closely behind
are the two ABT pairings of Mies/Ludwig (79 points) and Jens Klingmann/Christer
Jöns (GER, 75 points). They were the only ones to claim a useful result at the
weekend with a fifth place behind their team mates on Sunday. Sunday’s winners
Wirth/Frankenhout moved right into the thick of the title battle with 70 points.
Marc A. Hayek heads up the amateurs. The 40-year old Swiss racked up the most
amount of points in both races at the Nürburgring alongside Peter Kox (47, NED).
They also scored points for the overall standings after taking a fifth and ninth
position.
The next ADAG GT Masters event is during the ADAC Masters Weekend at the
Red Bull Ring (AUT) between 12 and 14 August.
ADAC GT MASTERS PRESSE.
Posted by AmigosRacing/MRS GT. at 19:25