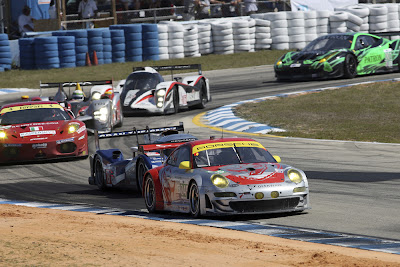 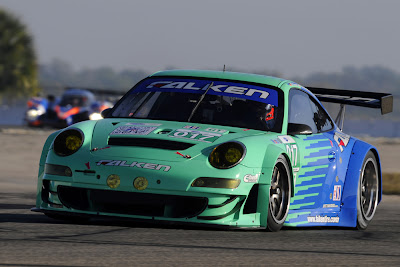 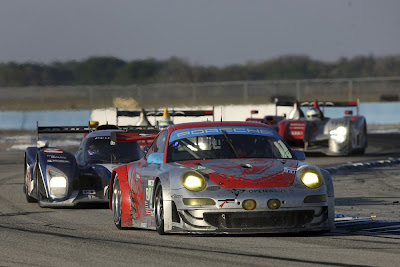 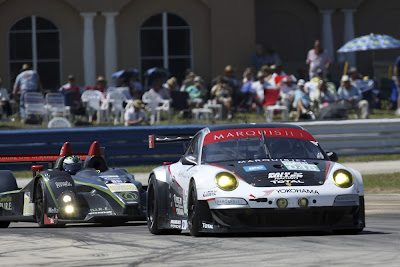 Porsche pilots hope for first podium result of the season

Stuttgart. The American Le Mans Series picks up the pace. After a break for the Le Mans 24 Hours, round three of the race series with the world’s fastest sports cars now takes off on 9th July in Lime Rock in the US state of Connecticut. Lining up on the grid is the five-time Lime Rock winner Joerg Bergmeister (Germany). At the wheel of the Porsche 911 GT3 RSR, Bergmeister and his Porsche works driver teammate Patrick Long (USA) are hoping for their first podium result of the season.

The Northeast Grand Prix has been a permanent fixture on the American Le Mans Series calendar since 2004. Many fans are happy to travel the two and a half hours from New York City to witness the often very entertaining race. On one of the hills alongside the track stands a small church in which a service is held on Sundays. For this reason, races are traditionally contested on Saturdays.

The 2.478 kilometre circuit in the picturesque countryside of Connecticut is the shortest in the American Le Mans Series. The lap times are far under a minute. The surrounding grassy hills serve as grandstands, with most of the spectators bringing their own camping chairs and coolers to witness the race action.

Quotes before the race

Hartmut Kristen, Porsche Head of Motorsport: “The season really gets going now in USA. The last race was before the break for the Le Mans 24 Hours in April, so it’s almost like a second season-opener for the teams. If they want to look good for the crucial phase of the season, they’ll need to pull out all stops in Lime Rock.”
Joerg Bergmeister (No. 45, Porsche 911 GT3 RSR, Flying Lizard Motorsports): “Lime Rock seems to really suit our car. I’ve won on this track five times in a row – that’s not such a bad track record. With 30 cars on this narrow circuit you have to concentrate totally over the whole distance, you have to use your head if you want to reach the flag in such heavy traffic without bruises. It’s always worked out well in the past. Still, a little bit of luck is always part of it.”
Patrick Long (No. 45, Porsche 911 GT3 RSR, Flying Lizard Motorsports): “There are normally loads of safety car phases in Lime Rock. And no wonder with all the traffic. This is a huge challenge for our strategists. The pit stops have to be carried out quickly, the right timing can mean the difference between victory or defeat. But our boys at Flying Lizard Motorsports know how to do pit stops – they’ve proven that often enough.”
Wolf Henzler (No. 17, Porsche 911 GT3 RSR, Team Faken Tire): “The track is very short, and hence the traffic is heavy. You’re constantly overtaking slower cars and you being overtaken by the faster sports prototypes. Lime Rock is not exactly a favourite of mine. But I have good memories of last year when we qualified in second in the rain. Hopefully, it’ll rain again this year. We used the Le Mans break well and tested at Road America and in Mid-Ohio. The team has invested a great deal into tyre development. That makes me optimistic for the rest of the season.”
Marco Holzer (No. 44, Porsche 911 GT3 RSR, Flying Lizard Motorsports): “This is my first race in Lime Rock and I’m looking forward to getting to know another race track in the USA. The team sent me a DVD of onboard footage and loads of data – so at least I can prepare myself a bit.”

The most successful GT race car of the last years takes off into the season with a raft of improvements. The output of the four-litre, six-cylinder boxer engine has increased to 455 hp (335 kW). Priority in the further development of the car was given to the newly designed aerodynamics at the front and rear. In 2010, the 911 GT3 RSR again won the environmental "Michelin Green X Challenge” classification as the GT vehicle with the best overall efficiency in the American Le Mans Series.

In the history of the American Le Mans Series, Joerg Bergmeister is the most successful driver at Lime Rock. At the last five races he claimed victory every time for Porsche in the GT and later the GT2 class. Patrick Long was his teammate for three of these wins, Wolf Henzler once. With the RS Spyder sports prototype, Porsche celebrated three class wins on this track as well as an overall victory in 2007.

The race in Lime Rock starts on Saturday, 9 July, at 14.05 hrs local time (20.05 hrs CEST). The GT qualifying on Friday will be broadcast on the internet on Friday from 21.45 hours CEST on www.porsche.com/alms-live.

The American Le Mans Series (ALMS) was created in 1999 for sports prototypes and GT vehicles. The regulations correspond to those of the Le Mans 24 hour race. All classes start together but are classified separately: