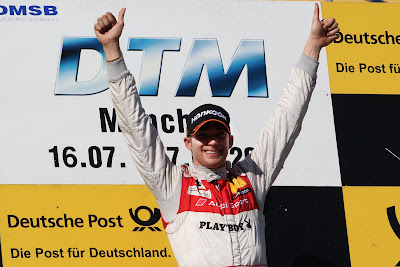 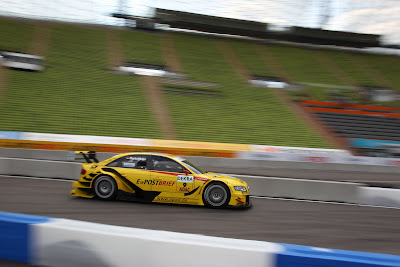 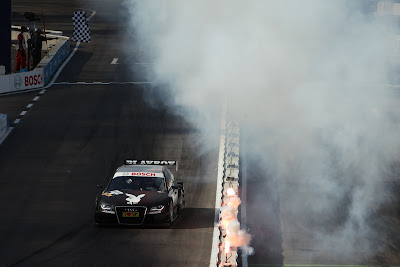 Audi wins “race of marques”
• Edoardo Mortara is the winner of the day at the DTM debut in Munich
• Italian defeats leader of the standings Bruno Spengler
• Pole position for the Audi A4 DTM
Ingolstadt/Munich, July 16, 2011 – Fireworks for Edoardo Mortara: In front of an
outstanding crowd the Italian won the “race of marques” at the DTM debut in
Munich’s Olympic Stadium for Audi. At the thrilling finale for the day’s victory he
defeated DTM leader of the standings Bruno Spengler.
The first day at the DTM’s public show event in Munich’s Olympic Stadium was billed
as “race of marques”. In internal duels on the 1.190-kilometer track the best drivers
of the two automobile manufacturers were determined first. An Audi and a
Mercedes-Benz first met at the day’s finale. And this prestigious duel in the end
went to Edoardo Mortara, Audi Sport Team Rosberg and Audi with a lead of 0.366
seconds.
“I’m racing on a track like this for the first time,” beamed “Edo” after his victory. “I
already felt comfortable between concrete walls in Macau and at the Norisring. And
the result today was outstanding for me as well.”
As early as at the prologue in the morning the 24-year-old Italian was the front
runner in the Audi squad and had done the fastest run with an advantage of 34
thousandths of a second over Mattias Ekström (Audi Sport Team Abt Sportsline). On
the way to the day’s finale the DTM rookie defeated Rahel Frey, Mattias Ekström and
Mike Rockenfeller. At the first of the two captivating final races of five laps each the
Audi driver still had to admit defeat in a photo finish with 0.011 seconds but clearly
decided the second round in his favor.
“That was a great performance by Edoardo (Mortara) and the Audi squad because
both pit stops worked out perfectly too,” praised Head of Audi Motorsport Dr.
Wolfgang Ullrich. “We’ve seen a really great debut of the DTM in Munich, delivered a
fantastic show to the fans and displayed the power of the Audi A4 DTM to the fans.
We’re already looking forward to tomorrow.”
The result on Saturday also determined the grid positions for Sunday. Edoardo
Mortara’s victory of the day secured the pole position for Audi. Audi’s runner-up on
Saturday was Mike Rockenfeller, Mattias Ekström took third place. The other drivers
who qualified directly for the finale of the top 16 are Oliver Jarvis, Filipe
Albuquerque, Martin Tomczyk and Timo Scheider. Rahel Frey in eighth place and
Miguel Molina, who retired after having contact with the wall in the prologue, will
be fighting for the last remaining grid position in the relegation on Sunday morning
starting at 10 a.m. The finale starts at 12:45 a.m. ARD will begin to broadcast live
from Munich on “Das Erste” at 2 p.m. (local time).
Finale “race of marques”
1 Edoardo Mortara (Playboy Audi A4 DTM) 10 laps in 9m 25.839s
2 Bruno Spengler (Mercedes-Benz) + 0.366s
Audi results, “race of marques”
1 Edoardo Mortara (Playboy Audi A4 DTM)
2 Mike Rockenfeller (E-POSTBRIEF Audi A4 DTM)
3 Mattias Ekström (Red Bull Audi A4 DTM)
4 Oliver Jarvis (Audi performance cars A4 DTM)
5 Filipe Albuquerque (TV Movie Audi A4 DTM)
6 Martin Tomczyk (Schaeffler Audi A4 DTM)
7 Timo Scheider (AUTO TEST Audi A4 DTM)
8 Rahel Frey (Glamour Audi A4 DTM)
9 Miguel Molina (Red Bull Audi A4 DTM)
Audi Motorsport.
Posted by AmigosRacing/MRS GT. at 21:06