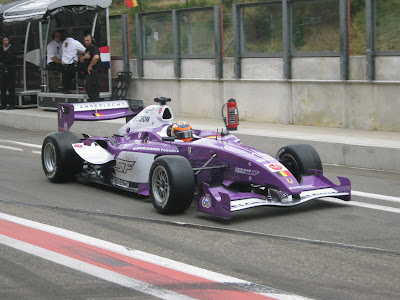 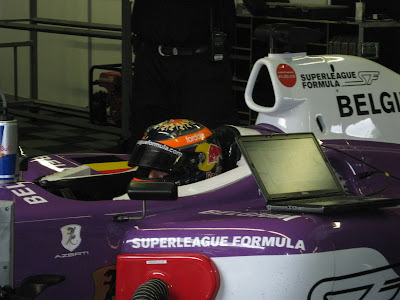 The opening day of Superleague Formula’s trip to Zolder has given the local crowd plenty to cheer about, with the Belgium-RSC Anderlecht car of Neel Jani topping first practice and Belgian-born racer Frederic Vervisch fastest in the second run aboard his Team Luxembourg machine.

Jani produced a lap of 1:20.020 to edge out Craig Dolby (England) and John Martin (Australia) in the closely-fought opening run, a fine start to the 27-year-old’s second weekend of Superleague action.

“So far so good,” reported Jani after the session. “Now we just need to improve a few things on the car and then we´ll see how it goes tomorrow.

“I had two laps within a few tenths of each other, so from that point of view we have consistent pace. It would be nice to have a bigger gap over second position though!”

The Belgian car didn't hit the track until halfway through the 40-minute session, but when it finally emerged Swiss-born racer Jani wasted little time in getting among the pacesetters, leaping to P4 on his first flying lap. He then went to the top of the times with under five minutes remaining, toppling Dolby to end the session a slender 0.161s clear of the England car.

“The session went well,” said Dolby, a self-confessed lover of the Zolder circuit. “We did our thing and we didn’t go out to set fast lap times for the sake of it: we are working on our race pace and running quite heavy on fuel. Looking at the times we are at the sharp end and we were consistent, so I’m positive.”

Martin – who had set the pace for much of the first half of the session - was just 0.018s behind Dolby in third, and he too was pleased with his opening run pace.

“First practice went well,” said the Australian. “We ended up P3, but we were fastest for most of the session. We tried a few different ideas out, so it was a normal practice scenario. I think at this stage we are looking very competitive.”

Dutchman Yelmer Buurman (Netherlands – PSV Eindhoven) was also on the pace throughout opening practice, eventually setting the fourth fastest lap of the session as he bids to add to the opening race win he took on home soil last month. Behind him Assen polesitter Tristan Gommendy (France – Girondins de Bordeaux) was fifth, whilst Andy Soucek (Spain – Atletico de Madrid) delivered a strong final lap to end the session sixth.

“It was good – very good! You can feel that it’s a big car, especially in the slow corners, and it´s definitely fun to drive,” the Russian reported after his first taste of the Superleague Formula racer. “It´s important for me to get used to the push to pass button: I think the other drivers used it to set their best laps, so I need more experience with it.”

Belgian-born Vervisch then set the pace in second practice, recording a blistering lap late in the 40-minute session. The Team Luxembourg racer became the first and only driver to dip into the 1m18s and ended the run almost four-tenths faster than his nearest challenger.

“The car feels better than it did in Assen,” Vervisch said after the session. “I am happy so far, and although practice times don’t mean anything it is nice to end the day in P1.”

Whilst Vervisch may have been clear at the top of the timesheets gap between second and third was far smaller. Having kept their heads down for much of the session both Soucek and Wissel produced brilliant late showings to set identical laps of 1m19.179s. The duo finished second and third respectively, Soucek classified ahead of series returnee Wissel by dint of having set his lap first.

“It’s been a good day, with sixth in the first session and second in practice two,” said a confident Soucek. “We made some improvements on the car throughout, but there’s still some work to be done and tomorrow we should be aiming to qualify in the top three. The team is doing a great job and if we improve the car a little further we can definitely fight for wins here.”

Wissel meanwhile was clearly delighted to be back at the wheel of a Superleague Formula car, and wasted no time getting on the pace in his South Korea entry.

“Today felt good after nine months out of a racing car,” beamed the German. “It was a bit difficult during the first few laps, but by the end of the session we found some good speed. I’m with a new team this weekend, so we worked extremely hard and now we’re just three tenths off the pace. I’m really looking forward to tomorrow.”

Practice one pacesetter Jani ended the session fourth with newboy Aleshin fifth. The Russian’s session had begun in troubled fashion as he spun exiting the final chicane early in the run, stalling in the process and prompting a red flag to be dropped.

But when proceedings resumed Aleshin displayed the pace that took him to last year's Formula Renault 3.5 title, going fastest midway through the session and remaining there until the late flurry dropped him to a still-impressive fifth.

The second run brought less joy for practice one pacesetters Dolby and Martin with the Englishman tenth fastest and Australian racer Martin seventh.

Following practice the drivers drew their groups for tomorrow’s qualifying session. The fastest four from each will progress to the head-to-head knockout quarter-final phase, and with Jani’s Belgium car drawn in Group A and Vervisch’s Luxembourg entry in Group B two clear favourites to emerge can already be picked out.