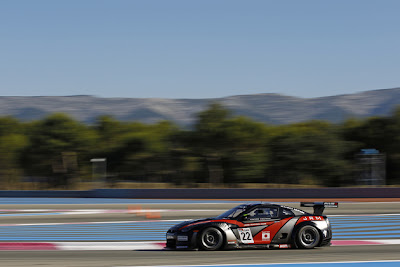 The JR Motorsport Nissan GT-Rs took a 1-2 in qualifying at Paul Ricard for Round 7 of the FIA GT1 World Championship and will start on the front row for this afternoons Qualifying Race. Richard Westbrook scored his second pole position of the 2011 season with a time of 2:03.419 in the nr22 JSM Nissan, just 0.084s ahead of Michael Krumm in the sister nr23 GT-R. Despite a spin early in the final qualifying session Tomas Enge took third place in the nr7 Young Driver AMR Aston Martin DB9 to head Row 2.

The big casualty of the session was the championship leaders Marc Basseng and Markus Winkelhock in the nr38 All-Inkl Munnich Motorsport Lamborghini. The German pair were eliminated in Q2. The sister car, the No.37 of Nicky Pastorelli and Dominik Schwager scraped through in eighth place their eventual finishing position in the Q3 shootout.

The Qualifying Race takes place at 16:15 local time this afternoon

CLICK HERE for Facts from the three qualifying sessions