Porsche Mobil 1 Supercup, round 5 at the Formula 1 race in Silverstone/Großbritannien René Rast takes the points’ lead with third straight win 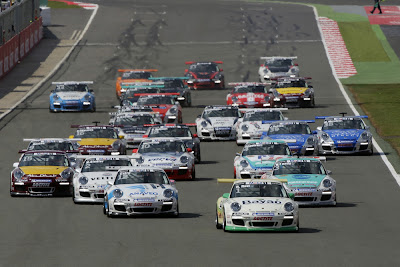 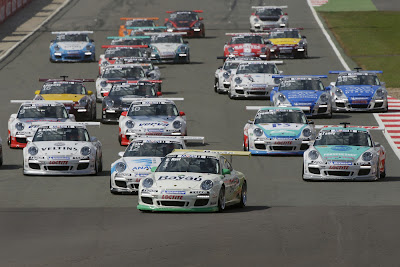 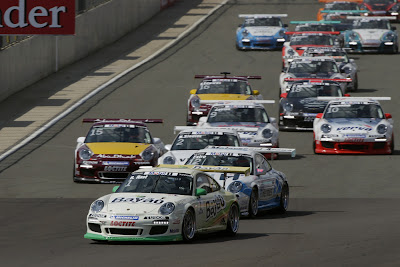 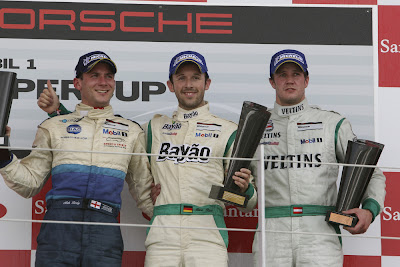 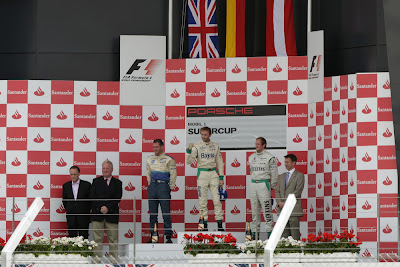 Porsche Mobil 1 Supercup, round 5 at the Formula 1 race in Silverstone/Großbritannien

Stuttgart. A change at the top of the points’ table in the Porsche Mobil 1 Supercup: In Silverstone, Germany’s René Rast celebrated his third win in a row with his Porsche 911 GT3 Cup fielded by VELTINS Lechner Racing to snatch the points’ lead in the world’s fastest international one-make race series. Behind the title defender on the time-honoured circuit, local hero Nick Tandy (Konrad Motorsport) secured second place, with Austria’s Norbert Siedler (VELTINS Lechner Racing) in third.

In Silverstone of all places, René Rast made the most of the moment. After winning in Monaco and on the Nürburgring, he not only fended off his arch rival Nick Tandy, who last year secured his first victory in the Porsche Mobil1 Supercup on his home track. On the demanding Grand Prix circuit, he also profited from Briton Sean Edwards’ unlucky weekend. Driving for the Abu Dhabi by tolimit squad, the Barcelona winner and former points’ leader didn’t quite find his usual speed neither in the partly wet qualifying nor in the race in dry conditions and had to settle for tenth. In the overall classification he ranks second two points ahead of Nick Tandy, who has finished four of the five races to now in second place.

While René Rast again demonstrated his skill with a lights-to-flag win, despite flat-spotting two tyres in the first lap, Kévin Estre narrowly missed out on a big surprise. The Supercup rookie from France took up the race from the second row for Hermes Attempto Racing, and salvaged his fourth place behind the leading trio with a mammoth effort after facing strong opposition from Christian Engelhart (Konrad Motorsport) and Jeroen Bleekemolen (Abu Dhabi by tolimit). This marks his best result in the Porsche Mobil1 Supercup so far. Engelhart, the Istanbul winner from Germany, came fifth, with the double Supercup champion from the Netherlands yielding sixth place. Finishing behind them were Slovakia’s Stefan Rosina and Poland’s Kuba Giermaziak of the VERVA Racing Team in seventh and eighth respectively, with the Supercup record-winner Patrick Huisman (Team Bleekemolen) from the Netherlands finishing in ninth.

René Rast (winner): “That was a tough race. I got away well at the start and was able to pull away a little, but then Nick got faster and faster. In the first lap I flat-spotted both front tyres, and I had to really fight with the car. Luckily I could hold on to my first place to the flag. It was a fantastic weekend for our team.”

Nick Tandy (second): “Obviously it would have been great to win my home race. But second place isn’t bad. I caught up to René quicker than I thought after the start which just goes to show how great our car set-up was. But I was never in a position to really attack. In the last lap I tried again but went sideways a little off the circuit. And that was that. Now we’ll try our luck on the Nürburgring.”

Norbert Siedler (third): “My start was miserable otherwise I could have perhaps put René under pressure. But I think I can be very happy with third place in Silverstone.”

* It has yet to be decided if and when there will be a replacement for the cancelled Formula 1 race in Bahrain with two rounds of the Porsche Mobil1 Supercup.

Round 6 of the Porsche Mobil1 Supercup takes place on 24th July as support to the Formula 1 race on the Nürburgring.