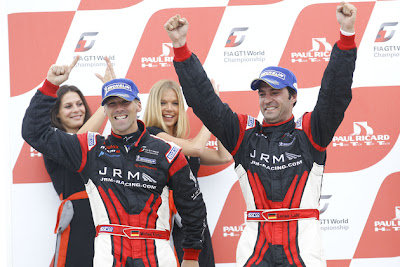 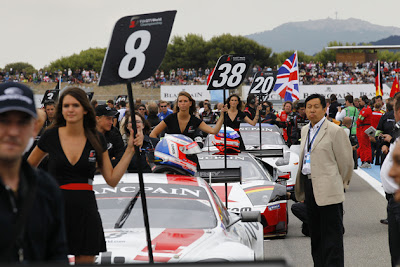 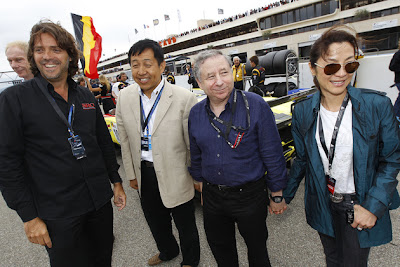 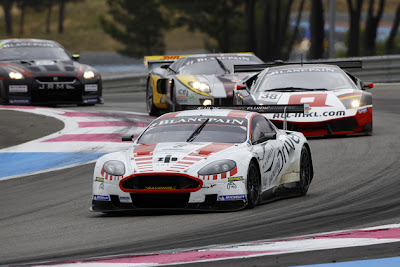 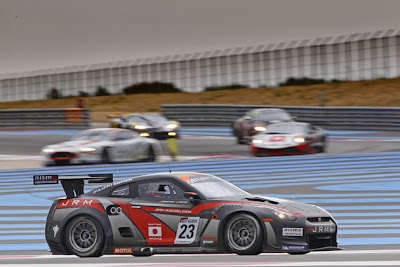 Over 10,000 visitors witnessed a Nissan double victory in the seventh round of the FIA GT1 World Championship at Paul Ricard with the JRM MotorspoPublicar entradarts No.23 GT-R of Michael Krumm and Lucas Luhr taking the win in the Championship Race to add to yesterday's Qualifying Race victory. The German pair were able to control the race from pole, complete a rapid pit stop and take their fourth chequered flag of the season.

In overcast conditions suited to the Aston Martins, the Young Driver cars were second and third. The No.8 of Darren Turner and Stefan Mücke led home the sister car of Tomas Enge and Alex Muller - a reversal of the placings from the Qualifying Race for the Astons. David Brabham and Jamie Campbell-Walter, starting from 11th position, produced a spirited performance to claim fourth place. The Hexis Aston No.4 of Christian Hohenadel and Andrea Piccini took fifth while Maxime Martin and Fred Makowiecki flew the flag for Ford with sixth place in the Marc VDS Ford GT No.41.

The unluckiest of the Nissans was the No.22 JRM car of Peter Dumbreck and Richard Westbrook which limped back to the pits with a suspension problem with five minutes remaining. The British duo were fourth in the Qualifying Race and were threatening a podium position in the main event when fate conspired against them once again.

The All-Inkl.com Münnich Motorsport No.38 of Markus Winkelhock and Marc Basseng was running strongly in the top four, before being handicapped by a slow pit stop and finished eighth.

It was a torrid race for the Corvettes. The Exim Bank Team China No.11 of Mike Hezemans and Andreas Zuber retired on the opening lap after running wide and bounced over the kerb on the exit of turn two and sustaining front tyre and under body damage. It was the second retirement of the weekend for the pair. The DKR No.47 of Michael Rossi and Dimitri Enjalbert made a solid start from the seventh row on the grid but eventually finished 10th.

The result puts a completely different complexion on the drivers' standings. Krumm and Luhr take over at the top with 111 points. Basseng and Winkelhock, the leaders prior to the Paul Ricard weekend, drop to second on 97 while Hohenadel and Piccini remain third on 84.JRM (166) also closed the gap on All-Inkl.com Münnich Motorsport (169) in the teams' championship. Young Driver moved to third on 159.

The next round of the 2011 FIA GT1 World Championship takes place in China at the Ordos circuit in Inner Mongolia on 2-4 September.

“I got a good getaway. The most thing was to get through the first corner without an accident which we did. Tomas (Enge) gave me a very hard time during the first few laps which I expected. It took a while to get the tyre pressures up but after about three laps or four I found the grip and I was able to get a little bit of a gap. I had to fight quite hard for every centimetre on the road. I wanted to make as big a gap as I could for the driver change in case anything went wrong. The car was fantastic. It was a perfect weekend.”

“I saw during the tyre change we had a small problem with the wheel nut on the right rear. When I left the pits I had quite a good gap but Darren (Turner) pushed quite hard on his out lap and I saw him coming and coming and I thought ‘this is going to be close’. But after a few laps the tyre pressure came up and then I could control the pace. I didn’t want to risk too much with the tyres. I didn’t overstretch. Two wins is a great feeling.”

“I knew that our car would be quite good in the conditions. I just tried to stay clear of any drama at the start and save the tyres as much as I could. I had a clean stint. We decided to make an early pit stop which was the right decision and the boys did a great job to get us into second place.”

“We were able to jump the No.7 car at the pit stop and we had some good tyres for the second half of the race which helped. I pushed really hard on the out lap. I wasn’t really expecting to be so close to the No.23 car. I smelled a bit of blood and pushed a bit harder and tried to put him (Lucas Luhr) under pressure but it looked like he found another gear and was able to pull away and maintain the pace. With a few laps to go a noise came in the car which I was a bit worried about. Towards the end of the race we were closing the gap but I don’t really think we had a chance to try a move. I’m really pleased to have both Young Driver cars on the podium. It’s nice to have a decent weekend.”

“Stefan (Mücke) gave me a really hard time especially at the end of the first stint. At the start of the race I was pushing too much and damaged the tyres. For the last three laps of the stint I was just hanging in there. I was radioing that I couldn’t do any more laps otherwise I was going to be overtaken by everybody. The driver change didn’t go in our favour. We had a really good car yesterday – really good balance. Today we were struggling a bit with the rear tyres. We are really happy to finish on the podium and collect some points. It was a great battle to watch at the end with Alex trying to maintain the gap to the cars behind.”

“The pit crew from car 8 was a bit faster than ours today that’s why we dropped back. The track conditions changed slightly towards the end – not in our direction so we were struggling with the set-up with oversteering at the end of the race. I just tried to defend my position and bring the third place home for the team. Yesterday we were 2 and 3, today we are 2 and 3, we just swapped positions. We scored points, we have not too much weight ballast for the next race so we are looking forward to China."

“The team worked hard over the weekend and we started well for the Championship Race from fourth position on the grid. However, the race was very frustrating because we just had no power to keep the others behind us. Our engines were delivered late before this weekend which didn’t help with our preparations. It’s very disappointing and frustrating.”

“The start was a big messy really and I got caught between some cars. A Corvette hit me from the side and then I hit the other one in front of me. Luckily I managed to get through and I think I came out in around 10th position. Peter Dumbreck was in front of me and I was chasing him hard. It was a good race and our pace was OK but we dropped off a little bit towards the end of the stint. The pit stop was fine and Enrique’s pace was really good in the second stint so I think there was potential to finish a bit higher but I’m happy with the result.”

“I suppose the race went OK for us but we just didn’t have any pace. We improved the car a little bit over the weekend but even so I was very surprised that we were able to keep the other cars behind us. We definitely didn’t have the pace to fight at the front this weekend but we were able to score some points which are important for our championship position. Overall, it was a very difficult weekend for us, especially coming from the back, so we are looking to do better at the next race.”

“It was a standard race for us today and we were unlucky to get some contact at the start which was frustrating. This incident set us up for a disappointing race ahead really. Therefore all we could do was see how fast the car is and keep a consistent pace to the end of the race.”

“Unfortunately my race was a very quick one today. We had quite a good start but when I turned in to turn one I think it was Nicky Catsburg in the Nissan who hit me from the back and I understeered straight off the track. But I was over the line at the start so I probably would have been given a penalty anyway. There was some obvious damage to the car so I just had to stop and retire. It’s a big shame.”