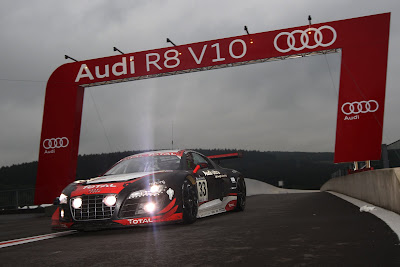 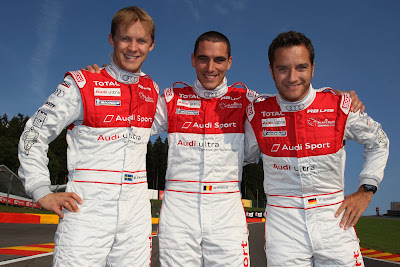 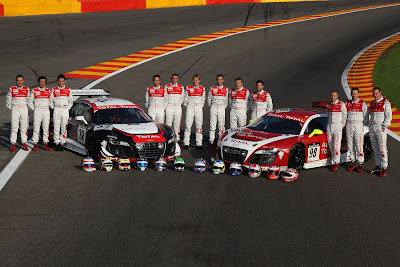 Audi R8 LMS wins the most important
endurance race for GT cars.
􀀁 Audi Sport Team WRT triumphant at the 24 Hours Spa
􀀁 Victorious against GT cars from twelve other manufacturers
􀀁 DTM stars Ekström and Scheider in winning car
Ingolstadt/Spa, July 31, 2011 – The Audi R8 LMS won the most important
endurance race for GT cars ahead of BMW and Mercedes-Benz. Audi Sport Team
WRT overcame the strongest competition during the 63rd running of the 24
hours of Spa (Belgium). The two DTM stars Mattias Ekström (Sweden) and Timo
Scheider (Germany) and the Belgian endurance specialist Greg Franchi shared
driving duties in the victorious mid-engine sportscar.
Experts agreed before the race started that the endurance classic, held since 1924,
had never fielded so many potential winners as this year. A total of 62 cars
representing 13 different manufacturers joined the grid, including no less than 57
cars of the worldwide booming GT3 category.
The opening stages of the endurance classic in particular fulfilled expectations.
Spectators lining the 7.004 kilometer track and in front of television screens
enjoyed tough battles for position, countless overtaking maneuvers, retirements
and small and big dramas which are typical for a 24-hour race. The Audi R8 LMS was
the fastest car in the field from the very beginning. After just a few hours it was
clear that the V10 powered R8 sports cars where the favorites for the victory.
The race of the victorious #33 R8 LMS fielded by Audi Sport Team WRT was
particularly impressive. The car driven by Mattias Ekström, Greg Franchi and Timo
Scheider ran like clockwork for 24 hours, while many other GT3 cars were no match
for the stresses and strains of the hard fought endurance race. The brake discs and
pads were changed twice as scheduled. Apart from this, the R8 LMS only entered pit
lane to refuel, change tires and to swap drivers. At the start of the tenth hour
Ekström/Franchi/Scheider took the lead which they duly held all the way to the
checkered flag. At the finish the trio had a two-lap lead over the closest rival.
Audi led 22 of the 24 hours. Just after midnight three R8 LMS actually occupied the
first three positions. However, while Audi Sport Team WRT also celebrated fourth
overall for the #32 car, Audi Sport Team Phoenix was struck by bad luck.
Marc Basseng, Christopher Haase and Frank Stippler led convincingly for many hours
in the #99 R8 LMS and had eked out an advantage of almost an entire lap. Just after
1 a.m. Haase lost first place due to a faulty air jack system. Only an hour later the
youngster slid off the track on a damp patch at Turn 9 and had to retire the car.
The #98 sister car was hit by a slower car on the left rear wheel while fighting for
the lead towards the end of the third hour. Shortly afterwards second gear was lost.
Although they had to continue without second gear as a result and lost additional
time due to a puncture, Marcel Fässler, Andrea Piccini and Mike Rockenfeller worked
their way back up to third from 13th before a gearbox change was required just
after midnight. The change cost 1 hour 36 minutes. The trio still managed to battle
their way through the field from 36th to 14th thanks to consistently quick laps and
in the process recorded the absolute fastest race lap (Mike Rockenfeller / 2m
20.286s).
The second Audi R8 LMS entered by Audi Sport Team WRT put in two exciting
comeback drives. After an accident in qualifying, Stéphane Ortelli scythed
spectacularly through the field from 41st to second in the opening 90 minutes,
before a drive-through-penalty for contact cost almost a lap. Changing the front left
suspension components took 24 minutes and threw the #32 car back to a seemingly
hopeless 42nd position. However, Filipe Albuquerque, Bert Longin and Stéphane
Ortelli had other ideas, overtook car after car and finished the race in an almost
sensational fourth overall. This was the icing on the cake for Audi Sport Team WRT
which celebrated an important victory in its first outing as “factory” team for Audi.
“Vincent Vosse’s team really did a fantastic job during its home race,” explained
Head of Audi Motorsport Dr. Wolfgang Ullrich. “Mattias (Ekström), Greg (Franchi)
and Timo (Scheider) drove fast and without mistakes – and it was exactly this that
was the key to victory this weekend alongside the reliability and speed of the R8
LMS. Unfortunately out other three cars were rather unlucky and especially Ernst
Moser’s squad. That’s why it was almost like Le Mans at the end: After just a few
hours we only had one iron still in the fire – but we won with this car. This shows our
strong nerves and team spirit because everybody helped to take the win with the
only remaining car.”
The Audi R8 LMS, which is supplied to customers by Audi Sport customer racing
since last year, notched up win number 96 this weekend. “After three class victories
in the 24-hour race at the Nürburgring and the one-two in the 12-hour race at
Bathurst at the start of the year, this is without doubt the most important victory
for the Audi R8 LMS and our still relatively young customer racing program,” said
Werner Frowein who is responsible for the company’s customer racing program as
Managing Director of quattro GmbH. “I’d like to thank everybody who worked so
hard and with so much commitment to make this victory possible. After Le Mans,
Audi now stands in the winners list of another great 24-hour race. We were able to
show that the R8 is a fantastic sportscar. Our increasing number of customer teams
also confirms this.”
One of these customer teams, United Autosports, contested the 24 hours Spa with
three R8 LMS. Following an eventful race with drivers Richard Dean, Zak Brown,
Stefan Johansson and Johnny Herbert can be delighted with 13th overall and sixth
place in the Pro-Am category.
Audi Sport.
Posted by AmigosRacing/MRS GT. at 20:20