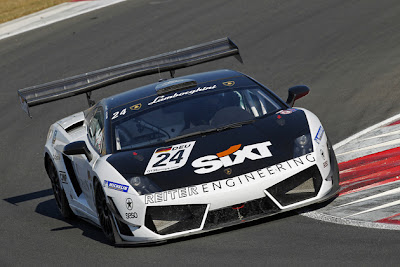 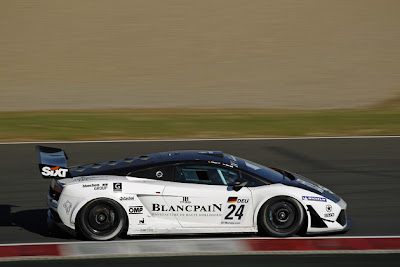 While the All-Inkl Lamborghini was the quickest in both GT1 sessions it was the Reiter Engineering Lamborghini Gallardo of Nikolaus Meyr-Melnhof and Albert von Thurn und Taxis which set the fastest GT3 time on the first day of the FIA GT3 European Championship weekend at Navarra in Spain.

Dino Lunardi put the nr15 Sainteloc Audi R8 LMS at the top of the time sheets in the first Free Practice session of the FIA GT3 European Championship event at Navarra in Spain. The French driver posted a 1m41.224 lap right at the end of the 60-minute session, which was interrupted by a red flag when the nr8 LMP Motorsport Aston Martin went off and got stuck in the gravel. The session restarted and it was Championship leader Francesco Castellacci in the nr50 AF Corse Ferrari 458 Italia who set the pace. At the end of Free Practice the Ferrari was just 0.039s behind the lead Audi. The nr3 Graff Racing Mercedes-Benz SLS AMG of Mike Parisy was 3rd fastest, 0.439s behind the lead car and 0.055s ahead of the nr6 Need for Speed Team Schubert BMW in 4th.

It was Nikolaus Meyr-Melnhof in the Reiter Lamborghini who set the fastest lap of 1m40.372, 0.145s ahead of the nr50 AF Corse Ferrari 458 Italia of Francesco Castellacci and Federico Leo. The nr3 Graff Racing Merecedes-Benz SLS AMG of Mike Parisy and Philippe Giauque was once again third fastest in the second session, 0.251s behind the leading Lamborghini. The nr15 Sainteloc Audi of Jerome Demay and Dino Lunardi, which was fastest in the earlier Free Practice session was 4th fastest in Free Practice 2, 0.354 adrift of the leading car.