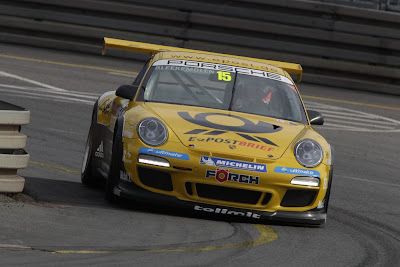 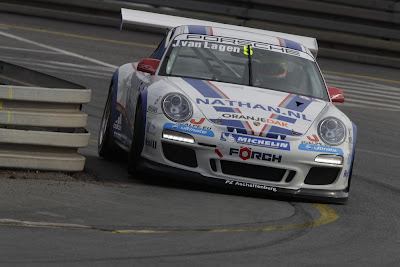 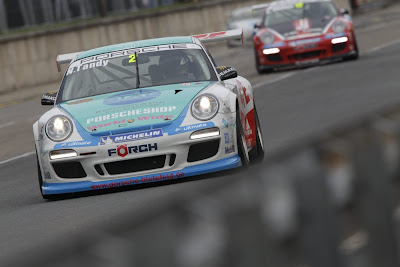 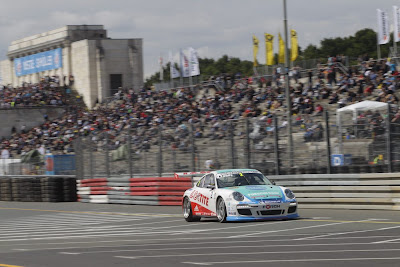 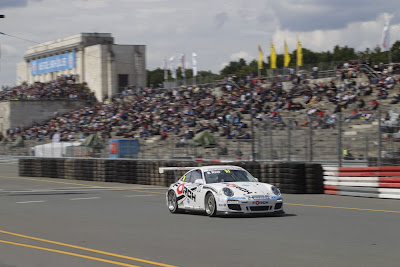 Stuttgart. It doesn´t get much closer than this: With a mere 0.003-second advantage, Nick Tandy snatched his first pole position this season by a hair´s breadth. The Briton driving for Konrad Motorsport lapped the 2.3 kilometre Norisring in 51.682 seconds and with this set a new record on the street circuit in the Porsche 911 GT3 Cup. Tandy is the sixth different pole-sitter at the sixth race of the 2011 Porsche Carrera Cup Deutschland.

During the ten-minute final qualifying session to determine the top ten, the fastest times changed by the second on the shortest circuit on the race calendar. At the end, the six quickest drivers were separated by an incredible 0.021 seconds. The second grid spot at the qualifying thriller is occupied by Martin Ragginger. For the Austrian competing for the Schnabl Engineering team, this marks his best qualifying result so far this season. Jan Seyffarth also sees a light at the end of the tunnel with the third grid position. Driving for SMS Seyffarth Motorsport, the German was only 0.008 seconds adrift of the pole-setting time. After a rather mixed start to the season, the 2008 vice-champion only ranks eighth overall at the half-way point in the series.

René Rast (Germany) takes up tomorrow´s 35-lap sprint (start 15.10 hours) around the stone grandstands and along the Dutzendteich from the fourth grid spot. At one point the outstanding winner of the Porsche Carrera Cup on the Nürburgring also managed to clock the fastest time in his Förch Racing 911, but was unable to defend it. The same for Sean Edwards. Driving for the Deutsche Post by tolimit squad, the Briton tackles the Norisring race from fifth place. Recently Edwards shunted the former leader Nick Tandy from the top of the points´ table with his fourth place at the World Cup and now also leads the Porsche Mobil1 Supercup. Whilst he has already secured one pole position and a race win in the Supercup this year, he has not yet managed this in Germany´s fastest one-make series.

TV station Sport1 broadcasts the Norisring race from 15.10 hours live and televises race highlights, interviews and reports in the Carrera Cup Magazin on the 8th July from 23.30 hours until midnight. Moreover, the street race is broadcast on the official website of the Porsche Carrera Cup Deutschland on www.porsche.de/carreracup. A one-hour report on the Porsche Carrera World Cup, the greatest Porsche race in history on the Nürburgring, is televised by Sport1 this coming Monday, 4th July, at 17.30 hours.

Nick Tandy (pole-sitter): “The lap times are so close this year that it´s just crazy. At last I managed my first pole position of 2011 at the sixth race weekend. I can´t say how happy I am about this, especially after the huge disappointment of my retirement at the World Cup.”

Martin Ragginger (second in qualifying): “We knew from last year that our car is well set-up for the Norisring, because we are very good under braking. And you need that here where you have to decelerate drastically for the hairpins twice per lap. For sure lady luck was with us today. The times are so tight that you can´t talk about skill alone, you have to have luck on your side as well.”

Jan Seyffarth (third in qualifying): “That was my best qualifying result this season. For this reason I´m pleased with third on the grid, but at the same time I´m a little disappointed. Towards the end of the qualifying I was the quickest in the first sector, then I drove my personal best in the second sector but I messed up the third. If you look at the gaps I can only say we´ve never seen it so close. The people can look forward to an incredibly exciting race tomorrow.”