DTM: Quotes after the race of marques in Munich 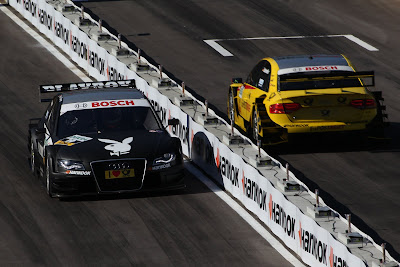 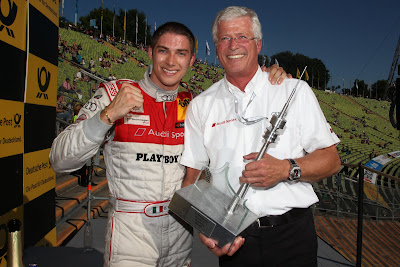 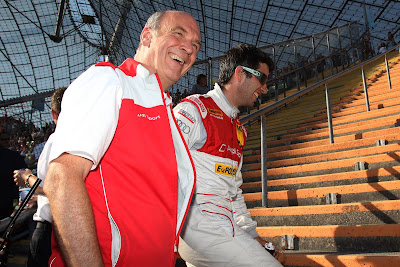 Quotes after the race of marques in Munich
Ingolstadt/Munich, July 16, 2011 – Edoardo Mortara won the “race of marques”
at the DTM Show Event in Munich on Saturday for Audi. Quotes of the day from
the Audi camp.
Dr. Wolfgang Ullrich (Head of Audi Motorsport)
“A nice success for the team and for Edo (Mortara). They’ve done a good job. It was
very, very close. But in the end Edoardo prevailed by a very narrow margin – also
thanks to the team and the great pit stops. We all know that the competition here is
extremely close. The eleven thousandths at the penultimate race showed how tight
it is. But Edoardo continuously worked out a small advantage at the last run, which
made the difference.”
Edoardo Mortara (Playboy Audi A4 DTM), 1st place
“A fantastic day! We were super fast today. Everyone showed a great performance.
Even though there are no championship points awarded for this I’m very happy
about my first victory in the DTM. But I’m even happier for my guys and the Rosberg
team. The finale was great. Bruno (Spengler) was very fast and the gaps were close.”
Mike Rockenfeller (E-POSTBRIEF Audi A4 DTM), 2nd place
“I was in the Audi-internal finale but I’d have liked making it into the finale.
However, my goal today was not to damage the car after I’ve already had my
moment with the wall on Friday. The starting base for Sunday is pretty good.”
Mattias Ekström (Red Bull Audi A4 DTM), 3rd place
“I had a short day. I drove a race against Timo (Scheider) and one against Edoardo
(Mortara). Unfortunately, I made a mistake and got into oversteer once. I had a pit
stop that was just medium. After that, it was over for me early.”
Oliver Jarvis (Audi Sport performance cars A4 DTM), 4th place
“I had a small problem with the brakes, so I was careful with the concrete walls on
both sides. I could have probably been faster. Mike (Rockenfeller) was a bit quicker,
it was a fair result.”
Filipe Albuquerque (TV Movie Audi A4 DTM), 5th place
“It was frustrating because I made a mistake with the pit limiter at the start and
immediately lost one and a half seconds on the first lap, I made up some time but it
wasn’t enough. In the end we were lacking half a second to Rocky. But tomorrow is a
new day.”
Martin Tomczyk (Schaeffler Audi A4 DTM), 6th place
“Saturday was short for me. I had a great battle with Oliver Jarvis; it was probably
the closest decision of the day. We delivered a great show to the spectators. I’m not
disappointed but chilled out in the afternoon watching the final rounds.”
Timo Scheider (AUTO TEST Audi A4 DTM), 7th place
“Unfortunately I didn’t get to drive much. It was really good fun even though my car
wasn’t so exciting. It’s hard finding an optimal set-up here because you only drive a
few laps and it’s not easy to find the right temperature window for the tires and the
brakes.”
Rahel Frey (Glamour Audi A4 DTM), 8th place
“It’s a huge spectacle for the crowed. The response is positive. For the drivers it’s a
big challenge because the track is very narrow and the grip level changes from
session to session. The track allows no mistakes. It’s already a success getting car
across the laps unharmed.”
Miguel Molina (Red Bull Audi A4 DTM), 9th place
“A great show event in Munich! The ITR and the manufacturers have done a very
good job to make this possible for us. That’s nice for the audience! For me, Saturday
was not so nice. I made a mistake in the prologue. That meant I was eliminated.
Still, I enjoyed the show afterwards and tried to support my team-mates.”
Hans-Jürgen Abt (Teamchef Audi Sport Team Abt Sportsline): “Edoardo (Mortara)
drove a superb race. We also helped at the first pit stop. The Abt team had a part in
putting him into the right position. He drove sensationally. For the fans it was really
thrilling. This race is new in the DTM. In the future we’ll do a bit better in
positioning ourselves but the direction is right. People are enjoying it. You can tell
that. I’m eager to see what’ll happen on the day of the finale.”
Ernst Moser (Teamchef Audi Sport Team Phoenix): “Well done to the organizers for
a putting on an event that’s running smoothly. The spectators are getting to see a
great show. We were narrowly beaten with both cars. Martin (Tomczyk) no doubt
3/3
didn’t take a one hundred percent risk in his drive in order to keep his car intact.
Rahel (Frey) had a tough rival in Edoardo Mortara. Her lap times were really good;
she wasn’t the last one but kept a few drivers behind her. Well done to her.”
Arno Zensen (Teamchef Audi Sport Team Rosberg): “It was an emotional roller
coaster. The finale was incredible. We knew that Edo (Mortara) is fast. We still tried
to slow him down a little this morning so he wouldn’t break anything. At the finale
he really revved up. A big thank you to the squad – and also to Abt and Phoenix, who
participated in the great pit stops.”
Audi Motorsport.
Posted by AmigosRacing/MRS GT. at 02:18