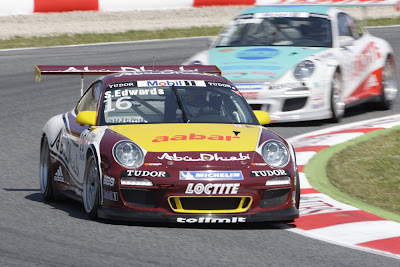 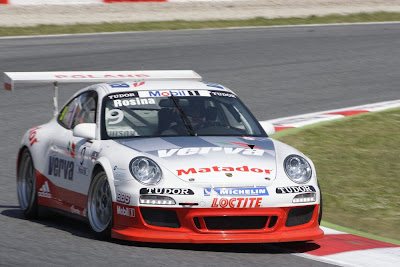 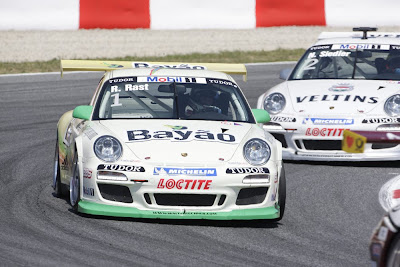 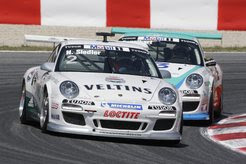 Porsche Mobil 1 Supercup, round 5 at the Formula 1 race in Silverstone/Great Britain

Stuttgart. The name alone is pure fascination: Silverstone. Nick Tandy’s eyes light up when he talks about the storied circuit. “For a race driver this track is something very special, like Wimbledon is for a tennis player,” he says. “As a child I dreamed of driving in Silverstone at some stage in my life – and to win.”

And this dream has come true. With the Porsche 911 GT3 Cup fielded by Konrad Motorsport, he celebrated his first ever win in the Porsche Mobil1 Supercup of all places in Silverstone. And of course he is determined to follow this up with another one on 10 July – especially after slipping from the points’ table at the Porsche Carrera World Cup recently on the Nürburgring-Nordschleife. While in hot pursuit of the leader he skidded from the track in torrential rain, hit the crash barriers and retired.

Profiting the most from his misfortune, however, was his compatriot Sean Edwards. The Abu Dhabi by tolimit team pilot and Barcelona winner moved to the top of the points and now aims to defend this position at his home race. René Rast, however, is keen to foil this plan. It took the reigning champion two races to get into the swing of the season – but his wins in Monaco and at the Porsche Carrera World Cup has restored his old self-confidence. “I won two races in a row in Monaco and on the Nordschleife. To win on such a traditional circuit like Silverstone would fit perfectly into this pattern,” says the German. With his brilliant performance at the Nürburgring, the VELTINS Lechner Racing pilot finally rejoined the fight for the title and now ranks in second place just five points shy of the leader. The slow start to his season is history. “We had a couple of hiccups at the beginning of the year, but now we’re back in force.”

The most successful Supercup driver in Silverstone is Patrick Huisman. Competing for Team Bleekemolen, the Dutchman has finished first here four times. Ranking third overall, it’s no wonder that he is very much looking forward to travelling to the British Isles to race. “Silverstone is a fantastic race track with a great tradition. You sense this everywhere,” he says. Stefan Rosina is another who shares the enthusiasm of the seasoned campaigner. The Slovakian, who competes for VERVA Racing, has a very special relationship with Silverstone after studying at nearby Oxford. “For me it’s a home race,” he says, raving about the famous corners of Copse, Stowe and Brooklands. Even though the circuit has undergone modifications over the last years, the Silverstone magic has not diminished.

In the bid for the Porsche Mobil1 Supercup title, no driver has managed to build up a clear advantage during the first half of the season. This gives Jeroen Bleekemolen from the Netherlands hopes to secure his third championship title: “We’re a strong team,” says the teammate of points’ leader Sean Edwards at Team Abu Dhabi by tolimit. “This makes us drivers stronger. I’m not about to give up that easily.”

The race in Silverstone on 10th July will be broadcasted live on TV stations Eurosport 2 (11.45 hrs) and Sky (11.40 hrs). Moreover, Eurosport televises highlights of the race at 20.45 hours in its “Motorsport Weekend Magazin” programme.


Points’ standings after 4 of 9 races*

* It has not yet been decided if and when the cancelled Porsche Mobil1 Supercup double-header in Bahrain will be followed up with a replacement.