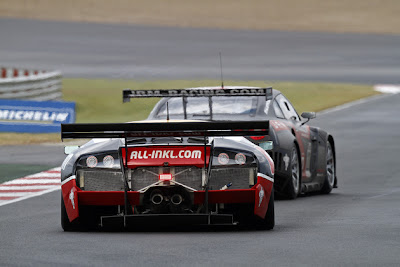 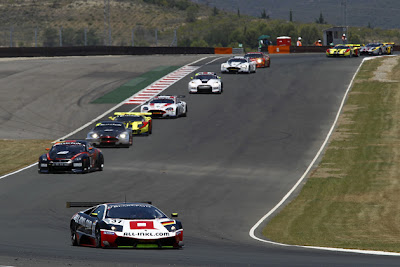 The All-Inkl.com Münnich Motorsport Team completed the domination of the Navarra weekend with another 1-2 in the Championship Race for Round 6 of the FIA GT1 World Championship. This time it was the nr37 pairing of Nicky Pastorelli and Dominik Schwäger who stepped onto the top step of the podium for the first time. Starting from 7th on the grid Schwäger moved up to 4th by the pitstops and the All-Inkl mechanics turned the car round to get it out ahead of the two Nissans and into second place.

The nr38 pairing of Markus Winkelhock and Marc Basseng were well on their way to their 4th win of the season when Basseng had to serve a drive through penalty for driving away after the pitstop while one of his mechanics was still in the working lane. This dropped the nr38 car into second place where it stayed until the chequered flag.

The All-Inkl.com Münnich Motorsport Lamborghini's posted the fastest time in Free Practice and Pre-Qualifying, claimed a both places on the front row in qualifying, set the fastest lap in both races (Dominik Schwäger in the Qualifying Race and Nicky Pastorelli in the Championship Race) and took 1st and 2nd in both races, giving the team a clean sweep during the weekend at Navarra. The points gained this weekend give Markus Winkelhock and Marc Basseng a 15-point advantage over Michael Krumm and Lucas Luhr in the Driver's Championship and the All Inkl.com Münnich Motorsport team a 20-point advantage over Hexis AMR in the Team's Championship.

CLICK HERE for the provisional result of the Championship Race

“I had a pretty good start and made up a few positions. I could have taken a few more risks and move up but I decided to take it easy. It took me a while to pass the Corvette (DKR No.47). We had a few problems with the temperatures so I had to back off a little. I pitted as early as possible. I didn’t expect the development at the end. Our team-mates were unlucky but we have also been unlucky in the past and finished with zero points. It feels great to be on the top step of the podium. It has been a long time coming for us.”

“I hope this will not be the last win for the season. Yesterday we had some problem with the pit stop but today it went really well so the team did a good job. It’s a great result for the team championship. We are on top in the points again and I’m looking forward to the rest of the season.”

“I wasn’t sure what the drive-through penalty was for but obviously it was for the release. As the car went down I pushed the start button and it turned out it was a bit too early. That’s racing and these things happen. In the end a one-two for the team is the maximum I can expect as a team manager. When we had the chance on this track to show our potential with the car and get maximum points we did it so I'm pleased.”

“The car was the best we have had it all weekend. We made a couple of changes after yesterday’s Qualifying Race mostly to tyre pressures. This track is all about traction and we managed to get it so the traction was good. We came into the pit stop second and went out in third place. It was unfortunate to lose a place in the pits. Our crew have been doing a fantastic job all year and been getting better and better. For instance in yesterday’s race we came in in 10th place and went out sixth, a gain of four places. Today we did the best we could for third place.”

“Jamie did a great job to put us into a good position in the first stint. I just tried to keep a good pace and tried not to destroy the tyres. I was settling for third place unless something happened in front. Both the Lamborghinis went well and congratulations to them.”

“We made a good start but we had a problem with the engine which was the main issue for us today. We were lacking power which meant that we struggled to catch and pass people, especially the Nissan’s ahead of us. I think without this issue then we would have been on the podium. It is a shame but overall we had some good pace this weekend. The team also did a great job this weekend, especially during the pit stops.”

“The start of the race was a mess to be honest because once the first row braked for turn one it had a negative effect on the rest of the field. I think our lap times were pretty reasonable and I was pushing the cars in front of me very hard throughout my entire stint. Overall it was a very frustrating race because we worked hard but not a lot came out of it but at least we scored some points for the championship.”

“I am very happy with my second race in GT1 because we scored our first points of the season. The team did a great job this weekend and the car handled very well around this track. We had some good battles out on track which was good to drive and overall I’m very pleased with how the weekend went.”

“I started really well and gained a few positions early on. I was able to maintain a decent pace and hold the Lamborghini behind me, considering their fast pace this weekend. The pit stop could have been better because the two cars coming in together slowed us up a bit. We then got jumped by the Lamborghini but they were much quicker than anybody else throughout the weekend. I was quite happy with fourth position but then we got given a penalty for car release in the pit lane. At very worst it was marginal and to be given a penalty for that is pretty galling, considering the amount of crashing and banging from other drivers. It ruined our weekend.”