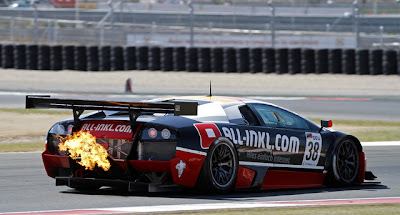 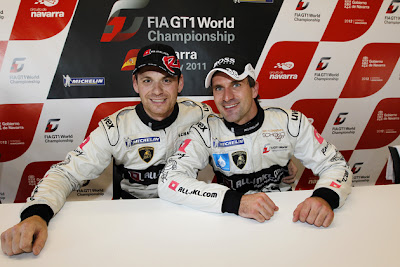 The two All-Inkl.com Münnich Motorsport Lamborghinis continued where they left off on Day One and claimed the front row of the grid as their own for this afternoon's Qualifying Race. In the final session of the qualifying period it looked as if the nr37 Lamborghini of Dominik Schwäger and Nicky Pastorelli, which had been fastest in Q1 and Q2, was going to be on Pole for the fourth time in 2011. However as the chequered flag came out Markus Winkelhock crossed the line in a time of 1:36.579, just 0.004s faster than his teammate to claim the first pole position of the season for the nr38 car.

The nr11 Exim Bank Team China Corvette of Mike Hezemans and Nico Verdonck was the quickest of the non Lamborghini teams, finishing the final session 0.529s behind the pole position holder but 0.2s ahead of Championship leaders Michael Krumm and Lucas Luhr in the nr23 JR Motorsports Nissan GT-R.

The Qualifying Race for Round 6 of the 2011 FIA GT1 World Championship in Navarra will take place this afternoon and is due to start at 16:45 (CET).

CLICK HERE for the Facts from the Qualifying Sessions