FIA GT3: Ferrari and BMW on Pole in Spain 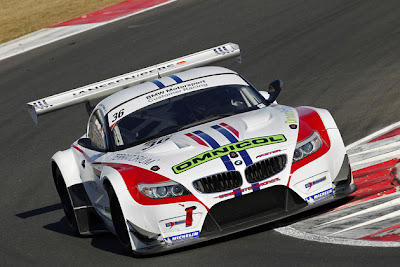 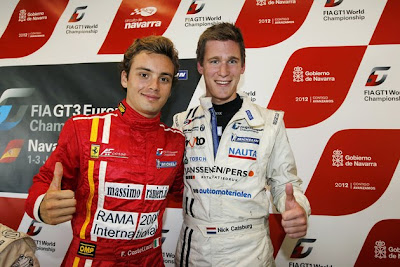 Ferrari and BMW on Pole in Spain

Qualifying for rounds 5 and 6 of the 2011 FIA GT3 European Championship took place at Navarra in Spain and ended with pole positions for the nr50 AF Corse Ferrari 458 Italia of Francesco Castellacci and the nr36 Faster Racing by DB Motorsport BMW Z4 of Nick Catsburg - the second time both drivers have claimed pole position this season.

In qualifying for Round 5 it was a late run by the nr50 Ferrari that claimed pole, beating the nr24 Reiter Engineering Lamborghini Gallardo of Nikolaus Mayr-Melnhof by 0.143s to the top spot. Edward Sandstroem in the nr6 Need for Speed Team Schubert BMW Z4 put in a last lap flyer and pushed Hoevert Vos in the nr35 Faster Racing by DB Motorsport BMW down to 4th place by just 0.026s.

In the Round 6 qualifying session it was a Faster Racing DB Motorsport front row lockout as Nick Catsburg in the nr36 BMW and Jeroen den Boer in the nr35 BMW vied for the top spot, with Catsburg posting a time of 1:38.934, just 0.085s ahead of his teammate. Dino Lunardi in the nr15 Sainteloc Racing Audi R8 LMS made a late bid for pole and managed to secure third on the grid but missing out on the top spot by just 0.1s

Francesco Castellacci: “It’s the best place to start, as with every circuit, but especially here, as it is a tight circuit, it’s very technical. I like it a lot, it’s my first time here. I think our car is very good on this circuit, so I will try my best to keep my position and to give it to Federico. The Ferrari already won here with Vita4one in Blancpain, so I think it’s quite a good track for Ferrari. It’s a mix of fast corners and 2nd gear corners and 3rd gear corners; I like it a lot and I think we’ll have a good race. I also want to thank the team for giving us a good car.”

Nikolaus Mayr-Melnhof: “I’m very happy to be here. We’re finally made it to the front row. We were really struggling at the beginning of the season and we’ve been unlucky, and finally we’re here and really motivated. Thank you to the team for giving a really good car here for us. Maybe benefitting from the fact that we’ve raced here in the Blancpain Series, so we knew the track a little bit and could take some advantage from the setup, so I think that’s perhaps why we were able to go so fast today. It’s a long race, 1 hour, and I hope that we keep everything tidy and don’t make any mistakes, and I think we can hopefully have a good result. After the results from free practice and prequalifying in GT1 as well, you can tell it’s a good Lamborghini track, and they won last year, so we were really confident coming here.”

Edward Sandstroem: “I was struggling a bit early on in qualifying, so it was good to get a clear lap and managed, maybe not a perfect lap, but it was quite close. It’s a good track for the BMWs as well. We are hoping that the tyres are going to last in the long term. We’ll see if we have the benefit when we start, as it’s a bit warmer here, which is something we hope for. The team has done a very good job. We were doing the 24 hours at the Nurburgring the last weekend, and crashed 2 cars really heavily, and were running 2nd when it happened, so that was a big disappointment, but now we have a spare car, and they’ve worked day and night on it, so it’s good to achieve something for the team.”

Nicky Catsburg: “It’s a really good result for my team, seeing as how my team mate is on P2. It was really tough and difficult to get a pole position, as we had some extra weight, but we managed to do it, and I’m really happy with that. We’re going to give our team mates some payback this race, after the last round.”

Jeroen den Boer: “It was nice to see that we were so close to Nicky, as it’s really hard to get a good lap time here with the high temperatures, and we’re struggling a bit with the Michelin tyres in our car. The drop off is very big at high temperatures. I’m happy to be in front, because we need it for the races. It’s always good to know the track, as you get more track time, and that really helps.”

Dino Lunardi: “it was a good session and I’m very happy for Audi, because the beginning of the season was not very good for us. The gap to the 3rd place is very close, so I think the race will be very interesting. When I saw the lap time in the first qualifying, I think that it’s impossible to fight for victory in this condition, so it’s a good result. We’re keeping that. I’m very happy.”