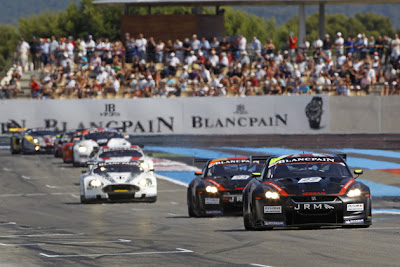 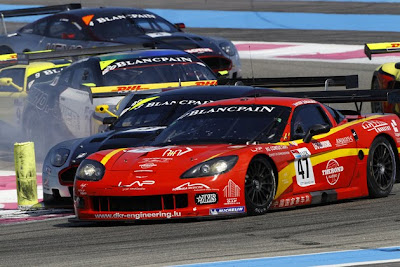 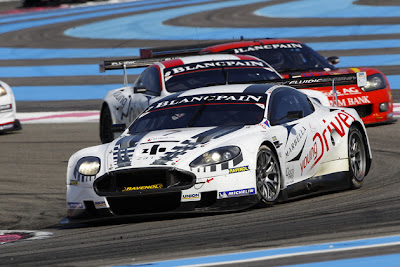 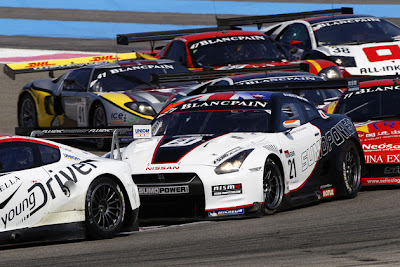 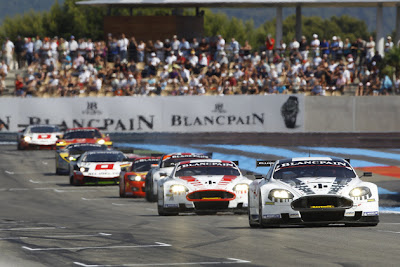 Michael Krumm and Lucas Luhr in the JRM Nissan GT-R No.23 won the Qualifying Race at a scorching hot Paul Ricard. The German pair led home Tomas Enge and Alex Muller in the Young Driver Aston Martin No.7 with Enge pulling off an audacious last-lap move on the pole-sitting No.22 JRM car of British duo Richard Westbrook and Peter Dumbreck. The Young Driver Aston Martin No.8 of Darren Turner and Stefan Mucke was third as Mucke also got passed Westbrook at the wheel of the No.22 Nissan GT-R to take the final place on the podium.

In temperatures above 30C in the south of France as the first race of the seventh round of the championship produced another absorbing contest. Dumbreck, starting from pole, had led the early stages of the race, hotly pursued by the sister car, but lost out in the pit stop battle. The crew of the No.23 car got the job done a full three seconds faster than the No.22 and resumed at the head of the pack. In the dramatic closing stages of the one-hour contest, the Westbrook/Dumbreck car was relegated to fourth place as tyre wear told.

The winner of the Championship Race last time out at Navarra, the All-Inkl.com Munnich Motorsport Lamborghini No.37 of Nicky Pastorelli and Dominik Schwager retired when the engine lost power 20 minutes from the end. The German team took the decision to garage the car and assess the problem in an effort to save the engine for tomorrow's main event. The No.38 of Marc Basseng and Markus Winkelhock, the drivers' championship leaders, was similarly affected and finished seventh.

The Marc VDS No.41 of Fred Makowiecki was the sole surviving Ford runner in fifth with the No.47 DKR of Dimitri Enjalbert and Michael Rossi the highest-placed of the two Corvettes in eighth.

“I just hope it’s not a bad omen for the Championship Race for tomorrow. I stayed behind Peter (Dumbreck) until the pit stop. I stayed out one lap longer and our boys did a good stop and Michael (Krumm) came out in front so all in all it’s a good day.”

“It was an incredible turnaround, the boys did an amazing job in the pits. The target for us was to come out in the lead and stay there. It proved a lot more difficult than I expected as I struggled to get my tyre pressures up and Richard (Westbrook) caught me up and was almost past me two or three times.

“It was a hard battle but no contact was made. Once the tyres were up to pressure I could gain a bit of a gap. Then his (Westbrook’s) tyres went down and I was able to pull a gap. It was great to win but for the championship tomorrow is the main focus.”

“I had a good start and stayed in third place until the pit stop. With the safety car, think it was easier for the first (stint) drivers than the second drivers in this race. Tomas (Enge) drove a good race. His passing manoeuvre was great.”

“At the beginning of my stint, I thought we had a good enough pit stop to get ahead of one of the Nissans but they had fast stops as well. I was fighting hard to catch Richard (Westbrook). He pulled away in the middle of the stint but then it looks like his tyres went away faster than mine.

“In the last three of four laps he had quite a big drop off. I was thinking about the place to overtake. The Nissan is hard to pass, they have the power on the straight but we are slightly better under braking. I was thinking that the Mistral chicane was the only opportunity I could brake a bit later, dive in and try my best and it happened. Luckily I could keep him behind. Three corners later I saw Stefan in the mirror. It’s great to have both cars on the podium for the first time in the championship. We need to make sure we have both cars on the podium again tomorrow.”

“I was surprised by the move Tomas (Enge) made and even more surprised to see Stefan (Mücke) in third place. I didn’t see it on TV as I was already walking out of the garage. I had good battles with the Nissan and the Corvette in the early stages and thankfully got to the pit stop in P4. Stefan had a race on his own for a while then it was only on the last lap that it all started to kick off. It was good result for the team.”

“For most of the race I was on my own because the gap to Tomas was quite big. I had a bit of understeer so I was able to save my tyres which was good for the last lap. Tomas did a brilliant move – I was in the first row to see that, well done to him. I think Richard had some pick-up on the tyres. In the last sector he tried to block me and went wide and for the second last left-hander he left the door open and I was able to outbrake him. It was a clean move so I was happy with that and happy to finish third.”

“What exactly happened I am not sure, I watched the replay on the television and I saw that Marc (Hennerici) tried to go on the inside of turn seven. So there were three abreast into the corner, which is at least one too many and then they hit each other. It is not exactly clear who hit who first or who is in fault but there was damage to the front and there was also a radiator leak, which is not good.

"For tomorrow we will try to repair the car but there are some parts which we don’t have. We are hoping the Ford GT3 in the European Championship will have the spare part otherwise we have a problem for tomorrow.”

“We are on target with P8 for again points tomorrow and we will have new tyres for each of us tomorrow. It was a difficult start, as it was very close between all the cars and it is difficult to overtake. But I think we are on target so let’s see what happens tomorrow. I will not take the stand but the lap time was good comparing to the other Corvettes, so we will aim for top five.”

"We started from P14 and finished P7, which I think is okay. The lap times were really good at the end of the race. I had a problem with the gearbox, as the third and fourth gear was almost lost and I couldn’t shift down. I can say though balance-wise the car was not bad so I’m looking forward to tomorrow.”

“I don’t feel so good about the race of course with the engine failure. We were actually pretty strong in the first stint, and we were looking pretty strong for the second stint but then the engine failed. We decided to come in to not completely blow up the engine and hopefully we can fix it for tomorrow. It will be hard because we have to start at the back and it is not easy overtaking here especially because we are not so fast on the straight, but we will do our best and we will see where we end up. Hopefully we can score some points.”