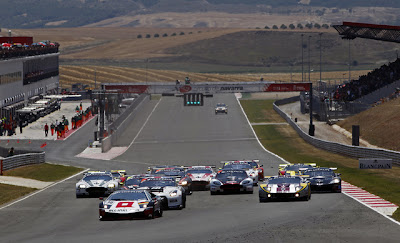 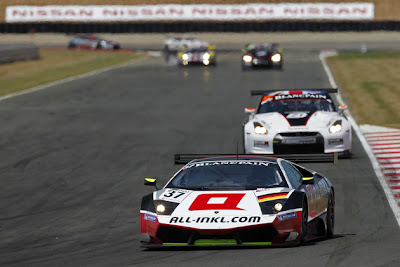 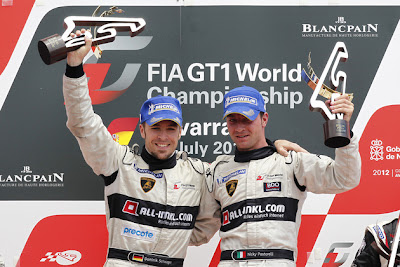 Lamborghini is Lord it at Navarra

The All-Inkl.com Münnich Motorsport Lamborghini team gave an excellent display of formation flying to complete a one-two finish in the Qualifying Race at Navarra. Marc Basseng and Marcus Winkelhock took the chequered flag in the No.38 car from pole position with the sister car, the Lamborghini No.37 of Nicky Pastorelli and Dominik Schwäger, close behind in second. With the Lamborghinis so dominant, the rest of the field was left to scrap over the final place on the podium. After an eventful squabble it was the Marc VDS Ford GT No.41 of Maxime Martin and new boy Bertrand Baguette which took the honours.

The start saw the nr38 Lamborghini on Pole Position get a good start but not as good a start as the nr37 car and Pastorelli moved ahead of Basseng into the lead at the first turn. Behind them Maxime Martin in the nr41 got alongside the nr23 JRM Nissan of Michael Krumm into T2 and there was contact as the Nissan was pushed wide. The Ford nipped through but the Nissan suffered some damage to the exhaust which meant the car was down on power. Krumm dropped back to 15th at the end of the opening lap but struggled on and after a few laps the fault cleared and the German driver started to move back up the order. Martin dropped back behind the nr40 Ford of Marc Hennerici, with the nr11 Exim Bank Team China Corvette of Nico Verdonck and the nr3 Hexis AMR Aston Martin of Stef Dusseldorp in third and fourth respectively, just ahead of the battling pair of Fords.

Martin passed Hennerici on lap 5 and then three laps later overtook Dusseldorp for 4th and was soon challenging Verdonck for 3rd. An aborted attempt to overtake on lap 11 at Turn 9 showed the Ford GT had the extra pace through the corners but lost out to the Corvette on the straights. Two laps later Mar6tin muscled his way past the Corvette at T6 but had to fight hard to keep the place, which he secured at T8.

At the front the nr37 Lamborghini of Nicky Pastorelli and the nr38 car of Marc Basseng were circulating together separated by less than one second as the pitstop window opened. Basseng was the first to pit on lap 16, with Pastorelli pitting a lap later. Markus Winkelhock, now at the wheel of the nr38 car, came down the pit straight just as Dominik Schwäger in the nr37 Lamborghini emerged from the pitlane and Winkelhock swept past his teammate into the lead as Schwäger started to get up to racing speed.

The nr3 Hexis Aston, now with Clivio Piccione at the wheel, also got a better stop and was door to door with Mike Hezeman's Corvette, with the nr11 Team China car getting the better of the Aston. However as Hezeman's braked for T3, the Aston ran into the back of the Corvette damaging the rear bodywork of the car and tyre smoke was seen as he drove away. This later resulted in a puncture for the Corvette and retirement and the nr3 Aston was given a drive through penalty as a result of the accident.

The nr4 Hexis Aston of Christian Hohenadel was now third but being tracked by Bertrand Baguette in the nr41 Marc VDS Ford and Jamie Campbell-Walter in the nr21 Sumo Power GT Nissan. On lap 25 Hohenadel lost the final podium place to the Ford and then soaked up the pressure as Campbell-Walter also tried to overtake the Aston Martin.

Enrique Bernoldi became the latest casualty as he parked the nr20 Sumo Power Nissan at the side of the track with smoke coming from the cockpit caused by an electrical fault, which was dealt with promptly by the Spanish marshals. Bas Leinders also pulled off the track at the end of the pitlane in the nr40 Ford GT.

Having topped the time sheets in Free Practice and Pre-Qualifying and locked out the front row for the Qualifying Race, the German squad must now be strong favourites for victory in tomorrow’s Championship Race. The No.37 will take a five-place grid drop for the main event for an engine-related penalty after both cars suffered engine issues at the previous round at Silverstone.

The eight points for Basseng and Winkelhock took them to the top of the drivers' points table. It also enabled All-Inkl.com Münnich Motorsport to close the gap to Hexis Aston Martin in the teams' standings.

CLICK HERE for the result of the Qualifying Race

CLICK HERE for the Championship Positions after the Qualifying Race

Mark Basseng: “I don’t know why my start wasn’t that good. It was clear before the race that we didn’t want to disturb each other. I saw he had his nose out in front of me at the start, so I backed off a bit. Then we had the chance to pull away from the Corvette. We had a great pitstop, especially our car was not that quick in our stop, but we had a great team effort, and being 1-2 in the qualifying race is pretty gorgeous. Like in Zolder, I was happy with one eye and crying with the other, but here everything is cool. We won the race, our team mates finished 2nd. A perfect weekend up until now. Tomorrow’s the race with the big points, so there’s still a chance and we have to go for it. ”

Markus Winkelhock: “The pitstop was great. I was actually surprised when the car went down; I’d just finished fastening my seatbelt. The car was fantastic during the whole race. There was a little problem with a rear tyre at the end, and I was pushing quite hard the whole race. I think it’s best not to lose concentration. If you back off it’s easy to make a mistake, so I was pushing until the chequered flag, and it worked out. If it’s like this tomorrow, I’m quite happy. It was hot in the car, but it wasn’t an issue; I’m used to it since I did the DTM 4 years ago.”

Nicky Pastorelli: “The start was good, and the whole first stint was pretty okay. I think there was never a big pressure from the third car on us. Unfortunately we lost the race by strategy. Tomorrow we have the 5 grid position penalty, due to registering a 3rd engine at Silverstone, so we’ll have to fight a bit more for it. But I don’t see any problems with that if we have the same speed as yesterday. You can definitely overtake here, and there are good braking points to do it, so I don’t see any problems with it.”

Dominik Schwäger: “It wasn’t very difficult keeping the pace with Markus, because I knew the race was over when I pitted out. I thought there was a gap of 50 m, so I tried to push a bit in the beginning. I had quite good lap times at that stage, but there was no way to catch him. Maybe I could have got closer, but anyway, the temperatures were pretty high, so I tried to save the engine and bring it home, because in the end, you have to pass...they were ahead, there was no reason to fight like crazy for that position. We were both in strong shape today. For us it’s just a shame that we didn’t make it again. Tomorrow’s another race, and I’m hoping for a bit of confusion with the weather, that would be nice. We will see.”

Maxime Martin: “I had quite a good start. I had a bit of a hit with a Nissan in the first corner, so I lost a place, but after that, I tried to manage the tyres in the beginning, and then I could push, and come back to 3rd position. It was a great battle with the Corvette, and the Ford and the Aston as well. It was great and I think we have a good car for tomorrow. Bertrand did a good job at the end, and passed the Aston. He had a little problem with the pitstop with the door, because of the heat. But getting 3rd here with Bertrand for the first time is very good. We’re confident now, and we know that the starts will always be a bit tricky, but we hope it will be okay tomorrow.”

Bertrand Baguette: “I can’t be more happy than winning 3rd for my first race here is a good result. I have to say I’m not as lucky as Marcus, and I struggled a lot with the heat in the car; I’m used to a lot of wind on my helmet, and this time it was very hot. Maxime did a fantastic job. He gave me the car in 3rd position with a big gap, unfortunately we had a problem with the door, so we lost a little bit fo time, but we could come back to 3rd position, so it was good. I think that we have a good chance tomorrow. I will be starting from 2nd position, and if I can keep that position, I think that Maxime can fight with the Lamborghini so we might have a good race tomorrow.”