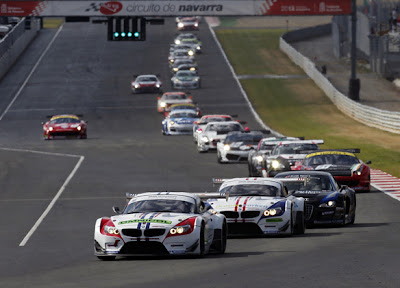 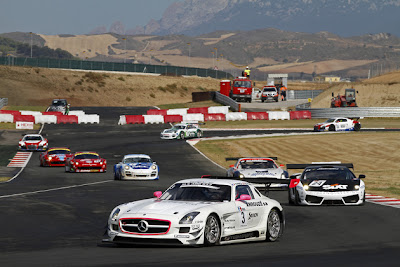 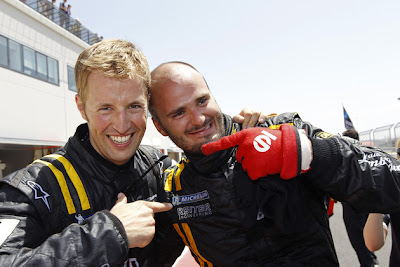 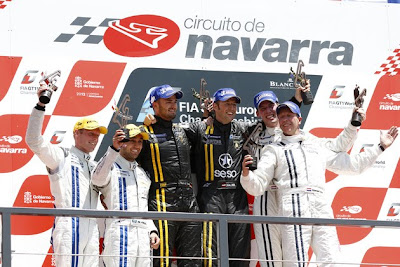 It was a contest between two Princes for victory at Navarra in Round 5 of the FIA GT3 European Championship as Prince Albert von Thurn und Taxis in the Reiter Engineering Lamborghini Gallardo managed to hold off the challenge of Prince Abdulaziz Al Faisal in the nr6 Need for Speed Team Schubert BMW Z4. On lap 30 the gap between the two rivals was 4.7 seconds but by the time the chequered flag was shown at the end of lap 35 this was down to 0.459s as the Lamborghini struggled for grip on worn Michelin rear tyres. However an elated Albert von Thurn und Taxis, who is the reigning GT Masters Champion, celebrated his first FIA GT3 win with co-driver Nikolaus Mayr-Melnhof on the podium.

At the start Mayr-Melnhof swept into the lead from P2, moving ahead of pole sitter Francesco Castellacci in the nr50 AF Corse Ferrari at the first turn and then opened up a comfortable 10 second gap by the time the pit window opened.

Third place went to Round 4 winners Hoevert Vos and Jeroen den Boer in the nr35 Faster Racing by DB MOTORSPORT BMW Z4. Having sat in the pitlane for an extra 15-seconds for winning at Silverstone, the BMW rejoined in 7th place and the Dutch driver spent most of his stint fighting his way past the cars ahead to secure the final podium place at the flag.

Nikolaus Mayr-Melnhof: “I was really lucky to get a good start. I really got the momentum right and could overtake him easily in the first corner. I couldn’t see him, but I was very confident turning in. And then I could see that already in the first corner I could open up a bit of a gap. From then on, I tried to not overpush the car and look after the tyres. It was a great race for me and Albert. It was warm out there, but we were lucky because we have the engine at the back, so we’re a little better off. We are just really happy. It was quite easy. This win means so much to me. I’ve been fighting for so long, and since I saw my dad racing when I was little. And now to be here with a great guy, a friend, someone I can share this with. I’d like to dedicate my win to my cousin who had an accident last week and who’s in hospital. I’m really happy right now, this is a dream come true for me.”

Albert von Thurn und Taxis: “Nicky really left me the car with a fantastic gap, and he really laid down a pace that was impossible to follow for the rest, and it proved once more to others, but not to me, that he is an incredibly fast driver. The tyre maintenance is also probably not as good as he thinks it is. It was a comfortable gap, but at the end of the race, I was really struggling with my rear tyres. In the fast corners, there was no problems at all. But I was losing incredible amounts of time in the slow corners, and Abdulaziz had a really heavy foot today, and I got really scared, because if the car is sliding in the rear, then you are going to make mistakes, especially when braking into the corner and accelerating out of it. The car was really difficult to drive at the end of the race, so I was happy that I could more or less keep a clean line, but I was really struggling. If the race had gone any longer, it would have been impossible to keep up with Abdulaziz’ strong pace. I was surprised at how bad our rear tyres became at the end of the race. Yesterday we drove a new set for the whole free practice and the car maintained a good pace throughout. Okay, we didn’t push from start to finish, but the car maintained a good pace throughout. What you couldn’t see was that there was a sudden drop at a certain moment, where the car really starts to drop dramatically in pace. The qualifying really took it out of the tyres than free practice did. I guess with the heat and all, that’s the way the game works.

"I am incredibly pleased. This is a great moment for both of us, as Nicky said. I will say that we did not go into the championship with low expectations. It was a very unhumble entrance. And in fact, we were humbled at the beginning of the championship, and I hope now that we can maintain a good fight.”

Edward Sandstroem: “The start was okay. We’re not the fastest on the straights, so it’s a bit of a critical point at the start of each race, because if the guy behind us gets the right momentum, then we can struggle. But I had a good start and I could follow both guys. I was alongside the Audi in the first corner, but could maintain the 3rd spot, so it was okay. My tyres were really good. I could keep a constant pace, but unfortunately, the Ferrari in front of me had a spin, and I think I lost 4 seconds on that lap, 4 important seconds, but I didn’t crash into him either, so I was lucky. I’m really happy. I was happy with the car. Our plan from the beginning was to come in late, but plans can always change if needed. I think it was the only way to try to reduce the gap a bit.”

Abdulaziz Al Faisal: “I got the car in a good condition when we went out, and I could see him coming out of the corners in the distance. It stayed that way for 4 or 5 laps, then we started to catch up slowly. Then I knew that we had better conditions than they had, so I had to push. I gave it my all, just to try and get there, maybe push him into a mistake, but he drove very well and maintained the speed, and I think we had a very good battle. There was one incident that I looked into the inside, but I thought it was too risky, and thought to wait and see what would happen, but the Lamborghini is so fast in the straights...Congratulations to them, and it was a really good race. I think Portimao’s my best race, as this is my first year in the European championship, first full season FIA Championship, so to come to Portimao and win the first race was a big blast. Hopefully we’re battling well for the championship and the important thing for us is to get as many podiums as we can and stay ahead, and hope by the end of the season to be champions.”

Hoevert Vos: “I had a very bad start, I lost about 2 or 3 places. I was a little sleepy. But as the race continued, it got better, and I over took a few people. It was a nice struggle. My team did a very good job and made a very good car; the BMW is perfect. We had a 15 sec penalty and Hoevert did a great job. The car stayed so well in both our stints, that’s our secret: our car’s not the fastest, but it is consistent. It stays good. We played with the setup, and made a good choice.“

Jeroen den Boer: “I came out 7th after the penalty, and I was really surprised how good the car was, and the change in the setup. It was really working out and I could close the gap up to the car in front of me, and then he spun himself, and I overtook a Mercedes. But then there was quite a big gap to the WRT Audi, who was held up a little by the Mercedes in front of him, and I was pushing to catch up to him. 2 or 3 laps I needed to catch up to him, and he made a little mistake in corner 6 I think, and I could go through the inside and push him a bit to the side. It was nice to end in P3 again. Finishing in p5 or p6 could also be nice for the penalty, but 3rd is really great. The circuit is really nice. I like the track, it’s not very exciting but it suits me very well, and this was one of the nicer races this year.”