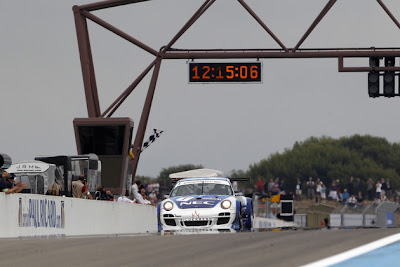 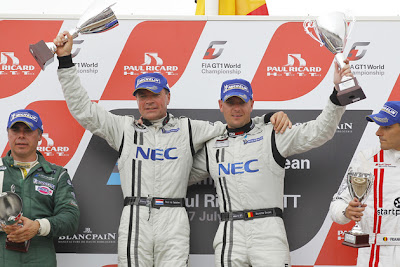 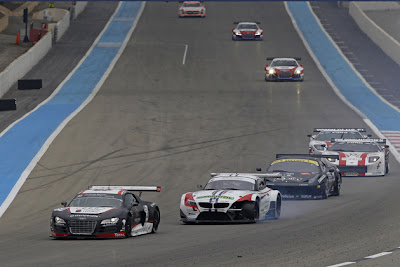 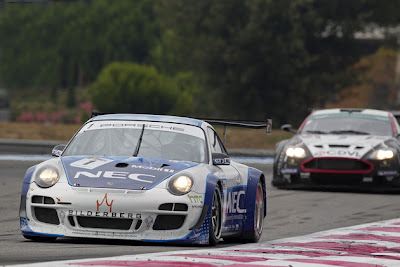 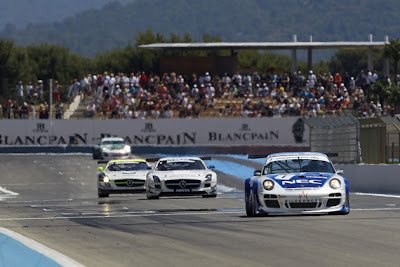 2010 FIA GT3 Team Champions Prospeed Competition returned to the top step of the podium in Round 8 of the FIA GT3 European Championship at Paul Ricard in France. Maxime Soulet, starting from 4th on the grid, got a good start and handed over the Porsche in 2nd place to Paul Van Splunteren. The Dutch driver caught and passed the leading LMP Motorsport Aston Martin DBRS9 of Gael Lesoudier to take the teams first podium finish in 2011. Maxime Martin and Gael Lesoudier scored their third podium finish of the season after leading for most of the 27 lap race. The nr33 Belgian Audi Club Team WRT Audi R8 of Greg Franchi and Enzo Ide was a distant 3rd after Franchi sliced through the field at the start after qualifying in 14th place. Ide took control of the Audi and brought the car home for the third podium finish of the season.

Francesco Castellacci started in a lowly 12th place on the grid and he and Federico Leo fought their way up to a creditable 4th place in the AF Corse Ferrari 458 Italia to leave Paul Ricard with a four point advantage in the Driver's Championship over Enzo Ide and Greg Franchi.

Maxime Soulet: “I had a good start. I think I was 3rd at turn 1 and then 2 cars hit each other and I came out 2nd. I just had to keep on being 2nd and I knew that Paul would do the rest. Good job Paul. I was keeping the tyres cool because I knew that Paul would need them at the end, so I let the Audi get past, and I knew he was going to be slower at the end, so I passed him before we came into the pits, and then we came out second, and Paul did a brilliant job getting back on the Aston. The team really needed this result, and we deserved it yesterday already, but I made a mistake with the pitstop, leaving the pits too early. I was a bit stressed at the start, trying not to make any mistakes because of my mistake in the last race. I’m really happy with this.”

Paul van Splunteren: “I’m extremely pleased because when we started the season, we really thought we’d be on top of our game, because we practiced a lot of things that we didn’t do last year, we had the car from last year, the same team, Max is as good as Marco, so we thought we would be up there. We were so disappointed that in the winter, the newer cars all had a step ahead. So, finally now with the little breaks we had in the balance of performance I think we’re there. This circuit suits us very well, as this is a high speed circuit and our car is fast on the straights; you can see it on the sector times. Anyway, I’m extremely pleased for all the team, for Rudi, for Max, for us, because we’ve been working so hard. Yesterday we were nearly there, today we’re really on top of it, and I hope this will be a turnaround for the championship. Slovakia Ring, nobody has been there, so we’ll see if we can pull some stuff there. The race was relatively simple, because Max did fantastic job, we did a good pit stop, I really went out on the green light and checked that it was 0 on the line, and then Gael Lesoudier didn’t make life too difficult, because it was better for us both to be on the podium. I had some more speed in the car, so it was an easy job. Then I thought, why not practice a bit for Spa, and let’s do some nice laptimes, and then I realised that I did have to bring the car home, so I cooled off a bit. That was relatively simple.”

Maxime Martin: “I took quite a good start. I think the Audi got a really bad start, so it was quite easy at the first corner. I could push and stay in front. I had a little contact with the Mercedes that I can’t explain. After that, I had a little gap. We knew we were in quite a difficult place with the tyres by the end of the race, so Gael did a really good job and didn’t take any risks to stay in front. We got our 3rd podium of the season, and a lot of points, so it’s very good for us. This has been a good track for Aston Martins. We had a bad race yesterday and struggled a lot with the tyres, but today it was much better, and here we are again on the podium.”

Gael Lesoudier: “We didn’t think that we’d get a podium today because if you look at yesterday’s race, the efficiency of our tyres decreased regularly, and it was so hard to keep the positions up til the end of the race. Max did such a good job at the start of the race, so I’m very pleased for the team and for us, because we can keep a good position in the championships and we’re expecting to have a good end of season.”

Greg Franchi:“After having rather poor qualifying because we haven’t been at Paul Ricard before as a team, I took a good start. I passed a few cars, and handed the car over in 6th or 7th to Enzo, and he finished the race. It’s very good for the championship, because I think this takes us to 2rd in the championships before the last two races. It’s good.”

Enzo Ide: “We had a good pit stop. We did what we also do in a pit stop, nothing special, so it seems that the others did something else that we do. When I came out I was 4th or 3rd, but the gap with the guys in front was more than 20 seconds, so there wasn’t much I could do. Last race in Navarra, I caught up from 3rd at the end of the race, but here it was not possible. The others were as fast as me, which wasn’t the case in Navarra, so I just drove safely, not pushing hard, not making any mistakes, just trying to get the points for 3rd.”