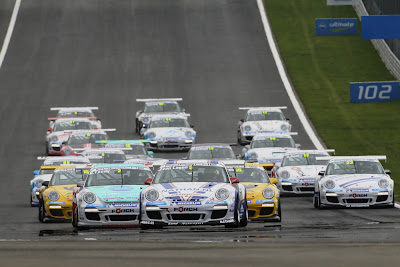 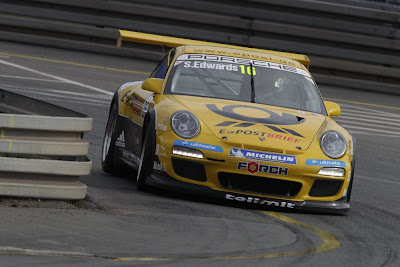 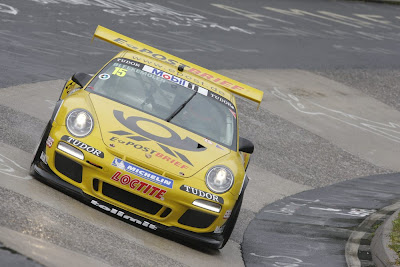 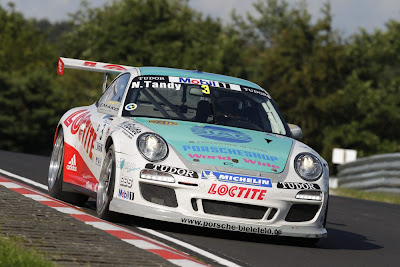 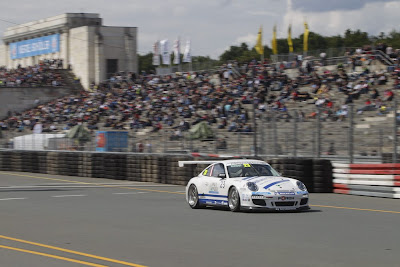 Porsche Carrera Cup Deutschland, round 7 on the Nürburgring

Stuttgart. The Porsche Carrera Cup Deutschland turns onto the finish straight of the season with an unrivalled balance: Six different winners from six races underline how highly competitive Germany’s fastest one-make series is. At round seven on 7th August on the 3.629 kilometre sprint version of the Nuerburgring’s Grand Prix circuit, front-runner Sean Edwards is determined to defend his lead in the points. After his maiden Carrera Cup win on the Norisring, the Deutsche Post by tolimit pilot from Britain holds a 14-point advantage over his teammate from the Netherlands, Jeroen Bleekemolen. Sitting a close third is Britain’s Nick Tandy (Konrad Motorsport), who had held the lead for the first four races of the season.

“I’m looking forward to this interesting circuit,” says 24-year-old Sean Edwards. “I came second last year and the track suits me. It would be great if I could win this time, but it’s not crucial. More important is that I hold onto the championship lead.” The London-born Monaco-resident put in the groundwork for his excellent position for the title fight with regular top results. “The competition is incredibly tough this year. There are ten drivers who are good for a win. It would be something very special if I could take home my first makes championship title at the end of such a season.”

Jeroen Bleekemolen knows this feeling well. The winner of the Zandvoort race claimed the championship at the international Porsche Mobil1 Supercup in 2008 and 2009. With consistent top results, the Briton and the Dutchman are not only sitting in positions one and two in the drivers’ classification. With three races to go, their Deutsche Post by tolimit team also ranks a clear first in the team standings.

Currently sitting third overall, Nick Tandy will be focussing on closing the gap to Edwards and getting past Bleekemolen. For the winner of the season-opening round and last year’s vice-champion his retirement at the Porsche Carrera Cup World Cup cost him his lead. Tandy doesn’t have the fondest memories of the Nuerburgring: Last year he went home empty-handed after a scuffle at the start. At least the rivals chasing him don’t have much of a chance to catch him. Denmark’s Nicki Thiim in fourth and Martin Ragginger in fifth are simply too far behind to pose any threat. The Dane racing for Hermes Attempto Racing is one of the season’s six winners after his triumph on the Lausitzring. As his best result so far, the Schnabl Engineering pilot from Austria has just one podium placing to his credit.

The race will be broadcast live on the official Porsche Carrera Cup Deutschland website www.porsche.de/carreracup on 7 August from 10.15 hours. On 10 August, TV station Sport1 televises a race review, interviews and reports from 22.15 to 22.45 hours in the Carrera Cup Magazin.