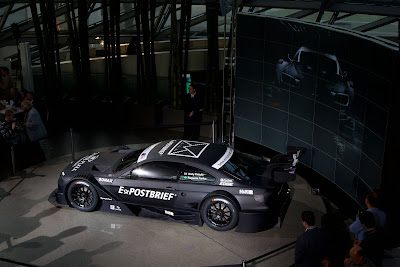 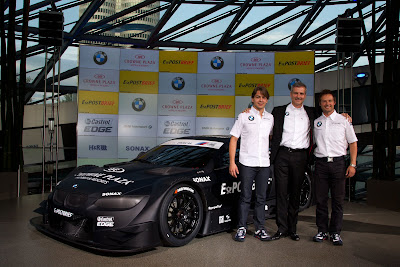 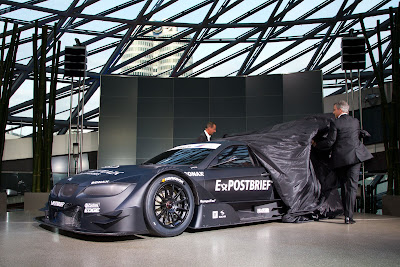 Munich, 15th July 2011. Just two weeks after the official roll-out of the new racing car for the 2012 DTM season, BMW presented the BMW M3 DTM Concept Car. Dr. Klaus Draeger, Member of the Board of Management of BMW AG responsible for development, and BMW Motorsport Director Jens Marquardt unveiled the car on Friday evening in the Double Cone building at Munich’s BMW Welt. As part of the DTM event in the Olympic Stadium, the BMW M3 DTM Concept Car will be on show to motorsport fans and visitors to BMW Welt at the weekend.

The car offers an initial impression of what the BMW M3 DTM will look like when it lines up at the start of the 2012 season. However, the vehicle was not the only star of the evening at BMW Welt: BMW Motorsport also presented the first two drivers to be confirmed as wearing the company colours in the DTM as of next season – Andy Priaulx (GB) and Augusto Farfus (BR). Furthermore, the first partners of BMW Motorsport for 2012 were introduced.

“It is good to see how our DTM project is picking up speed,” said Dr. Draeger. ”Next year, BMW returns to the DTM after two decades. We will be facing our main competitors in the premium sector – and are already looking forward to this challenge. The DTM comeback sees BMW return to its roots. We have enjoyed great success in production car racing in the past, and I am convinced we will follow on in 2012 where we left off. Everyone at BMW Motorsport is working hard to ensure we get off to a successful start next season.”

Marquardt added: “Getting a new racing programme up and running is a bit like doing a jigsaw. New pieces are added almost every day, and we must put them together to create the big picture. The BMW M3 DTM Concept Car is an important milestone on our route to the start of the 2012 season. The roll-out of the car was successful, and we are now starting our test programme out on the track. Drivers Andy Priaulx and Augusto Farfus are also involved and will form part of our driving line-up in 2012. Their impressive performances in touring car and GT racing make them ideally suited to the DTM, and we are sure they will leave their mark on this series too. It is obviously just as important to have strong partners on board, and we were able to present some of them today. The pieces are fitting together perfectly, so we can definitely say: our preparations for the 2012 season are going according to plan.”

When BMW returns to the DTM next season, it will also mark the comeback of a racing legend: between 1987 and 1992 the BMW M3 celebrated no less than 40 wins and over 150 podium finishes in this series. The BMW M3 DTM is based on the fourth generation of the most sporty production car to emerge from BMW M. BMW Motorsport has been developing the DTM version of the car since autumn last year, when the Board of Management of BMW AG announced the company’s return to the DTM.

The DTM regulations for the 2012 season stipulate all cars must use a certain number of standard components. This is to guarantee that development costs remain reasonable and are considerably lower than in other top motorsport categories. Despite this, the BMW Motorsport engineers have been able to call upon the immense technical resources of the BMW Group and apply their innovation to establish performance advantages over their rivals in areas such as engine and aerodynamics.

The result of this work is a spectacular racing car, which is set to thrill DTM fans. The powerful V8 engine equipped with the air restrictor as detailed in the technical regulations generates approximately 480 bhp. The car accelerates from 0 to 100 km/h in about three seconds and boasts a top speed of approx. 300 km/h.

Successful drivers from within the own ranks.

Priaulx and Farfus have been confirmed as the first drivers to take to the track with the BMW M3 DTM in the 2012 season and during the intense test phase. Both drivers arrive in the DTM with impressive wins and titles to their names. Priaulx won the 2004 European Touring Car Championship for BMW, and followed that up with three World Championship titles between 2005 and 2007. The racing driver from the Channel Island of Guernsey (GB) has also proven his class in GT racing, with victory at the 2005 Nürburgring 24 Hours (DE) and first in the GT class at this year’s 12-hour race at Sebring (US).

“The DTM will be a big challenge for us all,” said Priaulx. ”Together with BMW, I have celebrated success in many different disciplines and behind the wheel of some fantastic racing cars in recent years. I am more than confident that this will also be the case in the DTM. The BMW M3 DTM looks fantastic. I can hardly wait to get to know the car better in the coming tests, to contribute to its development, and ultimately to sit in the cockpit for the first DTM race in 2012.”

Farfus can also look back on a successful career with BMW. This is proven by 15 wins in the World Touring Car Championship, the triumph at the Nürburgring 24 Hours in 2010, and many more successful races in BMW racing cars: the Brazilian has all the essentials to be successful in the DTM. “I am delighted BMW is giving me the opportunity to race in the DTM,” said Farfus. “You always need new challenges in life. That is why I cannot wait for my debut in this series. The opposition is tough and has more experience in recent years, but BMW Motorsport is working fantastically to ensure we should be competitive right from the word go. We want to learn as quickly as possible. Who knows, maybe we can already challenge the established manufacturers a bit in 2012.”

Three teams will compete in next year’s DTM for BMW: BMW Team Schnitzer, BMW Team RBM and BMW Team RMG. The exact allocation of drivers to the three teams will be made at a later date. First, the teams are working hand in hand with BMW Motorsport to press ahead with the development of the BMW M3 DTM.

The first partners of BMW Motorsport in the DTM have also been confirmed. The international hotel brand Crowne Plaza Hotels & Resorts, part of the InterContinental Hotels Group (IHG), is continuing its cooperation with BMW as Premium Partner. Deutsche Post AG is also involved as a new Premium Partner.

“In order to succeed in the DTM, strong partners are as vital as strong teams, cars and drivers,” says Marquardt. “Even at this early stage BMW is in the fortunate position of having secured a raft of respected team sponsors and partners, all of whom perfectly complement the brand and identify totally with our ambitions. We are pleased that long-standing partners have also elected to remain with us. However, for us it is equally satisfying that additional top companies have decided to partner BMW’s DTM campaign and share in the challenges which face us.”

Janis Cannon, vice president global brand management, Crowne Plaza said: “Many BMW drivers tend to be the same people that check into our hotels around the world every day which is why it’s such a great brand fit for us. Our partnership with BMW is growing from strength to strength and is now in its fifth year. We wish the BMW team the best of luck on the track.”

Ingo Bohlken, Chief Marketing Officer BRIEF Deutsche Post AG, said: “The DTM has long been the German motor racing series, and thrills millions of fans, both live and on TV. Therefore for Deutsche Post it provides the ideal communications platform. As the world’s most popular touring car series, the DTM represents speed, dynamics and team spirit – all attributes that distinguish Deutsche Post. We welcome the return of BMW, and look forward to many exciting races.”

Castrol Edge will continue to be BMW Motorsport’s Premier Technical Partner in the DTM. “The combined effort with BMW in motorsport is an important component of our partnership,” said Martin Rasbach, BMW Partnership Manager Castrol Lubricants. “The knowledge gained by pushing products to the limit in motorsport enables Castrol to create the high performance lubricants used by millions of drivers everyday and demonstrates the power of building long term trust and value through shared technology and expertise.”

In addition, H&R, SONAX and ZF Sachs were introduced as Official Partners in Munich, Sympatex was presented as Official Supplier. The company logos will be visible on all cars used by BMW Motorsport.

Manfred Hoffmann, Managing Shareholder of SONAX GmbH and owner of the Hoffmann group, explained: “We are delighted that the SONAX brand will once again be present on the circuits used by the DTM. Above all we are pleased that BMW Motorsport’s comeback has provided us with this opportunity. We would like to thank our partner BMW, and wish the entire team a ‘bright’ start to the 2012 season."

Dr. Peter Ottenbruch, ZF Friedrichshafen AG Board Member responsible for Technology, said: “For many years we have worked extremely closely with BMW, both on the company’s production cars and in motorsport. In international motor racing the DTM is a highly respected series, and we are very pleased to be able to continue our successful partnership with BMW Motorsport in this series.”

Hartwig von der Brake, Marketing Manager of H&R, said: “BMW and touring car racing were two concepts that were inseparable for me even when I was a teenager. At that time, I was a young fan following the action on the race track. Today I’m delighted that we have been able to get such a fantastic project off the ground with such a strong partner.”

“As a developer and supplier of high-tech functional fabrics, Sympatex unites top performance and the ecology,” said Michael Kamm, CEO of Sympatex Technologies GmbH. “We – like BMW Motorsport – place enormous value on the efficient and responsible combination of resources and optimum performance. We look forward to partnering and supporting BMW in the forthcoming season.”