American Le Mans Series, round 3 in Lime Rock, USA First podium result of the season for the title defenders 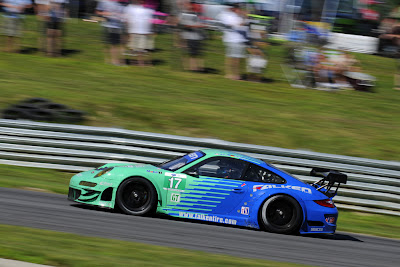 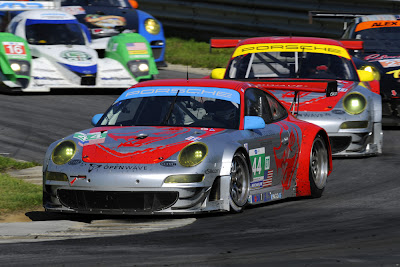 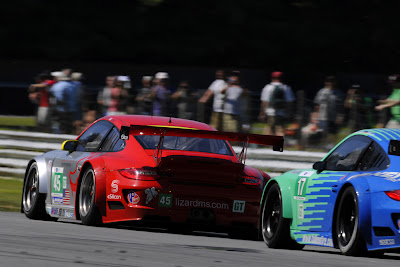 First podium result of the season for the title defenders

Stuttgart. In the American Le Mans Series, the title defenders clinched their first podium result of the season at their third attempt. With the Porsche 911 GT3 RSR fielded by Flying Lizard Motorsports, Porsche factory pilots Joerg Bergmeister (Germany) and Patrick Long (USA) finished second in the GT class at the Northeast Grand Prix in Lime Rock to improve their championship position.

The race on the short 2.478 kilometre circuit in the US state of Connecticut was thrilling from start to finish. And it began well for Porsche: Patrick Long snatched second place right at the start and defended his position to the first pit stop and driver change. His teammate Joerg Bergmeister, who tops the winners’ list with five victories from the last five years on this circuit, fell back just once to third place after another pit stop behind his works driver colleague Wolf Henzler, but was quickly able to regain his position.

Bergmeister went on to deliver a spirited fight for the lead, at times only two seconds adrift of the front-runner. But with three laps to go, his result looked in jeopardy when tyre damage forced him into the pits. As always, the Flying Lizard crew worked swiftly on his number 45 Porsche so that he was able to defend his second place. At the flag only 20.387 seconds separated Bergmeister and Long from their first win of the season.

“That was a lively race,” said Joerg Bergmeister. “Today we were able to fight for victory and I’ve tried everything to continue my winning streak after five straight Lime Rock victories. Unfortunately, a puncture prevented this. Still, it was our best result so far this season. Our entire team has worked extremely hard for this.” Patrick Long said: “I’m very satisfied. Today we have earned plenty of championship points. Because all of our direct competitors had problems, these points are especially valuable. Our car was perfectly set-up over the entire weekend. It’s a shame that we were just a few seconds off clinching victory.

Bryan Sellers drove the first stint for the Falken Tire squad. Cleverly, he kept out of any trouble on the tight circuit, and his teammate Wolf Henzler did the rest. With an early refuelling pit stop 1:15 hours before the flag, they took their opponents by surprise and turned up in second place when the rest of the field pitted for fuel. Wolf Henzler too had his big moments: 30 minutes before the finish he brought the Porsche 911 GT3 RSR into the pits with suspected tyre damage. Luckily, he had only picked up rubber from the track. And in the final laps, problems with the fuel pressure cost him a safe third place. He took the flag in fifth.

In the second Flying Lizard Motorsports-run Porsche 911 GT3 RSR, works driver Marc Holzer (Germany) clinched seventh at his Lime Rock premiere together with American Seth Neiman. He was clearly pleased with this result. “When I took over the car we were running last,” he said. “The chase was huge fun. I was able to put in very competitive times on this unfamiliar track.” Sascha Maassen (Germany) and Bryce Miller (USA) brought the Paul Miller Racing Porsche 911 GT3 RSR home in sixth place. Victory in the GTC class went to Americans Dion von Moltke and Mike Pierce with a Porsche 911 GT3 Cup.

Round 4 of the American Le Mans Series is held on 24th July in Mosport/Canada.

All race cars start together but are classified separately. This ensures exciting and diverse racing with many overtaking manoeuvres. Points are only awarded for placings in each class.