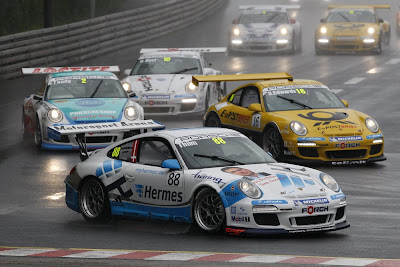 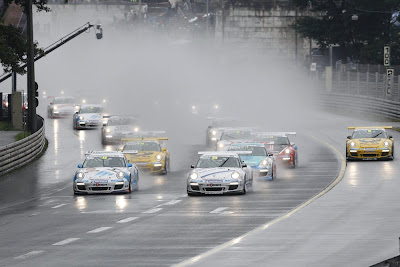 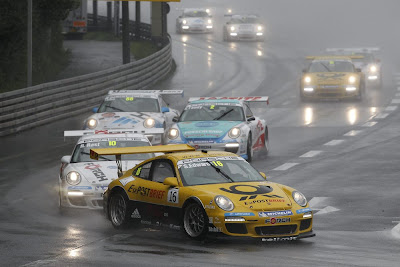 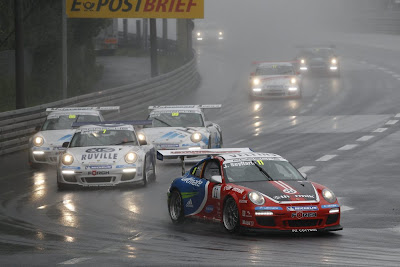 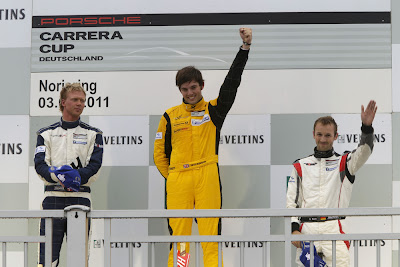 After a rocket start, second qualifier Martin Ragginger (Austria, Schnabl Engineering) led the field into the Grundigkehre. Ploughing through from sixth on the grid came Nicki Thiim, with Edwards in third. In contrast, pole-sitter Nick Tandy (Great Britain, Konrad Motorsport) didn’t get away as well and by the first corner found himself lying fourth. In the fifth lap, Sean Edwards in his yellow Post-911, got around the Grundigkehre-hairpin better than Ragginger to snatch the front position. The Briton, who had taken up the sprint from fifth on the grid, held tight to lead and never looked back.

In the following laps, the Austrian fell victim to another opponent. This time it was René Rast (Germany, Förch Racing) to overtake Ragginger in the same spot. The winner of the Porsche Carrera World Cup initially thought he was in a secure second place, but towards the end of the race Nicki Thiim moved closer with consistent and slightly faster lap times. In the 31st lap of the race, the Dane finally nabbed the German and clinched his second best result of the season.

Jan Seyffarth (Germany, SMS Seyffarth Motorsport) also experienced an eventful race that yielded fourth and his best result of the season. Taking up the sprint from third on the grid, the Carrera Cup vice-champion of 2008 at times fell back as far as eighth place, but worked his way up the field as the track dried. Far behind Seyffarth came Nick Tandy in fifth. The Briton, who secured five phenomenal victories in his debut 2010 season, had to fight to keep his 911 on the track.

With fifth place in Nuremberg, Tandy, who had led the points for the first four rounds this season, now sits 16 points shy of his compatriot Edwards. And two points off Zandvoort winner Jeroen Bleekemolen (Netherlands, Team Deutsche Post by tolimit) who saw the flag in Nuremberg in sixth place. Seventh, despite a damaged radiator, went to the Spielberg winner Jaap van Lagen. Shortly before the flag, the Land Motorsport pilot touched the rear of Norbert Siedler’s 911. Driving for Aust Motorsport, the Austrian secured eighth ahead of his compatriot Martin Ragginger. At his first race in the German one-make series, Supercup pilot Kévin Estre (France, Hermes Attempto Racing) crossed the finish line in tenth.

TV station Sport1 broadcasts race highlights, interviews and reports on 8 July from 23.30 hours until midnight in the Carrera Cup Magazin. A one-hour report on the Porsche Carrera World Cup, the greatest Porsche race in history on the Nürburgring, is televised by Sport1 this coming Monday, 4th July, at 17.30 hours.

Sean Edwards (winner): “I got too much wheelspin at the start so I didn’t get away well. But my teammate from last year, Sascha Maassen, shared a couple of tricks with me for the first corner and I profited from them. Martin Ragginger experienced traction problems, so it wasn’t hard getting past him. For a while I feared that Réne was closing in. But he became caught up in a duel with Nicki Thiim and that gave me room to breath. With three races left on the calendar we’re on top of the driver and team classifications – it doesn’t get better than that.”

Nicki Thiim (second): “The race was great fun, what a highlight. I fought with many drivers, that’s the sort of racing I love. It proved difficult to get past René, but I did it in the end. If the race were only a couple of laps longer I might have overtaken Sean, too, but I didn’t want to take that risk. Second place is tremendous.”

René Rast (third): “My start was average and I lost a couple of positions, but I made them up again. Sean took off at the front and managed to distance himself a bit. Towards the end of the race, Nicki Thiim came shooting up from behind. We fought each other for some time but then I had to let him pass, he was simply too fast. Third place was the maximum I could manage today, so I’m okay with that.”

Round 7 of the Porsche Carrera Cup Deutschland takes place on 7 August on the Grand Prix circuit of the Nürburgring.