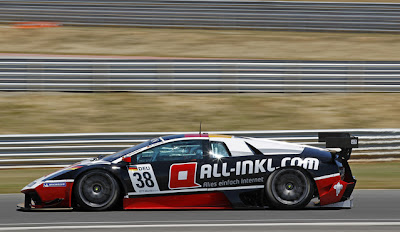 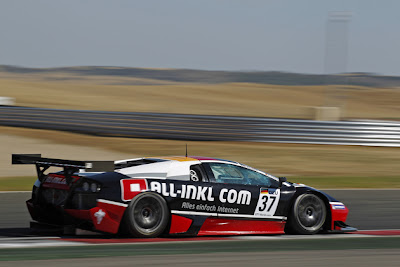 All-Inkl Lamborghini 1-2 on Day 1 in Spain

Last year Lamborghini ruled supreme at Navarra and All-Inkl have carried on where Reiter left off by posting the two fastest times of the 80-minute Free Practice session for Round 6 of the FIA GT1 World Championship in Spain. Markus Winkelhock, in the nr38 All-Inkl.com Munnich Motorsport Lamborghini Murcielago 670 R-SV with a 1:37.639 lap, 0.265s ahead of Dominik Schwager in the nr37 All-Inkl Lamborghini. The nr22 JR Motorsports Nissan GT-R of Richard Westbrook and Peter Dumbreck were third fastest, just 0.008s behind the second placed Lamborghini and 0.052 quicker than the nr11 Exim Bank Team China Corvette of Mike Hezemans and Nico Verdonck.

The two All-Inkl.com Münnich Motorsport Lamborghini Murcielagos were once again filling the top two places on the timing sheet after the Pre Qualifying session. However in a change from Free Practice it was the nr37 Lambo of Dominik Schwäger and Nicky Pastorelli that was ahead of the nr38 car of Markus Winkelhock and Marc Basseng. The nr37 car posted a time of 1m36.743, with the nr38 car 0.074s slower. The nr11 Exim Bank Team China Corvette of Mike Hezemans and Nico Verdonck was once again the fastest non Lamborghini in the session finishing 0.467s behind the faster of the two Lamborghinis and ahead of the nr40 Marc VDS Racing Team Ford GT of Bas Leinders and Marc Hennerici.

"I am very happy with our position today but tomorrow is the important day where we will have to make sure we get it together for Qualifying. Last year we were quick but had some issues – it was also a bit cooler. I am really looking forward to the race."

"I haven’t driven this track before so the most important thing for me today was to learn the track. We are not in bad shape and the car is pretty quick as was Marc (Basseng) so we should aim for the front end of the field tomorrow in Qualifying – maybe the first and second row should be possible."

"Today went quite well actually considering it is my first time in a GT car since 2008. It’s good to be back in these cars as they are a lot of fun to drive. Obviously they are much different to the single seater cars I have driven in the past. For this weekend we will see how the car performs on new tyres tomorrow but overall I am happy. We will aim to make it into Q3 tomorrow and hope we can maintain a good showing."

"I think the sessions went well today and we showed we have some decent pace which I hope we can take into the rest of the weekend. I would say we are well prepared for tomorrow’s Qualifying session. Navarra Circuit is definitely not the best suited track for our car but we must try to do our best and hope we can finish on the podium on Sunday and score some good points."

"We tried a few different set ups on the car today and used different sets of tyres to see what the pace of the car is. I’m pretty confident and the balance of the car is good. It is really warm here so we were looking at how the tyres will behave so we are prepared for the rest of the weekend. The aim for tomorrow’s Qualifying session is for sure to get into Q3 and to be as far forward as we can and get as many points as possible. It’s very important for us to score a lot of points here this weekend for the championship fight."

"Today was my very first race sessions in the Nissan at a race weekend and also this circuit is new for me as well so I was learning everything from new. I am quite satisfied but to be honest we need to find some more pace because the car was difficult to drive. We’ll continue to work hard for the rest of the weekend – my hope is we can make the top five in tomorrow’s Qualifying session."

“We were actually quite pleased with Pre-Qualifying today. This is a track that you wouldn’t associate with the Nissan running well on but we are making the best of what we have. The GT-R is performing well considering it is a slow and twisty circuit. The Lamborghini’s and Ford’s look quick but we are confortable with our race pace. Tomorrow, we hope to get to Q3.”

"The two practice sessions today went OK – the track is pretty straight forward and fairly slow to drive. The car is running fine but we lose a lot of traction so we have to find a way to keep on going in the race. We will try to get as close as possible to the front of the field but first we’ll see how Qualifying goes for us tomorrow."