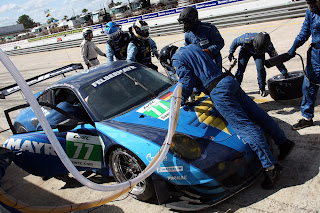 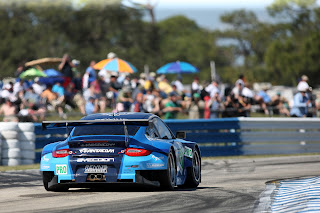 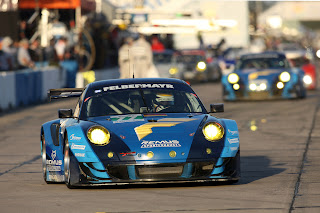 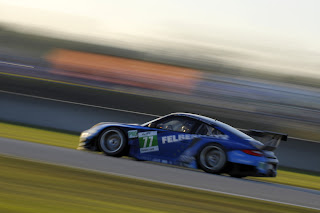 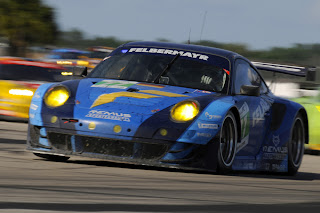 Stuttgart. On the storied Spa-Francorchamps race track in Belgium round two of the World Endurance Championship is held on 5th May. Porsche works drivers Marc Lieb (Germany) and Richard Lietz (Austria) contest the LMGTE Pro class at the wheel of Felbermayr-Proton’s Porsche 911 GT3 RSR. At the season-opening race in Sebring/USA, the pair finished in second and with this celebrated a great start into the new long distance world championship.

Spa-Francorchamps is one of the classic venues on the calendar of the new World Endurance Championship. The race runs over six hours like all other rounds except the twelve hour race in Sebring and the Le Mans 24 hour race.

The 7.004 kilometre Circuit Spa-Francorchamps is one of the most interesting and demanding race tracks in the world. 1954 marked the first sports car race to run on the Ardennes track which stands for fascinating motorsport history with triumphs and tragedies. Spa-Francorchamps is most famous for its daunting Eau Rouge corner.

Porsche works drivers Marc Lieb and Richard Lietz contest the GTE Pro class at the wheel of Felbermayr-Proton’s Porsche 911 GT3 RSR. Christian Ried (Germany), Porsche Cup winner Gianluca Roda (Italy) and Paolo Ruberti (Italy) are keen to repeat their victory from Sebring in the GTE Am class, where only last year’s cars and one professional race driver per vehicle are permitted. The Porsche 911 GT3 RSR of Ried and Roda is also entered by Felbermayr-Proton.

As the top model of Porsche Motorsport’s customer racing vehicles, the Porsche 911 GT3 RSR headed into the 2012 racing season with extensive modifications. Particularly noticeable is the widening of the body by 48 millimetres. The aero kit is supplemented by a new intake air ducting. The particularly efficient six-cylinder boxer engine generates 460 hp (338 kW) with a mandatory air restrictor and drives the 310 millimetre wide rear wheels. The diameter of the front wheels has increased to 680 millimetres.

On the Circuit Spa-Francorchamps Porsche celebrated not only endurance wins in the glorious seventies and eighties but also in the modern era. In 2006 and 2007, Marc Lieb won the sports car class with the Porsche 911 GT3 RSR. In 2009 and 2010, he and Richard Lietz secured two more class wins in the Le Mans Series. In 2003, Lieb claimed overall victory at the Spa 24 Hours with Porsche, and followed up with GT class wins in 2005 and 2007. The Porsche RS Spyder was successful in Belgium, too: In 2008 and 2009, the sports prototype from Weissach clinched LMP2 class honours.

Hartmut Kristen, Porsche Head of Motorsport: “The new World Endurance Championship began very well in Sebring for our Felbermayr-Proton team. With this performance the squad will also hold their own in Spa-Francorchamps, although the opposition will be even stronger. The Ardennes race track is closely tied to historic Porsche endurance racing successes. It’s a very demanding challenge that our works drivers Marc Lieb and Richard Lietz have already mastered extremely well with class victories in the Porsche 911 GT3 RSR in the past years.”
Marc Lieb: “I’m looking forward to contesting the new World Endurance Championship in Spa. Aside from the Nürburgring-Nordschleife, the Spa circuit is my absolute favourite. The track is flowing and very challenging, not to mention the fantastic corners. It’s simply great fun to drive the 911 GT3 RSR there. We made a great start to the season in Sebring and now we want to continue in the same vein. I’m feeling very confident that we’ll manage it.”
Richard Lietz: “I really like the circuit and Marc is one of the Spa specialists, so for that reason alone I’m feeling very optimistic about this race. We know we can be fast with the new 911 GT3 RSR. Our second place in Sebring has put us in a good position for the rest of the season. The race in Spa runs over six hours, in Sebring we led for six hours – perhaps that’s a good omen.”

Sports prototypes and GT vehicles race in the new World Endurance Championship. They are divided into four classes that start together but are classified separately:
LMGTE Pro class: This class is reserved for slightly modified standard sports cars with 440 to 500 hp and a minimum weight of 1,245 kilograms (e.g. Porsche 911 GT3 RSR).
LMGTE Am class: Like the LMGTE Pro, but the regulations stipulate that only last year’s cars are eligible and there must be no more than one professional driver per vehicle.
LMP1 class: Sports prototypes with up to 550 hp and a minimum weight of 900 kilograms.
LMP2 class: Sports prototypes with around 440 hp and a 900 kilogram minimum weight.