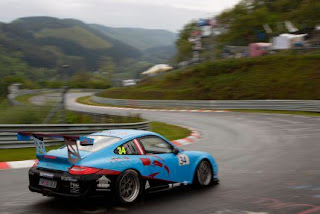 "To be fast on the Nordschleife be, you need a lot of routine and Experience," was the general opinion in the paddock - so far: Because with Philipp Eng and Philip Frommenwiler managed two of the youngest driver of the Porsche Carrera Cup the jump to the forefront. "I am extremely happy with this pole position," Philipp Eng cheered with joy. "At one place in my first Carrera Cup fourth qualifying I could not even dream about."

The poles of his protégé and MRS Team Principal Karsten Molitor had not expected. No wonder he suggested England before qualifying a bizarre bet: "Will he not make the top 3, he must have a bald cut. In the event that he manages the impossible but I have to believe it, "Molitor said before qualifying. The question about the winner of the bet would be to Philipp Eng's poles have been clear. We hope you enjoy your visit to the hairdresser, Mr. Molitor!
Closely behind Nicki Thiim was second in qualifying. In the race, the Danes, however, from seventh to start the race because he was occupied after his accident at the Lausitz ring with five criminal courts. The honor of holding it upright Attempto Racing teammate Philip Frommenwiler.The Swiss went at the last second a lap time of 9:55.586 minutes, and it landed behind Sean Edwards in fourth place.
"It could have been worse," Frommenwiler tried after his best ever result in the Porsche Carrera Cup to keep the ball flat. "I am very pleased and thank the whole team for the great work. Now I am optimistic for the first race, in which I will go from the second row, "said the 22-year-old.Behind him start Jaap van Lagen and Kévin Estre, at the end of the session, its still 911 wegschmiss. The top 10 in the starting line-up complete Michael Ammermüller, Norbert Siedler and René Rast. The tolimit driver drove while the fifth-fastest time, but - just like Thiim - five places downgraded.

He is taking the New Zealand flag at the start to really feel at home, Peter Scharmach but at the Nurburgring. The amateur racers, the championship race at the fifth absvolviert a guest start surprised with 14th place in qualifying and ranking first in the B-evaluation. The supervised by Lechner Racing racers can look back on many years of experience on the Nordschleife. Most recently, he ran for Manthey Racing in the VLN Long Distance Championship, one Cup Porsche.
On the second and third rows of the B-evaluation in the two Dutch Hoevert Vos and Harrie Kolen one. Vos lacked 17.716 seconds at the peak time, which even the Amateur Michael Christensen, the third place at Lausitz Ring, could leave behind.
The race starts on Saturday, 19 May, at 11.35 clock. The television station is Sport1 the course that leads through four rounds, through its reporting on the 24-hour race broadcast live. In addition, it is on the official Porsche website give a live stream of high quality - with editorial content before the actual live stream, live timing and commentary in German and English
racecam.de
Posted by AmigosRacing/MRS GT. at 11:51