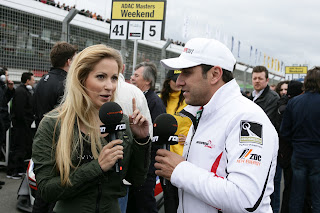 
Debut for Andrea Kaiser: Andrea Kaiser hosted the live TV broadcast of the ADAC GT Masters for the first time on kabel eins. As of the race in Zandvoort, Kaiser will be hosting the live TV broadcasts of the "League of Super Sports Cars" alongside Jan Stecker. The first interview on Saturday for the host of Champions League football on SAT1 was Christian Abt (44, Kempten/Prosperia uhc speed - Audi R8), the 2009 ADAC GT Masters Champion. Kaiser travelled to Zandvoort with her husband, former footballer and Champions League winner, Lars Ricken.

Frentzen answers ahead of the race: Former Formula 1 and DTM driver Heinz-Harald Frentzen (44, Neuss/Callaway Competition) was also a sought after interview for the race in the Netherlands. At a media-dinner on Thursday evening, the Callaway driver took answers from Dutch media representatives ahead of the debut of the "League of Super Sports Cars" at the dune circuit.

Bad luck: A week to forget in the life of Audi boss Peter Mamerow (Mamerow Racing). Last Saturday the former ADAC GT Masters driver injured his foot in a pit lane incident at the Nürburgring. After an accident for the Mamerow Audi R8 in Qualifying on Saturday, the team from the Ruhr had to head home early.