Porsche success after cliff-hanger finale in the Ardennes 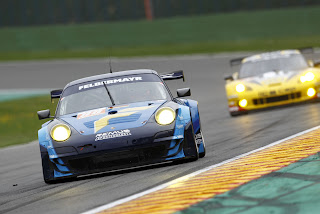 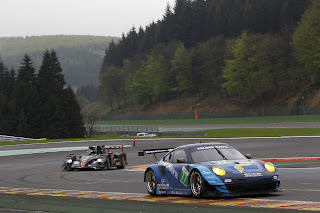 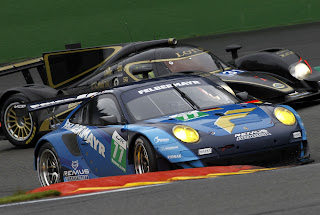 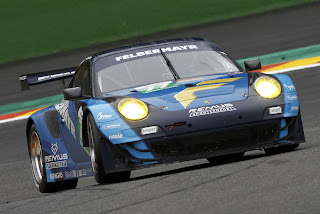 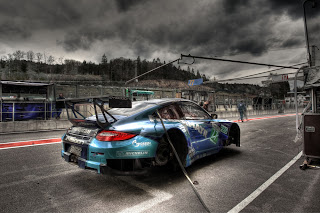 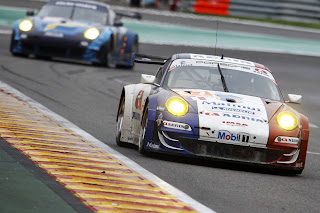 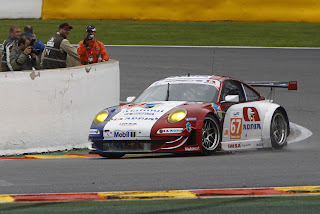 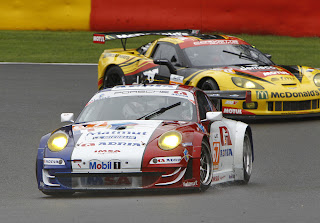 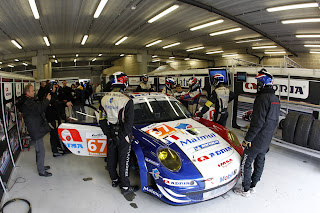 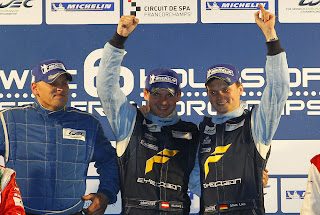 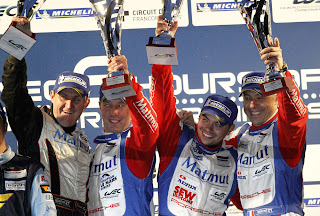 
Porsche success after cliff-hanger finale in the Ardennes

Stuttgart. A successful dress rehearsal for the 24 Hours of Le Mans: In a nerve-racking cliff-hanger finale, Porsche works drivers Marc Lieb (Germany) and Richard Lietz (Austria) of the Felbermayr-Proton squad won the GTE Pro class at the six hour race in Spa-Francorchamps. For the new Porsche 911 GT3 RSR, it was the first win in the World Endurance Championship. Victory in the GTE Am category also went to a Porsche team: Driving for IMSA Performance Matmut, Frenchmen Nicolas Armindo, Raymond Narac and Anthony Pons crossed the finish line as class winners after 139 laps on the demanding tradition-steeped circuit in Belgium.

Spectators in the Ardennes were treated to a heart-stopping finale. The last laps at the European premiere of the new World Endurance Championship, in which Richard Lietz pulled out all stops to defend his narrow lead over a Ferrari, were full of drama and excitement. With an amazing performance, the Porsche works driver held off his pursuers to finally sweep over the finish line first in class with a mere six-tenths of a second advantage. For the Austrian and his works driver colleague Marc Lieb, who started the race on a wet track and snatched the lead after the first hour, this marked their first victory in the new long distance championship after claiming second at the season-opener in Sebring.

“The last laps were a real test. There was a lot of traffic on the circuit and my tyres had already done two stints. When you’re really pushing you can’t be mindful of the tyres as well. At the end I was counting every lap,” said Richard Lietz. “We could of course have done without the two caution phases, they cost us a lot of time. Without them we would have reached the flag with a little more breathing space. We haven’t won in quite a while so it was high time. This victory is important for Porsche, for us and of course for our team. Our squad did a perfect job today.”

It was also a victory for the strategists. Although the track was partly very wet after heavy rainfall, the team sent Marc Lieb out on the drying circuit with hard rain tyres. This decision turned up trumps. “Obviously there is always an inherent risk, but this time it worked perfectly,” said Marc Lieb. “The fact that we changed to slicks very early on before all the others also tipped the scales in our favour. This won us a great deal of time over our opponents and allowed us to build up a comfortable lead in the first two hours of racing that eventually yielded us victory.”

The Porsche teams celebrated a double victory in the GTE Am class. Frenchmen Nicolas Armindo, Raymond Narac and Anthony Pons driving for IMSA Performance Matmut secured victory. The team, who are concentrating on the European Le Mans Series this season, took up the race as guest starters and are therefore not eligible to earn points. At the wheel of the second Porsche 911 GT3 RSR fielded by Felbermayr-Proton, team owner Christian Ried (Germany) and his Italian teammates Gianluca Roda and Paolo Ruberti, the winners of the season-opener, clinched second place. For this, they collected full points and further extended their lead in the Team Trophy.

“That was a fantastic race and an excellent preparation for Le Mans,” said Christian Ried. The Porsche Cup winner Gianluca Roda added, “The season has started brilliantly for us. Now comes Le Mans, the most important race of the year. We’ll be concentrating totally on this now.”

The Le Mans 24 Hours takes place on 16/17 June as the third round of the World Endurance Championship.

The World Endurance Championship
Sports prototypes and GT vehicles race in the new World Endurance Championship. They are divided into four classes that start together but are classified separately:
LMGTE Pro class: This class is reserved for slightly modified standard sports cars with 440 to 500 hp and a minimum weight of 1,245 kilograms (e.g. Porsche 911 GT3 RSR).
LMGTE Am class: Like the LMGTE Pro, but the regulations stipulate that only last year’s cars are eligible and there must be no more than one professional driver per vehicle.
LMP1 class: Sports prototypes with up to 550 hp and a minimum weight of 900 kilograms.
LMP2 class: Sports prototypes with around 440 hp and a 900 kilogram minimum weight.