Audi is strongest brand on the five front rows 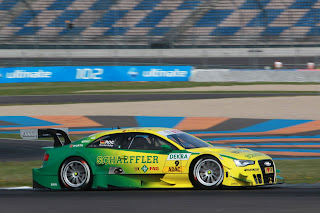 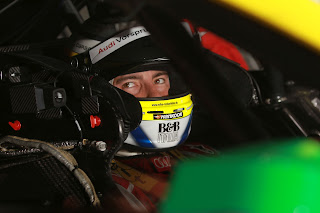 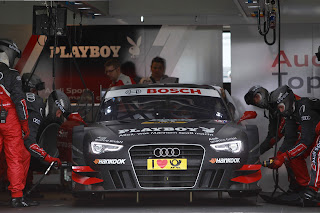 Audi is strongest brand on the five front rows

• Five Audi A5 DTM cars in the top ten in qualifying at the Lausitzring
• Mike Rockenfeller is best Audi driver on grid position four
• 1,100 Audi mechanics are keeping their fingers crossed on Sunday

Ingolstadt/Klettwitz, May 5, 2012 – Title defender Audi showed a solid team
performance in qualifying for the second DTM race of the 2012 DTM season at the
Lausitzring. With five A5 DTM cars in the top ten, Audi is the strongest brand on
the five front rows of the grid.
Qualifying at Lausitz confirmed the picture that had already become apparent at the
Hockenheim season opener a week ago. All three manufacturers are competing on
an equal footing in the 2012 DTM; the time gaps are minimal and only minute
details are decisive. And as at Hockenheim, vehicles from all three brands are again
on the two front rows.
The quickest Audi driver in qualifying was Mike Rockenfeller in the Schaeffler Audi
A5 DTM of Audi Sport Team Phoenix who had to skip the race at the Lausitzring last
year due to his serious accident at the Le Mans 24 Hours. “Rocky” was the quickest in
Q1, sixth in Q2 and second in Q2, and fourth in Q4.

“Grid position four is basically not a poor result,” commented Rockenfeller. “But I’d
certainly thought that more was possible in Q4. The first sector wasn’t very good,
that’s when I was struggling a bit with the tires. I think I squeezed the maximum
out of it nonetheless because in the free practice sessions we fully concentrated on
the set-up for the race. We’ve got a good starting base for tomorrow.”
The second-best Audi racer in qualifying was again Edordo Mortara who in his
Playboy Audi A5 DTM from Audi Sport Team Rosberg barely missed Q4 by 62
thousandths of a second. The Italian is starting into the race on Sunday from
position five.
Mattias Ekström as the best driver of Audi Sport Team Abt Sportsline secured
position eight on the grid in his Red Bull Audi A5 DTM. The Swede, who is currently
the best Audi driver in the overall standings, made two tiny mistakes in Q3 that
ultimately cost the crucial time.

The fifth row is shared by Miguel Molina (Red Bull Audi A5 DTM) and youngster
Adrien Tambay (Audi ultra A5 DTM), who at the second DTM qualifying event in his
young career reached Q3 for the first time.
Filipe Albuquerque (TV Movie Audi A5 DTM) missed Q3 by just 32 thousandths of a
second. The Portuguese is on position eleven. Timo Scheider (AUTO TEST Audi A5
DTM) touched a curb in Q3 and damaged his A5 DTM in the process. The two-time
DTM Champion will start from position twelve. Rahel Frey (E-POSTBRIEF Audi A5
DTM) will enter the race from position 22.

“This was a similarly thrilling qualifying session as the one a week ago,” analyzed
Head of Audi Motorsport Dr. Wolfgang Ullrich. “The three manufacturers are so
close together that you can’t afford to make the slightest mistake. We could see
that again today. With five vehicles, Audi has the strongest representation on the
five front rows of the grid. At Hockenheim, we had pole but weren’t strong enough
in the race. I’m hoping for us to be able to turn that around here. In any event, it’ll
be very thrilling tomorrow.”

For the race on Sunday (live on “Das Erste” starting at 13:45 – local time) a similarly
impressive crowd as at Hockenheim a week ago is expected – including around 1,100
mechanics from Audi operations in the Region East who will be avidly keeping their
fingers crossed for the Audi racers and can be recognized by their red Audi caps.
Audi Sport.