Audi is traveling to British DTM round with fondest memories 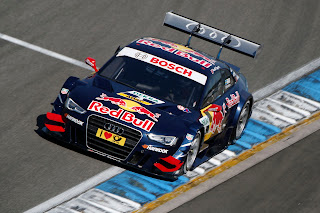 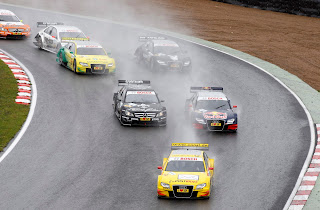 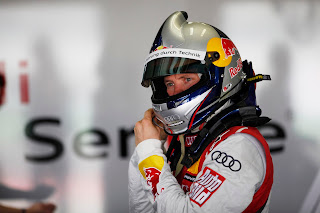 Audi is traveling to British DTM round with fondest memories

Ingolstadt/Brands Hatch, May 11, 2012 - DTM events are following each other in rapid succession. Only 14 days after the race at the Lausitzring the third round of the popular touring car racing series at Brands Hatch (Great Britain) on May 20 is on the calendar. After a third and a fifth place Audi’s DTM squad is leaving no stone unturned to be in contention for victory on the shortest track of the year.

Nobody at Audi Sport in Ingolstadt and Neckarsulm, and at the three Audi factory teams in Kempten, Meuspath and Neustadt had the chance to take a deep breath. Several gigabytes of data were read and analyzed, and the race cars dismantled and prepared again before they were sent on their way to England on Tuesday. In addition, the agenda included track tests aimed at making better use of the potential of the new Audi A5 DTM and the Hankook tires - particularly in race trim.

After Hockenheim and the Lausitzring, Brands Hatch is another race track on the calendar with very special characteristics. The so-called "Indy Circuit" is merely 1.929 kilometers long and has clearly more right-hand than left-hand turns. 98 laps have to be completed in the race, challenging the teams to make all the right strategic decisions. At no other circuit proper timing of the two mandatory pit stops is as important as it is at Brands Hatch.

Audi won the British DTM round in 2006, 2008 and 2011, and even took the entire podium last year. All eight Audi drivers have fond memories of the track and are looking forward to the race - spearheaded by Mattias Ekström, who won the DTM’s debut race at Brands Hatch in 2006 and shielded Martin Tomczyk to the rear on Tomczyk’s important victory on the way toward the champion’s title.

Timo Scheider’s personal Brands Hatch track record reflects a victory (2008) and a second place as well. Mike Rockenfeller clinched his first pole position in the DTM at Brands Hatch last year, and Edoardo Mortara his first podium. In 2010, Miguel Molina achieved the best result in his DTM debut season at Brands Hatch. And Filipe Albuquerque, Rahel Frey and Adrien Tambay like the circuit in the English county of Kent too.

Mattias Ekström is traveling to the United Kingdom as the Audi driver with the highest points score. The Swede was also responsible for the first pole position and first podium of the Audi A5 DTM on its debut at Hockenheim in late April. At the Lausitzring he finished in fifth place after having started from position eight on the grid.

As early as on Saturday the event at Brands Hatch will be a special thriller, as merely two hours separate free practice and qualifying this time. Plus the time gaps on track should be minimal. Experts even expect to see the tightest field in DTM history.

ARD will broadcast the qualifying session on Saturday (May 19) live starting at 13:35 on "Das Erste" and the race on Sunday (May 20) as usual at 13:45. Due to the live TV broadcast to Germany the race start has been moved forward to 13:00, local time (14:00 CEST). 1.28 million ARD viewers watched the Hockenheim season opener live and 1.66 million the race at the Lausitzring.

Dr. Wolfgang Ullrich (Head of Audi Motorsport): "Our aim is to get back - preferably as early as at Brands Hatch - to where we were in all the years, which is being in contention for victory. That’s why between the Lausitzring and Brands Hatch we’ve got two intensive weeks of hard work that we’re making optimum use of. Clearly, at Brands Hatch, due to the short track, the field will be even closer together than at the first two races."

Hans-Jürgen Abt (Team Director Audi Sport Team Abt Sportsline): "After three consecutive weekends we finally had the chance to go home and to carefully analyze the whole situation. We made a step in the race at the Lausitzring - and we want to continue this way at Brands Hatch. Team performance was very good at the first two races, the squad made no mistakes. That’s a basis to build on. We continue to be motivated and will try everything we can to take Audi back to the very front again."

Ernst Moser (Team Director Audi Sport Team Phoenix): "Last year we won as a team at Brands Hatch and ‘Rocky’ clinched pole. We’ve definitely got the clear aim of continuing where we left off in in 2011. Brands Hatch is a special track. 98 laps - that means our task will be to never hit traffic in the race. But before anything else we’ve got to try to be at the very front of the grid."

Arno Zensen (Team Director Audi Sport Team Rosberg): "I’ve got fond memories of last year when Edo (Mortara) was on podium. And that’s exactly where we want to be again. We’re working hard to achieve this. We’ve now had the chance to practice pit stops. Before the season we couldn’t do that because we had neither the material nor the time for practicing. We’ll try and make further improvements and are looking ahead."

Filipe Albuquerque (26/P), TV Movie Audi A5 DTM #22 (Audi Sport Team Rosberg)
• Has scored points in both 2012 DTM races
• Barely missed the top ten at Brands Hatch last year
"Brands Hatch is a very small track, so that’ll definitely be interesting this year. Everyone will probably be within two tenths of a second. Especially in qualifying you’ll probably need a bit of luck too. Also, finding a free lap will be anything but easy with 22 cars on a little less than two kilometers. In any event, it’ll be interesting for the spectators to watch. And I’m hoping that the short break will help us get a better understanding of the car and the tires."

Mattias Ekström (33/S), Red Bull Audi A5 DTM #3 (Audi Sport Team Abt Sportsline)
• Won the DTM race at Brands Hatch in 2006
• Was on podium last year as the runner-up
"We analyzed the first two races and now we’ve got to try and find the thread again that we lost somewhere along the way. You can find something again as quickly as you can lose it. So finding is the task now. In general, Brands Hatch is a fun track that I’m looking forward to."

Rahel Frey (26/CH), E-POSTBRIEF Audi A5 DTM #17 (Audi Sport Team Abt)
• Set the third-fastest lap of all Audi drivers at the Lausitzring
• Retired after an excursion at Brands Hatch last year
"The race at the Lausitzring went well for me and we want to continue this way at Brands Hatch. Together with the team I analyzed what it is that we can work on in order to further improve. I’m going to try and put this on track at Brands Hatch where I drove good lap times last year - even though the race ended in the gravel for me."

Miguel Molina (23/E), Red Bull Audi A5 DTM #10 (Audi Sport Team Phoenix)
• Clinched fourth place at Brands Hatch in 2010 in his first DTM season
• Is one of five Audi drivers who have scored points so far in 2012
"I always feel very comfortable at Brands Hatch. That’s where, in fourth place, I achieved my best result in my first DTM season. I always travel to this track with a good feeling. After the race at the Lausitzring we had almost two weeks to analyze everything and to prepare for the next race. I’m confident that we’ll be able to finish with a good result."

Edoardo Mortara (25/I/F), Playboy Audi A5 DTM #21 (Audi Sport Team Rosberg)
• Achieved his first podium finish at Brands Hatch last year
• Has always started from the top three rows in 2012 so far
"I’m happy to be returning to Brands Hatch where I clinched my first podium result in the DTM last year. Even though the past race was a difficult one for us I’ve been pretty happy with my personal performance so far this year. I’m hoping that at Brands Hatch we can make another step forward and will look better in the race than we did at the Lausitzring."

Mike Rockenfeller (28/D), Schaeffler Audi A5 DTM #9 (Audi Sport Team Phoenix)
• Clinched the pole position at Brands Hatch last year
• Was the quickest Audi driver in qualifying at the Lausitzring
"I’m really excited about going to Brands Hatch - especially following such a poor ending of the race at the Lausitzring after we’d actually had a good weekend until the race. At Brands Hatch, I was on P1 last year. I’d like to manage this again and would obviously love to win the first race for Audi this year."

Timo Scheider (33/D), AUTO TEST Audi A5 DTM #4 (Audi Sport Team Abt Sportsline)
• Won at Brands Hatch in 2008 and took second place in 2009
• Shone at the Lausitzring with a recovery from twelfth to sixth place
"We’re going to put our heads together even more intensively. At the Lausitzring we had a positive trend in the race. We tried out some things there which gave us a bit of performance. But naturally that’s not enough yet by a long shot. We’ve got to work hard in order to manage another step."

Adrien Tambay (F/21), Audi ultra A5 DTM #18 (Audi Sport Team Abt)
• Has been leaving a strong impression so far in his debut year
• Most recently achieved grid position ten at the Lausitzring
"I’m looking forward to Brands Hatch. I know the circuit from Formula 3. It has a very special atmosphere. Qualifying at the Lausitzring went well for me, but the race didn’t. We analyzed why that was the case and now I’m really eager to contest my third DTM race."

All Brands Hatch winners since 2006

By taking his third victory of the season Martin Tomczyk re-captured the lead of the standings for Audi in a wet race at Brands Hatch last year. Mattias Ekström and Edoardo Mortara completed an Audi one-two-three triumph in difficult conditions. This marked the first time for racers from all three Audi teams to mount the podium together.

Mattias Ekström about Brands Hatch: "A classic English race track. It’s narrow and bumpy in some places. You can’t afford to make any mistakes because there are hardly any run-off areas. Personally, I’ve had good and bad experiences there. Like the Norisring, Brands Hatch has only a few turns. But they are very special, particularly turn one. The circuit - which, by the way, is the shortest one on the DTM calendar - offers only few opportunities for overtaking. Although there’s a lot of talk about the typical English weather we’ve only had rain there once with the DTM. Brands Hatch normally has good grip but the organizers always made a few minor modifications in recent years so that we often encountered some small surprises in the first practice session."