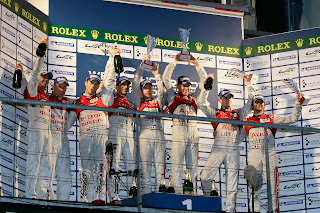 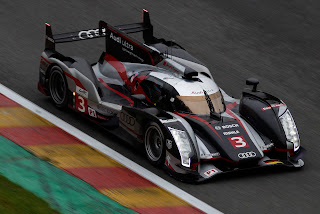 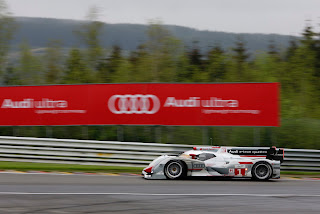 Ingolstadt/Spa, May 5, 2012 – Audi delivered a thrilling premiere of two new
vehicle models: Romain Dumas/Loïc Duval/Marc Gené won the Spa 6 Hours, the
second round of the FIA World Endurance Championship WEC, in an open battle
of the vehicle concepts. Crossing the finish line behind the Audi R18 ultra of the
trio were last year’s Le Mans winners Marcel Fässler/André Lotterer/Benoît
Tréluyer. They had dominated the race in the early phase with the Audi R18 e-tron
quattro, the first diesel hybrid sports car in history. In the end, they had to admit
defeat though. The other two Audi driver teams completed the perfect 1-2-3-4
victory of the brand.
The successful racing debut of the Audi R18 ultra and the R18 e-tron quattro
marked an important milestone for Audi. In their first competition, the two vehicle
concepts, in addition to their reliability, demonstrated a very balanced overall
performance. The sporting results confirmed a basic agenda set by Audi – the
decision in favor of two vehicle concepts – right on the cars’ first race. Major
technical advantages of individual concepts can be offset by the LMP sports
prototype regulations in a way that allows a thrilling competition to unfold – even
though this question will have to be answered anew on each of the race tracks under
highly different general conditions.
On the wet track at Spa-Francorchamps the two hybrid sports cars initially
dominated the action. André Lotterer in the number “1” R18 e-tron quattro took the
lead from Tom Kristensen in the number “2” hybrid sister car after only a few laps.
Lotterer gained an almost one-minute advantage over the best conventionally
powered Audi R18 ultra, car number “3” driven by Marc Gené. At the end of the
race’s first hour, two factors caused a preliminary decision. On a drying track, Marc
Gené at the first pit stop was the only Audi to switch to slicks while the other drivers
received intermediates. Consequently, Audi’s new Spanish signing was up to four
seconds quicker than the rest on the 7.004-kilometer track. At the same time, the
number “2” Audi R18 e-tron quattro was forced to have the hood exchanged due to
a defect on the front lighting system. Tom Kristensen lost almost a minute in the
process.
Thanks to the bold tire choice Marc Gené and Loïc Duval converted a gap of around
one minute into an advantage during the course of 37 race laps. On lap 63, Duval
took the lead – and car number “3” would not relinquish it again through to the
finish. Gené, who is standing in for the injured Timo Bernhard as a reserve driver,
thus managed a brilliant debut at Audi. After his successes in 2008 and 2011, the
Spaniard is celebrating his third sports car victory at Spa.
Following behind Marcel Fässler/André Lotterer/Benoît Tréluyer in second place
were Marco Bonanomi/Oliver Jarvis in the second Audi R18 ultra. Both finished their
sports car debut in the Audi factory team with a podium place.
Capello/Kristensen/McNish had to settle for an unfortunate fourth place but are not
leaving Spa empty-handed. Allan McNish achieved the best time in qualifying on
Friday and in the World Endurance Championship standings the Sebring winners are
now ranking as the runners-up with 38 points. The new front runners are Romain
Dumas and Loïc Duval with 43 points.
With the 1-2-3-4 victory at Spa, four reliably working race cars, a solid driver line-up
and an efficiently operating Audi Sport Team Joest, Audi managed a successful dress
rehearsal for the Le Mans 24 Hours. The endurance classic will be held for the 80th
time on June 16 and 17. Audi is aiming for its eleventh overall victory there.
Quotes after the race
Dieter Gass (Head of Racing Commitments): “We’re very happy with this result. On
the whole, it couldn’t have gone any better, even though the situation became a bit
unpredictable toward the end. We suffered punctures on two cars because obviously
after the numerous accidents some sharp debris was on the track. Technically, the
cars ran without any problems throughout the six hours. That was an important step
in our preparation for Le Mans. I want to thank the squad after a very tough
preparation period. This is the nicest reward one could wish for.”

Ralf Jüttner (Technical Director Audi Sport Team Joest): “We celebrated a 1-2-3-4
victory and learned a lot with the four cars and different tire strategies. Our four
cars finished without any technical problems. Audi’s decision to opt for two
concepts proved to be right. The R18 e-tron quattro is a strong car but the R18
ultra, too, has certain advantages. But there’ll be quite a few more things coming
with the R18 e-tron quattro in the future. This was the first race with the hybrid car
that ultimately finished in second and fourth place. ‘Well done’ to the winners
Romain Dumas, Loïc Duval and Marc Gené and to Oliver Jarvis and Marco Bonanomi
too, who drove their first races without making the slightest mistake. It was a good
dress rehearsal for Le Mans. I want to thank the squad in these tough and very busy
days.”
Romain Dumas (Audi R18 ultra #3): “We had a perfect race. My team-mates and
our squad showed a brilliant performance. Our strategy was right on the mark and
our fuel consumption was low. That paid off. That way, we increased our advantage.
The tires were very good, that’s why I opted not to change tires in the end. That was
another reason for our success.”
Loïc Duval (Audi R18 ultra #3): “Today, we experienced a surprise. This was only my
second race with Audi but already my first victory. As always, there wasn’t a single
problem when I’m sitting in an Audi. The conditions were very difficult in the
beginning but the car was fantastic. We had no problems whatsoever. It’s a nice
result for Audi to finish on positions one, two, three and four. I’m very happy to be
on the very top of the podium.”
Marc Gené (Audi R18 ultra #3): “That was incredible. More was not possible today.
Life is full of surprises. On my debut with Audi I clinched my third personal victory at
Spa. It was an honest win in difficult conditions. As a driver team, we were well
matched; the engineers, the team and the car were perfect. I never believed in
taking victory. My goal had been a podium finish.”
Marcel Fässler (Audi R18 e-tron quattro #1): “Sincere congratulations to Audi and
car number “3” on taking victory. They did a perfect job and made their decisions at
exactly the right moment. We had the pace for winning. A key point in time was a
safety car period that separated us from the cars in front and caused us to lose
ground from a 15 to a 50 second gap. It was difficult to make up such a gap. After
my pit stop a wheel locked once when I hit the brakes. Afterward there were heavy
vibrations and I was no longer in contention for victory. I secured second place in
order to score important points for the World Championship. To avoid a puncture I
had new wheels fitted just to be on the safe side.”

André Lotterer (Audi R18 e-tron quattro #1): “A fantastic race for Audi with a 1-2-
3-4 victory. When I was sitting in the car at the beginning of the race in the rain I
particularly enjoyed the technology of the R18 e-tron quattro. Even though the
technology is brand new it functioned superbly. Unfortunately, we didn’t keep the
lead but we’re still in a learning phase. On the whole, though, it was a nice
beginning before the really big challenge, the Le Mans 24 Hours.”
Benoît Tréluyer (Audi R18 e-tron quattro #1): “Second place on the debut of the
hybrid vehicle is a good result. The car was running absolutely perfectly – a good
sign for the future. Our Audi R18 e-tron quattro was really very good in the rain.
When track was drying off and I was in the cockpit the car developed a tendency to
understeer. That cost us a lot of time in the battle with car number “3.” But we’re
only at the beginning with this new concept.”
Marco Bonanomi (Audi R18 ultra #4): “It was really a great race. This was my first
one in an Audi sports prototype, so I can’t expect any more than this. Yesterday, we
were second in qualifying and today we finished in third place. The race was very
difficult. In the beginning it was pretty wet and then the tarmac dried off more and
more. Oliver and I were very quick in all conditions. The pit crew did tremendous
stops. Unfortunately, we struck by misfortune during the first safety car period and
lost one lap at the red lights at the end of the pit lane.”
Oliver Jarvis (Audi R18 ultra #4): “A great day. The most important thing was to
not make any mistakes and to complete as many kilometers as possible. We may be
inexperienced but the pace was there. Now the wish remains to finish on the podium
at Le Mans as well – maybe we’ll even move up a bit more.”
Dindo Capello (Audi R18 e-tron quattro #2): “A tremendous result on the whole.
For the first time, Audi occupied the top four places. Sincere congratulations to the
winners, but I’m hoping that it won’t be too long before an Audi R18 e-tron quattro
wins for the first time. Audi did a superb job of competing here with four cars and
clinching a 1-2-3-4 victory. In our car, my task was to drive three stints with the tires
to test them for Le Mans. But after my last stop the tires heavily degraded and I had
increasingly heavy understeer – which caused me to lose more and more speed. This
phenomenon increased further in traffic. When I was driving alone it was okay. I
think that the cause is not to be found in the tires but in our set-up.”
Tom Kristensen (Audi R18 e-tron quattro #2): “This was an outstanding race for
Audi with four new cars. Unfortunately, it didn’t go optimally for our driver team.

But particularly in the rain our performance was remarkable. Things were going well
on a dry track too but a few minor things caused us to lose ground. We had to
change the front hood because the left headlight wasn’t working. Then we received
a stop-and-go penalty. Our tire strategy was relatively conservative. But on the way
to the finish we gathered a lot of valuable data and findings. ‘Well done’ to the
three cars in front of us on the podium. Coming up next, in June, will be the pre-test
for the Le Mans 24 Hours. We’ve been looking forward to the big race two weeks
later for a long time.”
Allan McNish (Audi R18 e-tron quattro #2): “A very sincere ‘well done’ to our
victorious team-mates. They were very good today. Spa is always unpredictable and
so the weather today was critical again. It was also clear that we’re experiencing a
learning curve with the R18 e-tron quattro and at the moment we’re just at the
beginning of it. We’ve still got to improve balance and thus the consistency of the
tires. Two or three minor changes in the race didn’t help us either. But that’s the
way it goes sometimes. Today was totally different from yesterday when we
managed to set the fastest time in qualifying.”