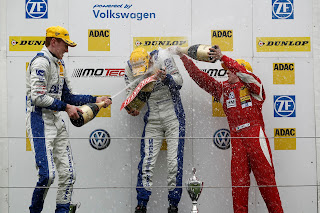 
Zandvoort - Marvin Kirchhöfer claimed victory in the opening race of the Formel ADAC weekend at Zandvoort after leading the field from start to finish, making it the second triumph of the season for the current championship leader. "The team did a fantastic job", said Kirchhöfer. "Our speed was really good, and everything worked out exactly as I hoped it would."

The 18-year-old ADAC Sports Foundation protégé who drives for Team Lotus beat off the challenge from Luca Caspari (16, Meerbusch, Mücke Motorsport) over the 15-lap distance of this debut race for the junior series in the Dutch dunescape. The Mücke man held on to his P2 grid slot to cross the finish line as runner-up.

The third podium spot in this first of three races around the 'Rollercoaster by the North Sea' went to Gustav Malja (16, SWE, Neuhauser Racing) who had started from fifth. This meant that the Top Three were from three different teams. Kuba Dalewski (16, POL, Lotus), the first Polish contestant in Formel ADAC, advanced two positions in the race to finish fourth ahead of team-mate Jeffrey Schmidt (18, SUI, Lotus) who likewise improved by two places from seventh on the grid.

Roy Nissany (17, ISR, Mücke Motorsport) advanced five positions up the field to cross the line in P6. He was followed by Jason Kremer (17, Bonn, Mücke Motorsport) in seventh; the Mücke driver had set his hopes higher, but lost out in a couple of thrilling encounters with Dalewski and Schmidt.

The biggest loser at the start was Thomas Jäger (17, AUT, Neuhauser Racing). Kremer spun the Austrian round on the entrance to the first corner. Jäger then hit a barrier, which brought his race to an early end. Meanwhile, Kremer continued on his way tucking himself into fourth place behind the leading trio of Kirchhöfer, Caspari and Malja. Number three man Malja had moved up two places from fifth on the grid. Kim-Alexander Giersiepen went out of the race on the first lap after a collision with Sebastian Balthasar.

The first of the Formel ADAC races around the 'Circuit amongst the Dunes' at Zandvoort was contested by a reduced starting field: Beitske Visser (17, NED, Lotus) had to miss out after an accident in qualifying. Likewise Felix Wieland (15, Rosenheim, HS Engineering) whose car was still under repair after a crash in the same session. Hendrik Grapp (18, Berlin, ADAC Berlin-Brandenburg e.V.), who was due to start from sixth, had to withdraw when a technical fault in his vehicle was discovered just before the race was about to commence.


Comments from the Top 3 drivers

Marvin Kirchhöfer, Winner:
"I'm hugely pleased about my second victory of the season. The team did a fantastic job. Our speed was really good, and everything worked out exactly as I hoped it would. I managed to put some distance between myself and the chasing pack not long after the start. Then I was able to ease back and save the tyres for the next race."

Luca Caspari, Second:
"I had a great race and am very satisfied with second place. I had some initial problems getting tyres up to temperature, which is also why Marvin was able to draw away in the lead. Gustav was closing on me by the middle of the race, but I stayed in front. However, I then had to push quite a bit towards the end of the race, which was not good for the tyres."

Gustav Malja, Third:
"I was one of the beneficiaries of the collision at the start and quickly gained ground on the leaders. As the race went on, I was closing on Luca Caspari. But then I had to think strategically, because there are two more races this weekend, and the Zandvoort track is well known for eating up your tyres."