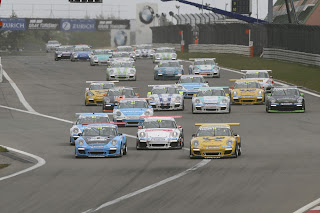 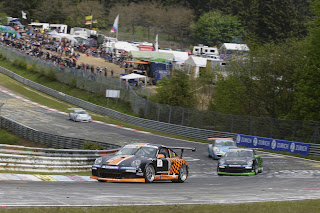 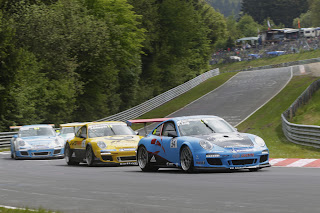 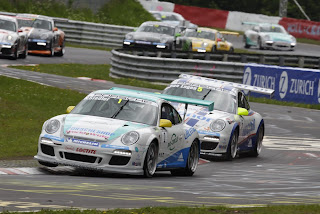 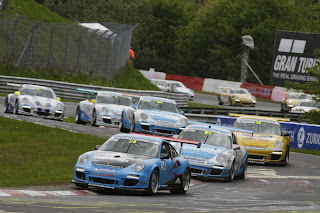 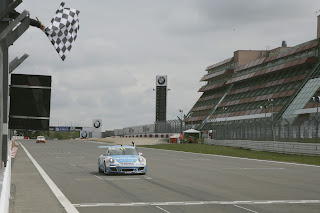 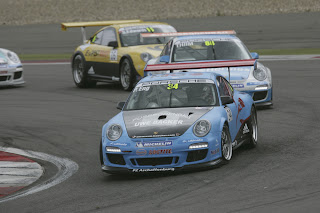 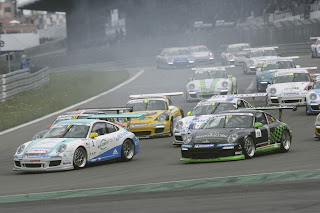 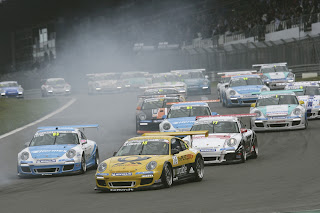 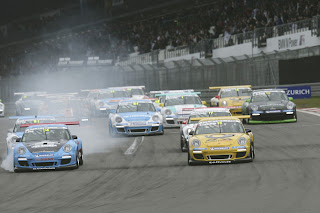 Porsche Carrera Cup Deutschland, round 5 on the Nürburgring

Stuttgart. Fifth round, first victory: Kévin Estre celebrated his maiden win in Germany’s fastest one-make series in an impressive manner. With an 8.784-second advantage, the Frenchman driving for Hermes Attempto Racing crossed the finish line first at the season highlight on the Nürburgring-Nordschleife. Second went to two-time winner this season Sean Edwards (Great Britain, Team Deutsche Post by tolimit) ahead of his teammate René Rast (Germany).

Estre did not come to the long-standing all-Porsche series as a dark horse. The 23-year-old is not only the reigning champion of the French Carrera Cup, but he underlined his extraordinary driving talent last year as a newcomer to the international Porsche Mobil1 Supercup and took home the Rookie of the Year title. Unsurprisingly, he has claimed second place at the season-opener at Sunday’s race in Hockenheim and in the Lausitz he planted his blue and white Porsche on pole position. On the 25.378 kilometre combination of the Grand Prix circuit and the legendary Nordschleife, Este headed into the race from fifth position. With a cracking start followed by a bold overtaking manoeuvre past pole-setter Philipp Eng (Austria, MRS GT-Racing), Estre settled in at the front of the field even before the 24 pilots had reached the Nordschleife. The rookie then proceeded to drive a faultless race to take the chequered flag.

Behind the Frenchman, round five of the season delivered dramatic fights and gripping overtaking manoeuvres. Early on in the race, second-placed Sean Edwards had fallen back to fourth. First he didn’t find a way around Philipp Eng, then Nicki Thiim (Denmark, Hermes Attempto Racing) also got past the Briton. Only towards mid-race could the reigning vice-champion Edwards squeeze past Eng, but by that time Estre and Thiim were long gone. Near the flag, second place practically fell into Edwards’s lap. Nicki Thiim made a misjudgement when attempting to lap a Renault Clio. The cars touched, Thiim went off the track with two wheels and damaged a tyre.

Profiting from Thiim’s misfortune was seasoned campaigner René Rast. The winner from last year took up the race from only tenth place, but utilised his vast experience over the course of the race. Particularly striking, in the penultimate race lap, the double Supercup champion overtook three competitors entering and exiting the finish straight. The experienced Norbert Siedler (Austria, Konrad Motorsport), who secured pole position and second in the race here last year, brought home his best result of far of this season with fourth place. Jaap van Lagen (Netherlands, FE Racing by Land-Motorsport) underlined his consistent form with another top-five result.

On sixth place came a somewhat disappointed Philipp Eng. At just his sixth Carrera Cup race and his first on the tricky Nordschleife, the surprise pole-sitter from Austria had to learn the hard way. Seventh went to the ex-Formula 1 test driver Michael Ammermüller (Germany, SWITCH IT Lechner Racing) ahead of eighth-placed Nicki Thiim.

Achieving ninth position, Porsche Junior Michael Christensen gave a fine performance of his driving talent and ability to learn. Driving for Konrad Motorsport, the Dane was just 16th in the starting order, but quickly gained several places. Christensen had also overtaken the second Porsche Junior Klaus Bachler (Team Deutsche Post by tolimit) when the Austrian tried to reclaim his position. Their two cars touched, Bachler slid spectacularly onto the grass. Although he managed to rejoin the race, his 911 lost the front lip in the collision. At the flag he secured 14th – and earned some more crucial points.

Kévin Estre (winner): “The race was really tough. After a good start I had almost moved into first place by the second corner, but Philipp Eng closed the door. I knew if I wanted to win this race then I had to get past him straight away and build a gap between me and the others. Overtaking Eng was tough but fair. Then I pushed hard. Later, Nicki caught up and at the flag he was almost on me. The last couple of kilometres were crazy, because I had to overtake around 20 Clios and went totally into the greens. It’s fantastic to have won my first Carrera Cup race of all places on the Nordschleife. I’m absolutely over the moon.”

Sean Edwards (second): “My start was good, but Philipp Eng had braked too late which forced me into evasive action. On the Nordschleife he then held us up a little. But finally we managed to get past. My car was good enough to win the race but I had a little bad luck with the traffic. Still, I’m happy with second place and more points towards the championship. And anyway, racing on the Nordschleife is always a great pleasure.”

René Rast (third): “It couldn’t have gone better for me. From tenth at the start to the podium and retain the points’ lead – that’s wonderful. To be honest, I hadn’t expected that. I love the Nordschleife. And the many overtaking manoeuvres were great fun.”

Michael Christensen (Porsche Junior, ninth): “For me the race was very interesting, a fantastic experience. I already love driving on this circuit and enjoyed every lap. You’re often so close to going off the track – it’s really a very big challenge. I think I have learned a great deal and I know the circuit better.”

Klaus Bachler (Porsche Junior, 14th): “At the beginning of the second lap I had a collision with Michael and lost the front lip of my Porsche. Without downforce on the front axle the handling became very difficult. Particularly in places like Flugplatz or Fuchsröhre the front of the car became very light and I had trouble steering. Luckily I was able to bring the 911 home safely and even earned some points.”

Preview to races 6 and 7 in Spielberg

On the popularity scale of race drivers, the A1-Ring in Austria is right up there. After a seven-year break, the circuit once again opened its doors last year under the new name “Red Bull Ring”. Pilots can look forward to races 6 and 7 on 2/3 June on the 4.326 kilometre rollercoaster track in Austria’s Styria region. The Ring is regarded as a challenge for drivers.