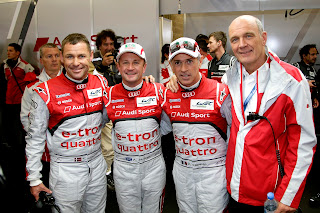 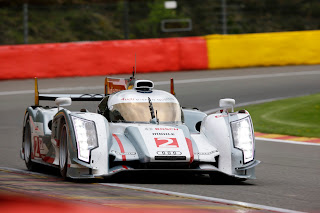 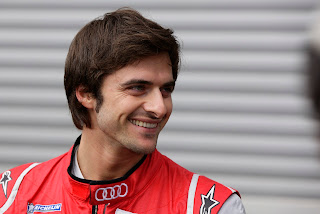 Ingolstadt/Spa, May 4, 2012 – Premiere in endurance racing: Audi is again
making technology history in motorsport, as a diesel hybrid vehicle is on the top
spot of the grid of a sports car race for the first time ever. At round two of the new
FIA World Endurance Championship (WEC) at Spa, Belgium, Audi will be starting
into the race on Saturday (14:30, May 5) with four cars from the front two rows.
Even before the start of the Spa 6 Hours Audi has every reason to be pleased, as the
team successfully managed a two-fold premiere. Both the new hybrid model Audi
R18 e-tron quattro and its sister model, the Audi R18 ultra, that is conventionally
powered by a V6 TDI engine celebrated an impeccable debut. The two vehicle
models fought an open battle for the grid positions in dry conditions. Allan McNish
in the hybrid car designated as number “2” set the pace straight from the beginning.
He initially drove a lap around the 7.004-kilometer race track in the Ardennes in 2m
01.967s. The Scotsman then improved his own time by more than three tenths of a
second to 2m 01.579s. As on the debut of a TDI diesel engine in a sports car six
years ago at Sebring McNish and his team-mates Dindo Capello and Tom Kristensen
again set the first benchmark on the next milestone – hybrid technology.
Marco Bonanomi, who like Marc Gené and Oliver Jarvis is making his racing debut in
Audi’s sports car squad in Belgium, managed the leap onto the front row as well in
the Audi R18 ultra. The Italian handled the challenging track in 2m 02.093s. Marcel
Fässler in the second Audi R18 e-tron quattro achieved the third-best time. Loïc
Duval, who is driving an Audi R18 ultra, finished in fourth place. For the first time in
the 13-year history of Audi’s LMP program, Audi Sport Team Joest is fielding four
sports cars. The team based in Germany’s Odenwald region is preparing for the Le
Mans 24 Hours on June 16/17 this way. The famous endurance classic will be
contested with the same vehicle line-up.