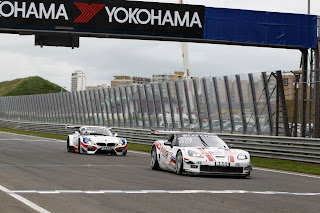 
Exciting wheel-to-wheel racing, 40 super sports cars battling it out against the backdrop of wind-swept dunes, and a result that could have gone either way right up to the end: this was the best possible advert for the ADAC GT Masters making its debut at Zandvoort. The first excursion for the 'Super Sports Car League' outside the borders of Germany ended in a thrilling contest between Corvette driver Daniel Keilwitz (22, Villingen / Callaway Competition) and local favourite Jeroen den Boer (24, NL / DB Motorsport). But on the last few laps, race leader Keilwitz kept his nerve to share with team-mate Diego Alessi (40, ITA) the honour of picking up the first ADAC GT Masters trophy for Corvette since 2009. "It was very exciting - towards the end, I could hardly bare to look at the monitor," said co-winner Alessi. Den Boer and Simon Knap (23, NL) finished as runners-up ahead of local favourite Jeroen Bleekemolen (30, Monaco / FROGREEN CO2 neutral ) who shared the remaining podium spot with Porsche 911 co-driver Robert Renauer (27, Jedenhofen)

The quickest man off the mark was Finnish driver Jesse Krohn (21 / Lambda Performance) in the Ford GT. After a phenomenal start from tenth, the Ford had advanced to second by the end of the first lap. On lap three, the 'Flying Finn' overtook pole-sitter Simon Knap and retained the lead until the pit stop. But the changeover to team-mate Nico Verdonck (26, B) took so long that the Belgian emerged from the pit lane back in sixth. Keilwitz took over the lead after excellent work from co-driver Alessi to advance the Corvette up the field in the first half of the race. The Italian thus managed to mitigate his error in free practice when, despite being the fastest man in qualifying, he was handed a ten-place grid penalty for an earlier offence in free practice.

Keilwitz did not have an easy run-in and came under severe pressure from den Boer. But the Corvette driver managed to hold off the challenge from the Dutchman to claim his first ADAC GT Masters win. "It was very tight; the BMW kept closing on all the corners, but then I kept pulling away on the straights again," said winner Keilwitz. He also praised his team-mate: "It was fantastic how Diego Alessi prepared the way for me."

Local hero Bleekemolen, making a guest appearance in the Porsche 911, also had cause for satisfaction. After good work by team-mate Robert Renauer and a perfect pit stop, the Renauer/Bleekemolen partnership took the remaining podium spot. The Ford duo of Krohn/Verdonck finished fourth ahead of Dino Lunardi (33 F) / Maxime Martin (26, B / ALPINA). The BMW ALPINA partnership drove a tactically astute race to build on their current championship lead.

The two Stuck brothers, Ferdinand (20, A) and John (25, A/Young Driver AMR)) claimed their first championship points of the 2012 season. They achieved the best result to date for the new Aston Martin V12 Vantage by coming home in sixth place. No fewer than three Mercedes-Benz SLS AMGs, driven by Sebastian Asch (25, Ammerbuch) / Maximilian Götz (26, Uffenheim), Florian Stoll (30, Rickenbach) / Daniel Dobitsch (27, A) and Dominik Baumann (19, A) / Harald Proczyk (36, A) finished behind the British muscle car (Power Coupé). The Swedish team of West Coast Racing with Fredrik Lestrup (27, S) / Martin Matzke (22, CZ) gained a place in the Top Ten of the ADAC GT Masters for the first time in a BMW Z4.

The race was already over before the lights turned green, however, for Audi R8 pair Christer Jöns (24, Ingelheim) / Christopher Mies (22, Heiligenhaus / Prosperia uhc speed). Audi driver Jöns retired with suspension damage after making contact with the BMW Z4 of Claudia Hürtgen (40, Aachen / Schubert Motorsport) on the installation lap. Hürtgen had to pit for fresh tyres, eventually finishing in P16 together with Dominik Schwager (35, Eisenhofen). Heinz-Harald Frentzen (44, Neuss / Callaway Competition) also had a spot of bad luck during the closing stages of the race whilst lying in third place. Frentzen was forced to retire ten laps before the end with a technical problem after contact with two stragglers while lapping them.


As in previous seasons, all 16 races in the FIA GT Championship are broadcast live on the free-to-air channel kabel eins. Viewers in Germany, Austria and Switzerland can tune in at 12.15pm on Saturday and Sunday. For continuous updates on completed laps and times during free practice and races, check out the Live Timing page at www.adac.de/motorsport.