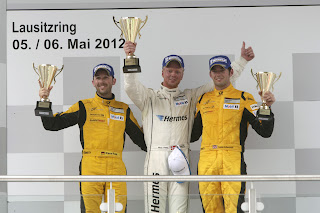 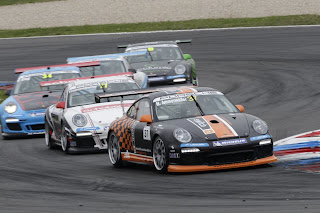 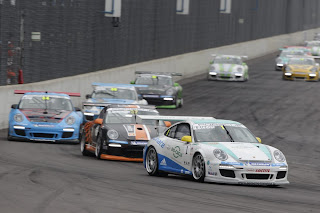 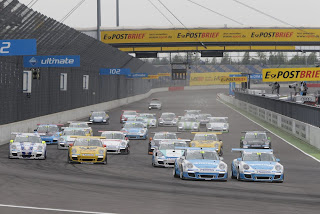 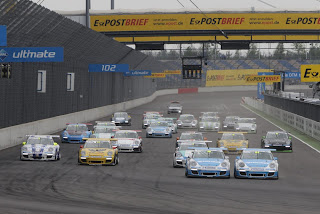 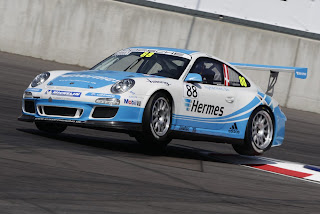 Porsche Carrera Cup Deutschland, round 3 on the Lausitzring

Stuttgart. His dream start was the key to success: Taking up race three of the Porsche Carrera Cup Deutschland from second on the grid, last year’s Lausitzring winner Nicki Thiim (Denmark, Hermes Attempto Racing) scored his first win of the season on the Lausitzring. Second went to the winner of the season-opener René Rast (Germany). For the Team Deutsche Post by tolimit – Team Pole Promotion pilot, this helped further extend his points lead in Germany’s fastest one-make race series. Sean Edwards (Great Britain, Team Deutsche Post by tolimit) saw the flag in third. The grid line up for Saturday’s 60 kilometre race was determined by the second quickest time in qualifying.

The first third of the 18-lap sprint race on the 3.478 kilometre circuit was characterised by a spirited battle between Nicki Thiim and his Hermes Attempto teammate Kévin Estre (France). Pole-sitter Estre kept up the fight after Thiim overtook him at the end of the finish straight and snatched the lead. The reigning champion of the French Carrera Cup stuck like glue to the rear of Thiim’s 450 hp 911 GT3 Cup and fought like the proverbial lion, but the Dane proved determined to win on his professed favourite circuit.

The pair’s pursuers, René Rast and Sean Edwards, profited from the two-way fight ahead. Rast, double champion of the international Porsche Mobil 1 Supercup, swept almost effortless past young gun Estre in lap seven, whose fierce driving style and various late braking manoeuvres had caused his tyres to badly deteriorate. In the end Sean Edwards closed the gap to Estre. The vice-champion of last season and winner of race two at the season-opening weekend on the Hockenheimring picked the Frenchman off with three laps to the flag. Estre was unable to defend himself anymore and finished in fourth. The newcomer however was delighted to be the best rookie of the day.

Fifth place went to Jaap van Lagen (FE Racing by Land-Motorsport) from the Netherlands closely followed by Michael Christensen. The Porsche Junior from Denmark was in fact the star of Saturday. At only his second Carrera Cup Deutschland qualifying, the 21-year-old turned the fastest time, giving many the seasoned campaigners plenty to think about. Only in the gripping closing minutes was the time undercut by Edwards and Estre. The youngster followed up with an inspired race clinching sixth ahead of his teammate Norbert Siedler from Austria. The ex-Formula 1 test pilot Michael Ammermüller (Germany, SWITCH IT Lechner Racing), his teammate Clemens Schmid (Austria) and Germany’s David Jahn (Attempto Racing) rounded off the top ten. The second Porsche Junior, Klaus Bachler (Austria, Team Deutsche Post by tolimit), finished in 18th. His 911 had been damaged in a light collision in lap one.

The grid line-up for the 80 kilometre race on Sunday is determined by the quickest qualifying time. Sean Edwards and Kévin Estre share the first grid row. In spots three and four sit Michael Christensen and Nicki Thiim, with René Rast and Jaap van Lagen taking up the race from the row three.

The fourth race of the season starts at 11.15 hours tomorrow and will be broadcast live on the official Porsche website (www.porsche.com) in high quality –with editorial clips prior to the actual live-streaming, live-timing and a commentary in German and English. On May 7th, the Monday after the race weekend, news station N24 televises the 30-minute “Porsche Carrera Cup Magazin” at 18.30 hours. Sport1 broadcasts Carrera Cup highlights on 12 May, from 13.15 to 13.45 hours.

Nicki Thiim (winner): “That was pure motorsport, a really great race that was loads of fun. I had to give 100 percent from the first to the last lap. At the beginning I made a braking error and I was really afraid I’d flat-spotted the tyre. I had practiced a couple of starts and that paid off today.”

René Rast (second): “I’m really very happy with second place. It’s the most I could do today. Towards the end I was running close to Nicki but then I made a mistake and lost contact a bit. Tomorrow it’ll be hairy but I’ll try to make up some places.”

Sean Edwards (third): “My start was okay but the first corner was pretty tight. I had to avoid someone and that threw me back into seventh. I then fought my way up the field. The three at the front were so intent on their fight that I managed to easily catch them. The duel with Kévin was great and I finally overtook him towards the end. We touched slightly but it was all fair. Tomorrow I start from pole position. There’s only one thing for it: get a cracking start, pull away and win the race.”

Michael Christensen (Porsche Junior, sixth): “I earned some good points today and that’s important. But I’m not entirely satisfied. I noticed that both the car and I have potential, but in my opinion I made too many mistakes.”

Klaus Bachler (Porsche Junior, 18th): “My start went okay, but I got held up slightly in the first lap and collided with Clemens Schmid on the straight. Afterwards the front right of my car was damaged. I had strong understeer and couldn’t drive as fast anymore. Now I’m just hoping that things will be better tomorrow.”