Double pole for Kirchhöfer in premiere at Zandvoort 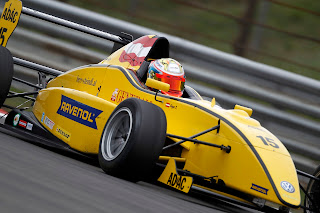 Double pole for Kirchhöfer in premiere at Zandvoort


Zandvoort - Marvin Kirchhöfer has taken both of his first two pole positions in the Formel ADAC premiere at Zandvoort. The 18-year-old, who drives for the Lotus team, will be starting from P1 in the first and second of three races at the famous seaside circuit in the Netherlands. "To take pole twice on the second race weekend of the season is a very special achievement," said Kirchhöfer. "I'm absolutely delighted."


In the first ever visit for the junior series to the challenging 'Rollercoaster in the Dunes', the ADAC Sports Foundation protégé posted a fastest lap of 1:41.670 minutes to qualify 0.531 seconds ahead of Luca Caspari (16, Meerbusch, Mücke Motorsport) who will now start alongside him from the front row in Race 1.


Thomas Jäger (17, AUT, Neuhauser Racing) in his 145bhp Formel ADAC powered by Volkswagen set the third-fastest time in sunny but cool weather conditions at the former F1 track. He is joined on the second row by Jason Kremer (17, Bonn, Mücke Motorsport).


Felix Wieland (15, Rosenheim, HS Engineering) caused a short interruption to qualifying when he spun off track at Gerlachbocht and damaged his car in the gravel bed. Another driver who lost control of his car and thus had to retire from timed practice was Roy Nissany (17, ISR, Mücke Motorsport). The third and final red flag came when Beitske Visser (17, NED, Lotus) left the track and collided heavily with the barriers towards the end of the session. She was given the all-clear by the doctors in the trackside Medical Centre but sent for X-rays at the nearby hospital just in case.


The results from timed practice also determine the starting line-up for the second race at the Circuit Park Zandvoort to be contested on Sunday, with grid positions being allocated on the basis of second-fastest lap times. Here too, Kirchhöfer was fastest with a lap time of 1:41.806 minutes. And once again, he will be joined on the front row by Luca Caspari for Sunday's race which starts at 9:40am.


Marvin Kirchhöfer (18, GER, Lotus), Pole Position Race 1 and 2:
"This is my first year in Formel ADAC. It clearly got off to a great start with my win in the first race at the Motorsport Arena Oschersleben. But now, to take pole twice on the second race weekend of the season is a very special achievement. I'm absolutely delighted. My strategy is just to keep scoring points and then to see how the championship table looks at the end of the year."