DTM/Lausitzring: Quotes after qualifying at the Lausitzring 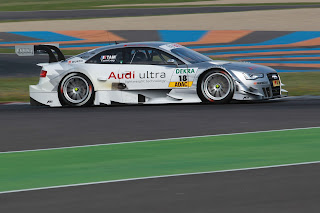 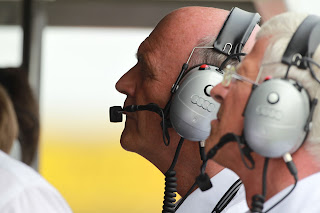 Quotes after qualifying at the Lausitzring


Ingolstadt/Lausitz, May 5, 2012 – Five Audi A5 DTM cars are starting from the
five front rows of the grid at the DTM round at the Lausitzring (Sunday live on
“Das Erste” starting at 13:45 Uhr – local time).


Quotes after qualifying.
Dr. Wolfgang Ullrich (Head of Audi Motorsport): “Getting five of our eight cars into
the third qualifying section was a strong team performance. Unfortunately, only
Rocky (Mike Rockenfeller) then made into the last four and on the second row. We
saw what happened in the race after our good qualifying result at Hockenheim and
will try and do it exactly the other way around here at the Lausitzring. Five cars in
the top ten are good prerequisites for this. Congratulations to BMW on a good
performance.”
Mike Rockenfeller (Schaeffler Audi A5 DTM), grid position 4
“Q3 was very good, the lap was great. I was second and thought it would be enough
for the front row. But in Q4 I had a relatively fair to middling lap; that’s why it
wasn’t enough for more than fourth place. On the whole, I’m pleased. My team gave
me a superb car. We worked hard. Finding balance today wasn’t very easy. As far as
the set-up went, we mainly concentrated on tomorrow. I’m hoping that this will pay
off in the race.”
Edoardo Mortara (Playboy Audi A5 DTM), grid position 5
“I’m very happy with the work we did with the team. After grid position four at
Hockenheim I’m fifth now and on a track that actually doesn’t suit me particularly
well. After the good qualifying event I’m now very optimistic for tomorrow’s race.”
Mattias Ekström (Red Bull Audi A5 DTM), grid position 8
“Eighth place isn’t really exciting. In the last session I made a small mistake; that
can easily happen in the DTM. Unless you’re perfect you’ll suddenly find yourself in
mid-field. Sunday will be a thrilling day.”
Miguel Molina (Red Bull Audi A5 DTM), grid position 9
“For me, things went better than they did at Hockenheim; I’m very pleased. The
front of the field today was extremely close, that’s why unfortunately we didn’t
make it into Q3, but I’m expecting quite a bit for tomorrow.”
Adrien Tambay (Audi ultra A5 DTM), grid position 10
“All in all, I’m not unhappy. I made it into the top ten for the first time, which is
good in such a close field. But I made a small mistake, which was a shame. Now
we’re working for the race to find a good set-up.”
Filipe Albuquerque (TV Movie Audi A5 DTM), grid position 11
“I missed Q3 by three hundredths of a second. The second set of new tires didn’t
work so well. On P11 we’re close to the top ten and are hoping for a good race on
Sunday.”
Timo Scheider (AUTO TEST Audi A5 DTM), grid position 12
“We took a risk in Q1 and went out very late. Due to the temperature the track was
in a different condition than this morning. We had big problems with that. In the
first segment I hit a curb and afterward the steering was crooked. It was repaired
and then the car was okay but I couldn’t attack one hundred percent compared with
this morning.”
Rahel Frey (E-POSTBRIEF Audi A5 DTM), grid position 22
“Unfortunately, we’re on the last position again. Actually, that’s not where I wanted
to be again. As at Hockenheim, we’ll have to give everything for the race and see
what’ll be possible with a good strategy.”
Hans-Jürgen Abt (Team Director Audi Sport Team Abt Sportsline): “This wasn’t a
qualifying event to our liking. We weren’t able to keep the pace of the competition.
We’ve got to carefully analyze this. But those who know us know that we’ll be
fighting hard in the race.”
Ernst Moser (Team Director Audi Sport Team Phoenix): “Qualifying was a thriller
just like the one at Hockenheim. The air is thin and to advance you’ve got to give
everything in each session. Driving throughout without making any mistakes is
extremely difficult. We managed to put both cars into the top ten. Mike
(Rockenfeller) was the only Audi in Q4 but didn’t get it one hundred percent right,
so now he’s on position four of the grid. But last year we started from P4 with
Martin (Tomczyk) as well and won.”
Arno Zensen (Team Director Audi Sport Team Rosberg): “It’s a shame that Filipe
(Albuquerque) dropped out of the top ten by such a narrow margin. Position five
with Edo (Mortara) is the right side of the grid at the start. After he was struggling a
bit in free practice this morning I’m pleased with him now.”
Audi Sport.