Porsche Mobil 1 Supercup, round 3 at the Formula 1 race in Barcelona/Spain 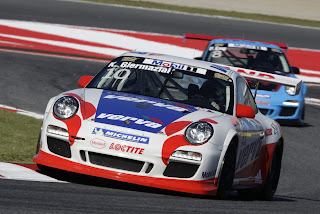 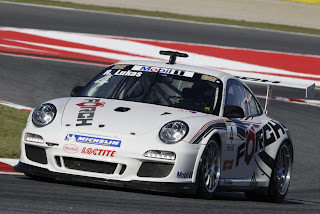 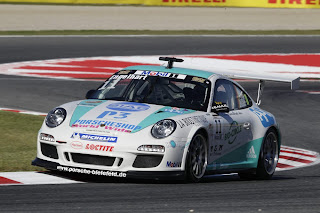 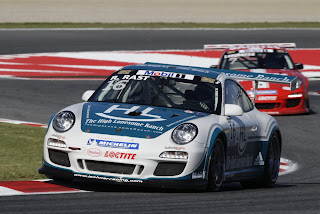 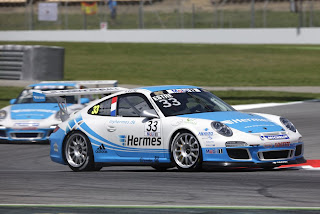 Stuttgart. It has been quite some time since the fight for the pole position has been this tough in the Porsche Mobil 1 Supercup: In the qualification session on the Circuit de Catalunya near Barcelona, Christian Engelhart snatched the first grid spot for Sunday’s race with a three-thousandths of a second advantage. With his Konrad Motorsport-run 450 hp Porsche 911 GT3 Cup, which is based on the street-legal lightweight 911 GT3 RS sports car, the German relegated Kuba Giermaziak from Poland (VERVA Racing Team) to second position. The Pole’s compatriot Robert Lukas (FÖRCH Racing) in third was just one-tenth of a second adrift of the pole-sitter.

In summer temperatures, Christian Engelhart topped the time charts in just the fourth lap, and afterwards withdrew to the pits to watch the rest of the session. Most of his pursuers in the world’s fastest international all-Porsche series were also given orders from their teams to come in early so as to take up the first race of the season on European soil with new tyres.

Behind the leading trio, Britain’s Sean Edwards (Konrad Motorsport), the Barcelona winner from last year, turned the fourth quickest time. Fifth in qualifying went to title defender René Rast (Germany) driving for the Lechner Racing squad, with the Supercup rookie from Denmark Nicki Thiim (Hermes Attempto Racing) sharing the third grid row. The son of former DTM champion Kurt Thiim needed eleven qualifying laps to achieve this. His teammate Kévin Estre (Hermes Attempto Racing) was out on the track just as long. The Frenchman had to settle for seventh place, whilst Norbert Siedler (Austria), who won one of the season-opening double-header races in Bahrain with René Rast, only achieved the eighth quickest time. The fifth grid row is occupied by two Supercup newcomers: Michael Ammermüller (Germany) driving for VELTINS Lechner Racing and Poland’s Patryk Szczerbinski (VERVA Racing Team), the youngest competitor in the Porsche Mobil 1 Supercup at 18 years.

The extremely close level of performance in the flagship of Porsche’s 19 one-make series worldwide is underlined by a glance at the qualifying times: A mere seven-tenths of a second separate positions one and eleven in Barcelona.

Christian Engelhart (pole-sitter): “I’m really happy – especially considering the problem I had with my brakes during free practice. But the boys put in overtime and it paid off. I had an excellent lap today. I was aware that in Barcelona normally nothing more is possible afterwards. Still, I was feeling pretty nervous in the pits waiting for the session to finish. Now I’m looking forward to the race.”

Kuba Giermaziak (second in qualifying): “The first grid row is just what I wanted. I missed out on pole because of a couple of tiny mistakes, but still I’m satisfied. The race will show who’s the best. Most of the drivers are very familiar with Barcelona and are therefore fast here. So that makes it all the more important to take up the race from the first row.”

Robert Lukas (third in qualifying): “We’re of course very pleased. One tenth shy of the fastest, although my first sector wasn’t that great – we can live with this. Now I’m hoping that we are all in a position to turn this good qualifying result into a good race result.”

The race on Sunday is broadcast live on TV stations Eurosport (11.45 hrs) and Sky Sport 2 (11.40 hrs). In addition, Eurosport televises race highlights on Sunday at 23.15 hrs in its “Motorsport Weekend Magazin” programme.