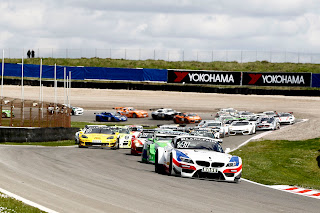 The white and blue livery of BMW dominated the second race of the ADAC weekend at Zandvoort. Dutchmen Jeroen den Boer (24) and Simon Knap (23 / DB Motorsport) claimed their first ADAC GT Masters victory - and a maiden win for the BMW Z4 - on the challenging circuit set amongst the North Sea dunes. "Two pole positions, one win and one P2 finish - it would be hard to imagine a more satisfying home race," said an ecstatic den Boer after receiving the trophy from football ace Lars Ricken. Runners-up in the second Z4 were Dominik Schwager (35, Jedenhofen) and Claudia Hürtgen (40, Aachen / Schubert Motorsport), making it a one-two finish for the Bavarian manufacturer. The third podium spot went to the Mercedes-Benz SLS AMG partnership of Sebastian Asch (25, Ammerbuch) and Maximilian Götz (26 Uffenheim / kfzteile24MS Racing Team).

The Dutch fans watched a BMW trio lead the field until to six laps from the end. But instead of the clean lines of the Z4, the front-runner was the more solidly built BMW ALPINA B6. Reigning champion Dino Lunardi (33, F), whose co-driver Maxime Martin (26, B / ALPINA) had snatched the lead from pole-sitter den Boer on Lap 2, was being harried by Simon Knap. Claudia Hürtgen was the third member of the BMW shootout in P3. But just seven minutes before the end, Lunardi ground to a halt at the side of the track with engine failure.

Knap assumed the lead to seal a victory for the only Dutch outfit in the ADAC GT Masters and the first ever win for BMW in the 'Super Sports Car League'. "The BMW ALPINA was looking very strong," said Knap. "I don't think I could have got past under my own steam. I kept getting close, but I just couldn't overtake. In the end, though, we had a stroke of luck."

The best-performing non-BMW team were Sebastian Asch and Maximilian Götz in their black Mercedes-Benz SLS AMG. Even so, they crossed the line a good 37 seconds behind the race winners. One driver who has good reason to be pleased about his best ADAC GT Masters result to date is Carsten Tilke (28, Munci / Prosperia uhc speed). Thanks to sterling work in the first half of the race by team-mate Christian Abt (44, Kempten), the son of circuit designer Hermann Tilke was able to steer his Audi R8 across the line in fourth position and at the same time celebrate a first win in the amateur rankings. Young Driver AMR will also have been pleased with their best result yet in the ADAC GT Masters, with Kristian Poulsen (36, DK) and Christoffer Nygaard (26, DK) finishing fifth in their Aston Martin V12 Vantage. This propels Poulsen to second in the amateur standings.

Winners of the first race, Diego Alessi (40, I) and Daniel Keilwitz (22, Villingen / Callaway Competition) went on a terrific charge. The pair muscled their way up to sixth place in the Corvette, despite starting from a lowly 22nd place on the grid. Sixth place was enough, though, to ensure that Alessi / Keilwitz left Zandvoort as the new leaders of the ADAC GT Masters. Team-mates Heinz-Harald Frentzen (44, Neuss) and Andreas Wirth (27, Heidelberg) took the chequered flag one position down on them and garnered their first points of the 2012 season. The Top Ten was completed by Christopher Mies (22, Heiligenhaus) / Christer Jöns (24, Ingelheim / Prosperia uhc speed) in the Audi R8, Maximilian Buhk (19, Dassendorf) / Andreas Simonsen (22, S) in the Mercedes-Benz SLS AMG and fellow MB drivers Alexandros Margaritis (27, Cologne) / Lance David Arnold (25, Duisburg / SCHÖNER WOHNEN POLARWEISS Team HEICO).


Disappointment in second race for Bleekemolen and Frankenhout

While two Dutch drivers were enjoying themselves on the podium, fellow Dutchmen Bleekemolen and Christiaan Frankenhout had no reason to celebrate on Sunday. Bleekemolen's Porsche landed in the gravel bed on the first lap after making contact with Frankenhout. And Frankenhout was also denied a result when team-mate Kenneth Heyer ended up in the gravel in the second half of the race too.