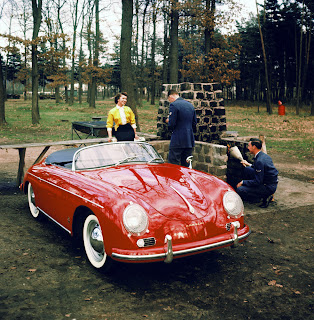 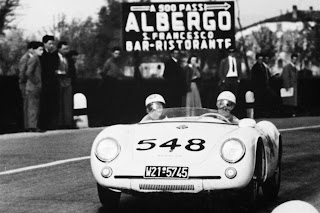 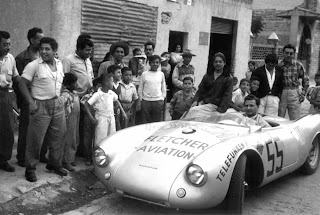 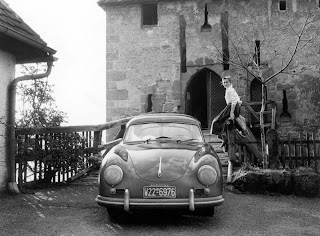 Stuttgart. The legends are under starter’s orders: from 17 to 20 May 2012, the Porsche Museum will be covering the legendary thousand miles of the Mille Miglia with its impressive starting field to date. The famous endurance road race will be contested by two Porsche 550 Spyder, 356 Speedster 1500, 356 Speedster 1600, 356 Speedster 1600 S and 356 Coupé with V-shaped front windscreen, the so-called “Knickscheibe” (bent windscreen). The contest follows the course of the most beautiful roads from Brescia to Rome and back and is among the most important events in the Dr. Ing. h.c. F. Porsche AG, Stuttgart, calendar. The Mille Miglia remains a challenge for vehicles and drivers to this day because the 1,600 kilometre course is covered in only three days and typically traverses different weather zones.

The numbers 550 and 356 represent notable Mille Miglia successes for the Zuffenhausen sports car brand. The first Porsche drivers to taste victory were the two-man team Prince von Metternich and Count von Einsiedel in 1952 in a Porsche 356 1100. The first three places in the 1.1 litre class were taken by sports cars from Zuffenhausen, impressive testimony to the potential of the Porsche 356.

In the following year, 1953, a downright phalanx of no fewer than 18 Type 356 sports cars took their place on the starting line in Brescia. The most successful Porsche teams were Hans Herrmann and Erwin Bauer, who took first place in the two-litre displacement sports car category, with Hans Leo von Hoesch and Werner Engel winning the 1300 cm3 class. The 550 Spyder in 1954 experienced probably the most spectacular exploit. To avoid losing valuable time, works driver Hans Herrmann drove the low-slung mid-engine sports car under a lowered railway barrier just in front of a passing train. The duo Hermann/Linge ended up winning a class victory and an impressive sixth place overall.

Porsche managed to emulate this success in 1955 as well: this time it was Wolfgang Seidel and Helmut Glöckler who clinched victory in the 1.5 litre sports car class in the 550 Spyder; followed by Richard von Frankenberg and Peter Oberndorf together with Rainer Günzler, who won the GT classes up to and above 1300 cm3 in their Porsche 356s.

In 1956, heavy rain denied victory to the Porsche 550 A piloted by Hans Herrmann but Porsche claimed two class victories all the same, thanks to Olof Perssson and Gunnar Blomquist (356 1500 Carrera) and Harald von Saucken and Georg Bialas (356 1500 Speedster). At the last classic Mille Miglia in 1957, victory in the sports car class up to 1500 cm3 went to the Italian Umberto Maglioli in the Porsche 550 A Spyder. Paul-Ernst Strähle and Herbert Linge bagged the hotly contested class victory in the Gran Turismo category from 1300 to 1600 cm3 occupied almost exclusively by Porsche 356s.