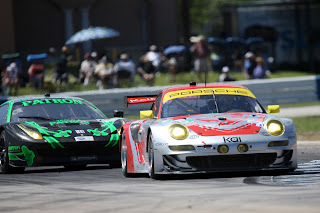 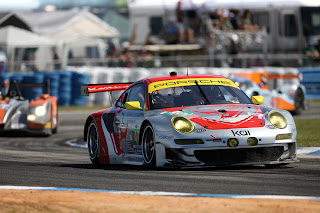 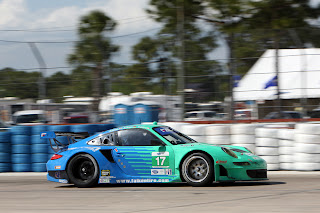 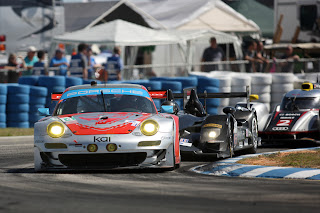 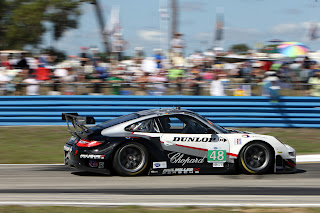 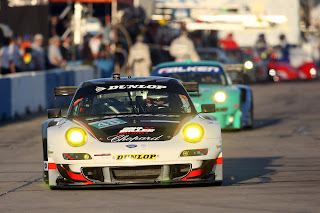 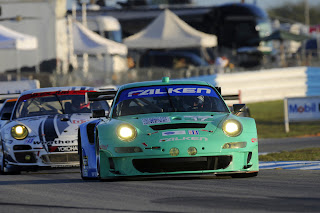 
Challenging six hour hunt in the hills of Monterey

Stuttgart. The Laguna Seca Raceway in the hilly landscape of Monterey, one of the most beautiful race tracks in the USA, hosts round three of the American Le Mans Series on 12 May. Porsche’s factory pilots Jörg Bergmeister (Germany) and Patrick Long (USA) have already notched up three victories at this race on the Californian Pacific coast. The pair crew the new Porsche 911 GT3 RSR fielded by Flying Lizard Motorsports.

Laguna Seca has hosted a round of the American Le Mans Series annually since the championship was founded in 1999. Only Sebring, Mosport and Road Atlanta share a similarly great tradition. The race duration is six hours.

The trademark of this 3.601 kilometre circuit is the legendary corkscrew corner which winds steeply downhill from the highest point of the track. A truly daunting corner. The Laguna Seca Raceway is situated near Monterey, two hours’ drive south of San Francisco. John Steinbeck immortalised this coastal city with his world renowned 1945 novel “Cannery Row”.

As the most successful manufacturer at the American Le Mans Series races in Laguna Seca, Porsche has secured seven GT victories since 1999. Three of those wins alone went to Joerg Bergmeister and Patrick Long. They won in 2005, 2009 and 2010 with the Porsche 911 GT3 RSR and secured the championship titles in each of these years. The Porsche RS Spyder celebrated its race debut in 2005 at Laguna Seca with a victory in the LMP2 class. The sports prototype, developed and built in Weissach, yielded further class wins on this circuit near Monterey in 2006 and 2007.

The race in Laguna Seca starts on Saturday, 12 May, at 13.30 hrs local time (22.30 hrs CEST) and is broadcast on the internet live on www.americanlemans.com. The GT qualifying can be viewed on www.porsche.com/alms-live on Saturday from 02.00 hrs CEST.

Hartmut Kristen, Porsche Head of Motorsport: “In very constructive talks with IMSA in consultation with ACO/FIA, we were able to reach an amendment in the Balance of Performance handicapping system for the 911 GT3 RSR. This involves a new front splitter and a modified rear-wing to generate more downforce. The resultant increase in drag will be compensated by a larger restrictor and hence a slight increase in power output. I’m assuming that these measures will close the gap significantly between the RSR and the competition on this challenging track.”
Jörg Bergmeister: “Laguna Seca is one of the most beautiful circuits on the American Le Mans Series calendar – and one of the coolest. The corkscrew is the greatest challenge obviously, but you shouldn’t underestimate the other corners either. For our California-based team, Laguna Seca is the home race, and for me too really. My wife comes from San Francisco. At this race my in-laws and many of our friends always come to watch. So of course I want to give them a good show.”
Patrick Long: “This track suits us. We’ve won here three times already. So the race is at exactly the right time for us to get into gear for the championship and slash the gap to the leaders with a good result. I only hope that the rule-makers help by giving us a fair chance.”
Wolf Henzler: “I don’t have great memories of Laguna Seca unfortunately. Last year our car was shunted from the side by another competitor and we were forced to retire. I hope this doesn’t happen to us again. The circuit is in a lovely setting and is very demanding for drivers. Everyone loves to compete in Laguna Seca. The race runs over six hours which suits me just fine. As far as I’m concerned, it can’t be long enough.”
Marco Holzer: “This will be only my second start in Laguna Seca. I like the track. It’s really tough and very spectacular, if nothing else due to the Corkscrew. You’re almost always guaranteed an exciting race. The thing that makes it even trickier is the sand that sometimes blows onto the track from the dunes. You have to take particular care. Apart from that, Laguna Seca is a long race and there’s a lot of action happening.”