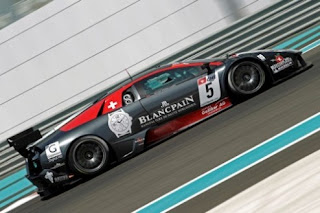 Lamborghini's Swiss Racing Team was satisfied to score points in the GT1 season opener in Abu Dhabi - especially given the team's extremely short preparation for the start of the season.

Swiss Racing opted to switch from Ford to the Lamborghini Murcielago LP 670 for the start of the 2011 season, and while the decision impacted upon its pre-season preparations, it was also vindicated by a points scoring finish for Peter Kox and Karl Wendlinger in the main Championship Race.

The duo, racing in the No. 5 Murcielago, had started the race from 10th position - their finishing berth in the Qualifying Race - but made up several places during the hour-long Championship Race, with Kox eventually collecting the chequered flag in seventh position.

Peter Kox, who joined Swiss Racing this year and has a long history with Lamborghini, was positive about his team's performance on the Yas Marina circuit, saying: "The first weekend included a lot of ups and downs. The team has to learn a lot about the new cars, but the basis and engineering are very good. I am also very happy with my partner (Wendlinger); he has a lot of experience and you could not wish for a better colleague."

Kox's team-mate Karl Wendlinger was also pleased with his team's performance on the Yas Marina circuit: "It was a good start for the team - P7 is not sensational but I am pleased because the car was very fast. If we manage to start from the first three rows we have a very good chance this season."

The weekend proved less fruitful for the No. 6 Lamborghini, which was shared by Sweden's Max Nilsson and the Czech Republic's Jiri Janak, making his GT1 debut. The pair finished just outside the top ten in both races, but both found reasons to be positive from the weekend.

"Everything was new for me: the car, the team, even the track," Jiri Janak explained. "The FIA GT1 World Championship is very hard and you have to be perfect to be among the top pilots. I feel very comfortable with the team though, they did great work and it is fun to work with Max (Nilsson).

Max Nilsson said: "The weekend was very hard because we had no real opportunity to test the cars in advance. I had good speed (during the race) which I am very happy about, but I would want more testing time in order to get to know the cars better."