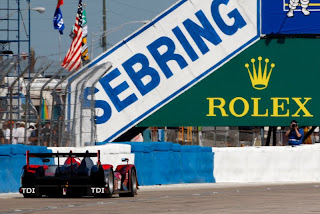 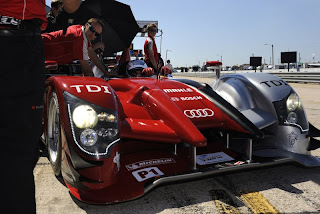 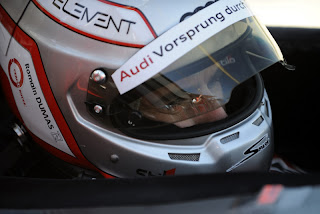 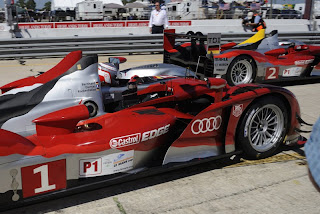 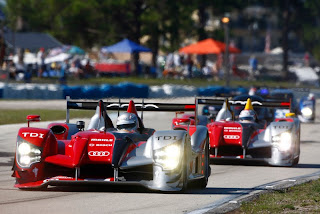 Ingolstadt/Sebring, March 18, 2011 - 30 degrees in the shade and 56 cars on mere six-kilometer long race track - the conditions for the season opener of the Le Mans Intercontinental Cup (ILMC) at Sebring (U.S. state of Florida) could hardly be more difficult. Audi is in a good shape for the classic U.S. endurance race with positions two and four on the starting grid.

In its tenth and last race, the Audi R15 TDI has to run with significantly reduced engine power due to the new technical regulations. Nevertheless, Frenchman Romain Dumas, in his first-ever qualifying session for Audi, was able to split the two new Peugeot 908 prototypes and to conquer an unexpected place on the front row of the grid for Audi Sport Team Joest with the "old" R15 TDI.

During the 15-minute qualifying session, Tom Kristensen was on a similarly fast lap as his team-mate, before losing time in the final corner behind a slower car. Thus the second Audi R15 TDI will start the race from grid position four on Saturday at 10:30 a.m. local time (3:30 p.m in Germany).

Due to the high temperatures and an extremely large starting field of 56 cars from a total of six classes, the Audi team during the four practice days exclusively focused on race preparations of the two Audi R15 TDI cars making them as comfortable as possible for the drivers. Reliability will also play a decisive role over the 12-hour distance on the extremely tough track. Historically, this has been a major strength of the record winning car of the Le Mans 24 Hours.

Dr. Wolfgang Ullrich (Head of Audi Motorsport): "It is certainly a good base for a 12-hour race if you are on the first two rows with both your cars. Especially when you know that it will be a very difficult race with so many cars and certainly a lot of caution periods. Tomorrow it will be important to make no strategic mistakes and that everybody stays calm, even if the things might get hot on the track from time to time."

Timo Bernhard (Audi R15 TDI #1): "We had a good, productive week so far. Also qualifying was really good. Romain (Dumas) put our car on the front row. This is a good starting position. The race will not be easy, because with over 50 cars it gets pretty close on a 6-kilometre track. In some corners you even cannot drive side by side. In addition there is the sand. If you have to go off-line, you quickly collect dirt. We know the reliability of the R15 TDI, so we should have fairly good chances."

Romain Dumas (Audi R15 TDI #1): "To get a front row place on my first ever qualifying for Audi is very nice. My fastest lap was good and I did what I needed to do. It’s been a long time since I did a qualifying session in a sportscar. The Audi was nicely balanced. I don’t think there was much more in the driver and in the car. We’ve done a good job so far. Now we wait to see what will happen in the race but already we know that it will be long, hot and very competitive. It’s not decisive to start second or fourth."

Mike Rockenfeller (Audi R15 TDI #1): "We know from experience that track coditions are constantly changing at Sebring, depending on temperatures and grip levels. I think that Romain (Dumas) did a great qualifying. To start from the front row is always nice. But the race will be damn long. We knew that qualifying is not crucial here. We therefore focused on the race from the very beginning. I hope we can still make up one place."

Dindo Capello (Audi R15 TDI #2): "We have been here for a week and as always, the track is always different. What works one day doesn’t work the next. We are looking forward to the race and know that we have an advantage compared to our competitors with our open car with so many cars on track. We knew that in qualifying we would not be on pole but for the race I think we have a good car to fight until the end for overall victory."

Tom Kristensen (Audi R15 TDI #2): "We’ve worked hard concentrating on optimizing our ‘old weapon’, the R15 TDI, to give it a great farewell in its final race. Qualifying was a good effort - I gave it my best shot. I was on a good lap but caught another car in the last corner. I did well not to lose too much time and still place fourth. A little more would have been possible - but not pole which was not expected, we knew the new Peugeot would be fast over one lap. The race entry must be a record and means that it’ll be a busy and long Saturday for our Audi, crew and us drivers. We have to focus on being consistent, concentrated and keep out of trouble. We have a great team and we know the car has been bullet proof in the past. So fingers crossed."

Allan McNish (Audi R15 TDI #2): "We have worked hard fine-tuning the set-up for the race. This is more important than ever because with over 50 cars on track, traffic is a major part of the event. When you have to drive off line to overtake, you need a car that you know and feel very comfortable with so that has been one of the main objectives this week. We have got a car and a team that has the experience of this event and that will be crucial."

Ralf Jüttner (Technical Director Audi Sport Team Joest): "Romain (Dumas) and Tom (Kristensen) have shown in qualifying, that despite the restriction the R15 TDI is still quite good. The fact that we are not on pole is not a big surprise. But starting from second and fourth positions on the grid is a strong base. It is important that the cars are the way the drivers want them. Tomorrow the last tenth of a second will not be decisive. This will rather be a strategic and tactical race, marked by numerous caution periods. Many incidents will happen. I think for that we have prepared ourselves very well."

Info and Fotos Audi Motorsport/ for Autorized and Acreditated Media Press.
Posted by AmigosRacing/MRS GT. at 17:12