Several teams invited to the next 24 Hours of Le Mans will be seen this weekend at the Paul Ricard circuit in the opening round of the Le Mans Series. 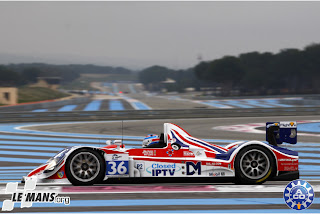 HPD Honda Performance Development will attempt to retain their crown Le Mans next June. To achieve this, the research department of Virgin F1 Racing has worked on various developments described as "a great step forward" by engineer Nick Wirth. After eight seasons with Lola, RML changed track and joined Strakka Racing in the HPD camp.

Oreca The first LM P2 chassis designed by Oreca embodies the technical knowledge accumulated by the men who led the Peugeot 908 to its first title in LMS last year. Race Performance, Boutsen Energy Racing and TDS Racing will make their first steps in LM P2 this weekend. At Le Mans, they will be joined by Signatech and the official Oreca team.

Lola The new Lola B11/40 entered by Pecom Racing is prepared by a major name in endurance: AF Corse. The Italian team, have been at the 24 Hours of Le Mans in GT since 2007, but this time with V8 Judd BMW instead of Ferrari power.

Zytek Formula Le Mans title holder Gary Chalandon rejoins Greaves Motorsport (ex Team Bruichladdich) with whom he finished 10th in 24 Hours of Le Mans 2010 (5th in LM P2). This winter, the integration of the Nissan V8 in the Zytek chassis was particularly careful ... And for good reason: the Japanese manufacturer's engines are built at Zytek!

Norma In pole position in the list of prototype 'reserves' for the 24 Hours of Le Mans, Nantes team Extrême Limite still has a chance to take part. In any case, the dream of young Fabien Rosier (ACO 2006), will make his debut in LM P2 this weekend!