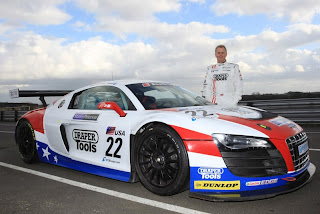 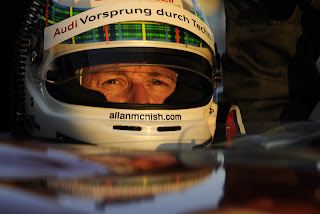 Ingolstadt, March 27, 2011 - Mattias Ekström has some catching up to do physically, just as official dates for the start of the DTM season become the focus of attentions.

Things are going according to plan for Mattias Ekström, whose cast has now been removed 34 days after his sporting accident. His doctors at Movemed in Zurich examined his injured left wrist last Wednesday and were happy with the level of healing. The Audi factory driver’s medical rehabilitation then began that same day.

Flying visit: Audi factory driver Rahel Frey was at Audi Sport in Ingolstadt for two days last week, where the seat of her Audi A4 DTM was customized to fit the 25-year-old driver perfectly.

The 2011 VLN endurance racing season on the Nürburgring got underway last weekend with the first test drives. On Friday Frank Stippler got behind the wheel of an Audi R8 LMS belonging to Phoenix Racing, while on Saturday Mike Rockenfeller and Marco Werner took turns in the GT3. A second Phoenix R8 was put through its paces by Jan Brunstedt of Sweden and Christopher Haase.

Martin Tomczyk went to the Rosenheim-Bad Aibling branch of Sparkasse last Tuesday to give a talk entitled "Achieving success through team spirit—parallels between the trades and motorsport" to 70 guests. At the event to honor newly qualified master craftsmen within the craftsmen’s guilds, the Audi factory driver told the craftsmen and the officers of the chambers of trades and crafts about the impact of team spirit, self-confidence, and changing technology on the trades and motorsport.

On Friday, the TV channel Sport1 welcomed an expert co-commentator to its studios: Audi driver Timo Scheider was there to comment on the first two practice sessions ahead of the Formula 1 race in Melbourne.

Le Mans winner Timo Bernhard came tenth at the ADAC Wikinger Rallye in a Porsche 911 GT3. The Audi sports car driver was hit by a malfunction on the first day of the first stage of this year’s German Rally Championship. But after some repairs, he put in some fast times on the second day, including a special stage best time, and was able to work his way up into the top ten of the overall classification.

An interview with ... Allan McNish

Did the testing of the second development stage of the R18 in Sebring pay off?
It was a very helpful session. We spent four days testing, from Monday to Thursday, and all the Audi sports car drivers were involved. The weather was mainly hot and there was high humidity—all combined with the mercilessness of the Sebring racetrack. So we had authentic conditions as if it were a race weekend. And on one of the days, the track was also slightly wet for a time.

What did the R18 feel like?
I was pleasantly surprised, because the windscreen of enclosed vehicles tends to get dirtier quicker when it’s raining, which means cars without a windscreen are then at an advantage. The last time I drove an enclosed prototype in wet conditions was in 1999. And I was amazed at the progress that has been made since then, because I felt really good in the Audi R18, even in these conditions. It felt great to drive in dry conditions too and the vehicle responded with precision.

So what’s your conclusion after testing the second evolution?
On the Monday, I got behind the wheel of the R15 TDI for comparison purposes. The Audi R18 is one step ahead of the R15 TDI in an incredible number of areas—even though the rules stipulate a much smaller and therefore less powerful engine. It goes without saying that we are still learning a lot about this new car and haven’t yet put it to the test against the competition.

Coming up next week