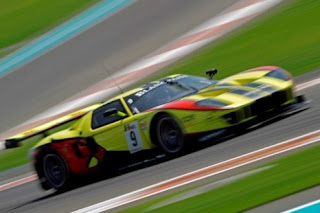 Ford's Belgian Racing squad experienced a frustrating weekend in Abu Dhabi, as reliability issues hampered both their preparations and their outright pace.

The team also suffered late drama when it announced Vanina Ickx - daughter of Belgian's F1 race winner Jacky Ickx - would be unable to partner Antoine Leclerc due to safety concerns relating to her driving position. Vanina will return for Zolder, but the team called up Fabien Giroix to replace her for Abu Dhabi.

Despite such frustrations, the team worked with unstinting commitment throughout the weekend, and were rewarded when Milos Pavlovic - making his GT1 debut - and Martin Matzke guided their No. 12 Ford GT to 12th place in both the Qualifying and Championship Races.

Serbia's Milos Pavlovic, and his stable-mate Antoine Leclerc in the No. 9 Ford GT, spoke to GT1world.com about their reactions to Abu Dhabi, and their hopes for Zolder - Belgian Racing's home round.

Q: What are your thoughts on the race in Abu Dhabi and in what areas can you further improve performance?

Antoine Leclerc: This is consistent with what I expected! As the team, I had many things to discover and understand. The week-end was so complicated. By the time everything is set up, we really started to work during the warm up and qualifying race. I think we’ll be a little better than Abu Dhabi but we haven’t had much time to work. We will be in the match in Portimao after a good practice session.

Milos Pavlovic: The race in Abu Dhabi was my first experience in a GT car. The weekend didn't go as expected as we had too many technical issues that compromised our final result. Still, the positive note comes from the fact that I can feel that the potential is there. We just need a trouble free weekend and that is what I'm hoping for.

Q: What experience have you had on Zolder Circuit and do you think your car will suit this type of track?

AL: I’m not familiar with the track, I have only ever done ten laps a few years ago in a legend car. But the team will be at home and they know the circuit perfectly so the car should have a good balance.

MP: I have already raced a few times at Zolder, in 2005 and 2006 in World Series by Renault and 2004 in World Series Light. Considering that this is going to be our team's home race, I really hope that our Ford GT40 characteristics will suit the circuit. I believe it will.

Q: What are your objectives for the race weekend?

A: To continue to work and store information for Portimao. And we will do our best with Vanina on the Zolder circuit in Belgium - for the team and for our sponsors!

MP: I just hope to have a trouble free weekend. The rest will come by itself!