Second place for Porsche in the new GTE-AM class 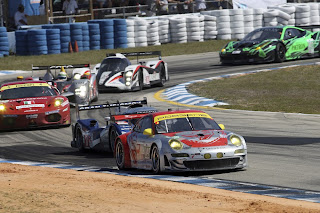 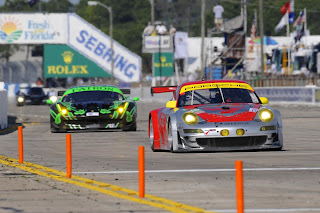 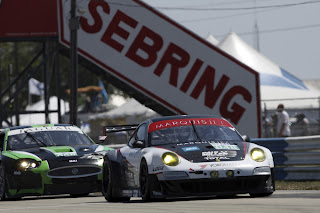 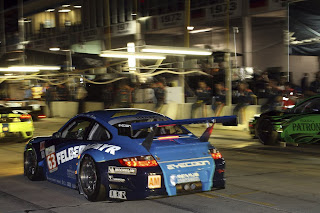 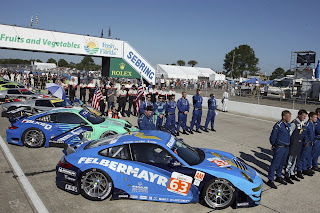 Second place for Porsche in the new GTE-AM class

Stuttgart. At the Sebring 12 hour race, Porsche took off into the 2011 season of the Intercontinental Le Mans Cup and the American Le Mans Series by clinching second place in the new GTE-AM class. Sharing the cockpit of the Porsche 911 GT3 RSR fielded by Proton Competition was Porsche works driver Richard Lietz (Austria) with his teammates Christian Ried (Germany) and Gianluca Roda (Italy).

“Our car ran well until we experienced some clutch problems towards the end of the race,” said Richard Lietz. “The new GTE-AM class, in which only one professional driver is permitted per vehicle, is very interesting. As always, the Sebring event was huge fun. My driver colleagues drove consistent times and didn’t make one error.”

In the GT class of the American Le Mans Series, Porsche works drivers Joerg Bergmeister (Germany) and Patrick Long (USA) claimed sixth place. At the wheel of the Flying Lizard Motorsports 911 GT3 RSR, the title defenders found themselves a lap down early on in the race run in hot temperatures after Patrick Long received a one minute stop-and-go penalty for a collision. Later on, a hose on Joerg Bergmeister’s cooling vest came loose and the leaking water caused misfiring, making an unscheduled pit stop necessary. Through this, they lost another lap to the front-runners. “The opposition is so strong this year that you simply can’t make up such a shortfall. In this respect, I’m quite satisfied with sixth place,” said Joerg Bergmeister. “We experienced bad luck today and I hope that we’ll be able to balance things out over the course of the season.”

Despite putting in a strong drive with Team Falken’s Porsche 911 GT3 RSR, Porsche factory pilot Wolf Henzler (Germany) and his teammates Martin Ragginger (Austria) and Bryan Sellers (USA) were not rewarded with a good result. The new squad under Derrick Walker made an impressive debut in the American Le Mans Series, and worked highly professionally with excellent pit stops at their first race outing. Over long stretches, their 911 GT3 RSR was the fastest Porsche in the field, but did not reach the finish line due to gearbox problems. “Our teamwork went very well,” said Wolf Henzler. “Above all, we’ve made huge progress with the tyres compared to last year. We can build on this over the rest of the season.”

In the second Porsche 911 GT3 RSR of Flying Lizard Motorsports, Porsche works driver Marco Holzer (Germany) and his American teammates Seth Neiman and Darren Law saw the flag in seventh place. “Obviously, we imagined our start to the season differently,” said Porsche head of motorsport, Hartmut Kristen. “Still, sixth place for Flying Lizard Motorsports and the corresponding championship points are very important for a successful title defence. Sadly, the collision with a competitor, the leaking cooling vest and the resulting electrical problems prevented a better result. Congratulations to the Proton Competition squad for their second place at the premiere of the GTE-AM class. The other Porsche teams also performed excellently at this extremely competitive race.”

Round 2 of the American Le Mans Series will run on 16 April on the street circuit of Long Beach in the US State of California.

GT class: This most popular class amongst car manufacturers is traditionally very well supported: Slightly modified standard sports cars with 440 to 460 hp and a minimum weight of 1,125 – 1,325 kilograms (e.g. Porsche 911 GT3 RSR).
GTE-AM class: Like the GT class, but the regulations require that each vehicle must have one professional driver at the most.
GTC class: This class is reserved for vehicles from one-make race series (e.g. Porsche 911 GT3 Cup).
LMP1 class: Sports prototypes with up to 750 hp and a minimum weight of 900 kilograms (petrol engines) or 930 kilograms (diesel engines).
LMP2 class: Sports prototypes with ca. 440 hp and an 825 kg minimum weight.
LMPC class: Prototype brand trophy series for the ORECA FLM 09.

All race cars start together but are classified separately. This ensures racing that is exciting and constantly changing with many overtaking manoeuvres. Points are awarded only for placings in each class.