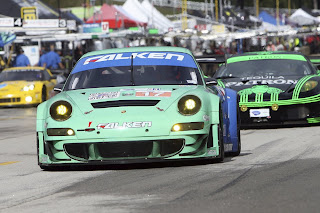 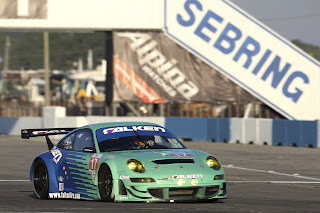 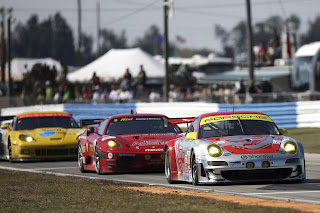 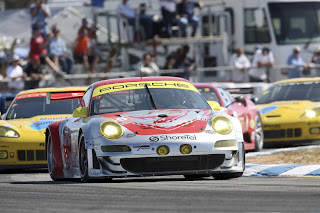 Stuttgart. A true classic traditionally kicks off the American Le Mans Series season: The 12 Hours of Sebring, run for the 59th time on the Sebring International Raceway in the heart of Florida on 19 March, is the oldest and toughest sports car race in the USA. Six Porsche works drivers helm customer-run Porsche 911 GT3 RSR, including the GT class title defenders Joerg Bergmeister (Germany) and Patrick Long (USA).

The world’s most famous 12 hour race celebrated its inauguration on 15 March, 1952, and, together with the 24 hour events in Daytona and Le Mans, is one of the most traditional long distance classics. Immortalised on the winners’ list are racing legends like Juan Manuel Fangio, Phil Hill, Dan Gurney, Jacky Ickx and Mario Andretti. Race mad Hollywood stars have also competed, like Paul Newman and Steve McQueen, who finished second overall in 1970 with a Porsche 908.

The 5.954 kilometre Sebring International Raceway, an airfield track in 17 corners, is infamous for its bumpy surface. Added to this is the often very high temperature. These stress factors on man and machine make this race a real test of endurance leading up to the Le Mans 24 Hours.

Hartmut Kristen, Porsche Head of Motorsport: “Sebring is a real highlight with which to kick off the new season. The race is the first important chance to see where we stand on a very demanding circuit. I think we’re all quite interested to see what the work over winter has yielded.”
Joerg Bergmeister: “It’s the toughest race of the season. In Sebring, extra points are awarded, so that alone is enough to make a good result especially important. A retirement here would be a real handicap in your bid for the title. We’ve done a lot of testing and are well prepared. The improvements on our 911 GT3 RSR are very promising. But it’ll be in qualifying at the earliest when we see if we’ve done everything right.”
Patrick Long: “This is our third season with Flying Lizard Motorsports, so we all know how to work well together. This is particularly advantageous with pit stops, which can play a decisive role at such a long race.”
Marc Lieb: “Sebring is often full of surprises. It has the fullest grid of the year. Good preparation is important for success, but it’s no guarantee.”
Wolf Henzler: “This is the race with the best drivers and the most spectators. The fans’ enthusiasm is fantastic. Americans simply want to see sports cars. Lots of fans even came and watched us testing.”
Marco Holzer: “This is my first time in Sebring and I can’t wait. I’ve just contested Daytona and now here’s the next classic – that’s the sort of start to the season that every race driver dreams of.”
Richard Lietz: “Fantastic race, fantastic fans. You’re always driving at the limit and you can’t afford to make one mistake. Only then do you have a chance. It’s a great challenge, but one that is huge fun.”

The most successful GT race car of the last years takes off into the new season with a raft of improvements. The output of the four-litre, six-cylinder boxer engine has increased to 455 hp (335 kW). Priority in the further development of the car was given to the newly designed aerodynamics at the front and rear. Again in 2010, the 911 GT3 RSR won the environmental "Michelin Green X Challenge” classification, as the GT vehicle with the best overall efficiency in the American Le Mans Series.

With 18 overall and 64 class victories, Porsche is the most successful manufacturer in the history of the Sebring 12 hour race. The first overall win in 1960 went to Hans Herrmann and Olivier Gendebien with the Porsche RS 60. In an unprecedented winning streak from 1976 to 1988, Porsche celebrated 13 overall wins in a row with drivers like Hurley Haywood, Al Holbert, Brian Redman, Bob Wollek, A.J. Foyt, Bobby Rahal and Hans-Joachim Stuck. The most recent overall win for Porsche was in 2008 with Timo Bernhard, Romain Dumas and Emmanuel Collard at the wheel of the RS Spyder fielded by Penske Racing. That same year, Joerg Bergmeister, Wolf Henzler and Marc Lieb also secured GT2 class honours with the 911 GT3 RSR run by Flying Lizard Motorsports.

The 12 Hours of Sebring starts on Saturday, 19 March, at 10.30 hours local time (16.30 hours CET). The GT qualifying on Friday will be broadcast on the internet from 21.00 hours CET on www.porsche.com/alms-live.

GT class: This most popular class amongst car manufacturers is traditionally very well supported: Slightly modified standard sports cars with 440 to 460 hp and a minimum weight of 1,125 – 1,325 kilograms (e.g. Porsche 911 GT3 RSR).
GTE AM class: Like the GT class, but the regulations dictate that each vehicle must have one professional driver at the most.
GTC class: This class is reserved for vehicles from one-make race series (e.g. Porsche 911 GT3 Cup).
LMP1 class: Sports prototypes with up to 750 hp and a minimum weight of 900 kilograms (petrol engines) or 930 kilograms (diesel engines).
LMP2 class: Sports prototypes with ca. 440 hp and an 825 kg minimum weight.
LMPC class: Prototype brand trophy series for the ORECA FLM 09.

These nine races in the USA and Canada make up the 2011 calendar of the American Le Mans Series: