Nicolas Prost : 'The objective is the title' 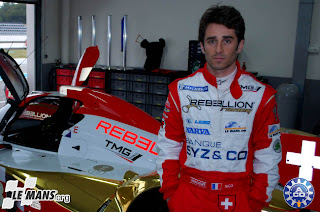 After an encouraging seventh place finish at Sebring for the opening of the Intercontinental Le Mans Cup for Rebellion Racing and new partner Toyota, he is aiming high for the 2011 Le Mans Series season, which begins on 3rd April at Le Castellet.

This collaboration with Toyota is it for the long term?
Nicolas Prost: "For the moment the contract is two years. We have a record worthy of a factory team and the people of Toyota have worked hard to develop the engine. It is light, rigid and improves the balance of the car. "

What was the contribution of Jean-Christophe Boullion, who joined the Rebellion Racing last year?
"First of all, Jean-Christophe has been a benchmark for the team. In 2009 he became the best driver in the Le Mans Series, he sets the standard because we had a lot of young drivers in the team. Everyone is very close in performance but the presence of Jean-Christophe confirms this. He brought all his experience of this type of racing, which is beneficial for the team. "

What of Le Mans and the presence of Guy Smith, winner of 24 Hours in 2003?
"Guy is a fast driver and very friendly. In addition, he is familiar with the Lola in the the United States. He was able to compare our car with that of Dyson Racing and tell us what was right and it was not good. "

Do you think endurance racing is real alternative for young drivers who have more opportunities in the car?
"I think it has always been the case a little, because the prototypes were always cars most similar to single-seaters. With the arrival of new manufacturers, endurance is clearly a starting point to grow from and becomes more and more interesting. Le Mans Series, the goal of Rebellion Racing is the title, and in ILMC, aim to win in mid-season. "

What special memories or stories come to mind of Hugh Hayden, a founder of the team who died last year?
"When I first went to England to mould my seat. That's when I met Hugh for the first time. That evening, I had to fly back to Johannesburg for an A1 GP race and Hugh took me to Heathrow. We really got know each other in the car and I quickly realized he was a true gentleman and someone you could count on. "

Photo: Le Castellet, TEST LE MANS SERIES, March 11, 2011. Nicolas Prost Rebellion and the team will be back racing at the Circuit Paul Ricard this weekend for the opening of the Le Mans Series 2011.